Presentation on theme: "PHOTOSYNTHESIS. WHEN IS FOOD NOT FOOD?? Some people think that the plant food they give to house and garden plants is food for the plants. It isn’t!!"— Presentation transcript:

2 WHEN IS FOOD NOT FOOD?? Some people think that the plant food they give to house and garden plants is food for the plants. It isn’t!! Plants make their own food – in the form of sugars – using water, carbon dioxide, and sunlight. So what is the “food” that people add to plants? It’s fertilizer. Fertilizer is a mixture of minerals, such as potassium, calcium, and phosphorus. It helps plants grow but does not supply them with energy as food does. Farmers add fertilizer to soil to grow better quality crops. People do the same to grow bigger and healthier plants at home.

3 WHEN IS FOOD NOT FOOD?? Discussion Questions: What is fertilizer? What do people keep their house plants in? What is the main difference between houseplants and a farmers crops? Why do you think people may feed their houseplants more often that farmers fertilize crops?

4 HOW DO LIVING THINGS GET ENERGY FROM THE SUN? Every living thing needs energy!! ALL cells need energy to carry out their functions, such as making proteins and transporting substances into and out of the cell. Energy used by living things comes from their environment. Some animals get their energy from the grass. Some animals get their energy from eating other animals. Where does energy start?

5 THE SUN AS AN ENERGY SOURCE Energy from sunlight is captured during photosynthesis. Photosynthesis comes from the Greek words photos – means “light” and syntithenai – means “putting together” Photosynthesis: The process by which a cell captures energy in sunlight and uses it to make food.

6 THE SUN AS AN ENERGY SOURCE ** Nearly all living things obtain energy either directly or indirectly from the energy of sunlight that is captured during photosynthesis** Examples: Grass obtains energy DIRECTLY from sunlight because grass makes its own food during photosynthesis. Give your own example of something obtaining energy directly from sunlight.

8 PRODUCERS AND CONSUMERS Autotroph (Producer) : An organism that makes their own food through photosynthesis.

9 PRODUCERS AND CONSUMERS Heterotroph (Consumer): An organism that cannot make its own food. Most heterotrophs obtain food by eating other organisms.

10 WHAT HAPPENS DURING PHOTOSYNTHESIS? **Remember – Plants make their own food!!** HOW DOES THIS HAPPEN????? During photosynthesis, plants and some other organisms absorb energy from the sun and use the energy to convert (change) carbon dioxide (CO 2 ) and water (H 2 O) into sugars and oxygen. Two stages of photosynthesis: 1.Plants capture the sun’s energy 2.Plants produce sugars

11 WHAT HAPPENS DURING PHOTOSYNTHESIS? Stage 1: Capturing the Sun’s Energy Energy from sunlight is captured (in plants, this process occurs mostly in the leaves) How?????? Chloroplasts: Green organelles inside plant cells. Green color comes from pigments that absorb light. Chlorophyll: The main pigment for photosynthesis in chloroplasts. Chlorophyll captures light energy (converts this energy to a form that is used in stage two). Water in the chloroplasts is split into Hydrogen (H) and Oxygen (O) Oxygen (O) is given off as a waste product (Hydrogen (H) is used in stage 2)

12 WHAT HAPPENS DURING PHOTOSYNTHESIS? Stage 2: Using Energy to Make Food Cells produce sugars. How???? Cells use Hydrogen (H) that came from the splitting of water in Stage 1and also uses Carbon Dioxide (CO 2 ) from the air.

13 WHAT HAPPENS DURING PHOTOSYNTHESIS? CO 2 enters through small openings on the undersides of the leaves and moves into the chloroplasts. Powered by energy captured in Stage 1, H and CO 2 go through a series of reactions that result in sugars. Products of Photosynthesis: 1. Glucose (type of carbohydrate) is the sugar that is produced. 2.Oxygen (O 2 ) leaves through the openings on its underside of the leaf.

14 PHOTOSYNTHESIS Almost ALL the oxygen in Earth’s atmosphere is produced by living things through the process of photosynthesis!! Photosynthesis Equation Raw MaterialsProducts How many Carbon (C), Oxygen (O), and Hydrogen (H) atoms are on the Raw Materials side? Product side?

15 PHOTOSYNTHESIS There are the same amount of atoms on the raw material side as the product side…. They are just rearranged.

Download ppt "PHOTOSYNTHESIS. WHEN IS FOOD NOT FOOD?? Some people think that the plant food they give to house and garden plants is food for the plants. It isn’t!!" 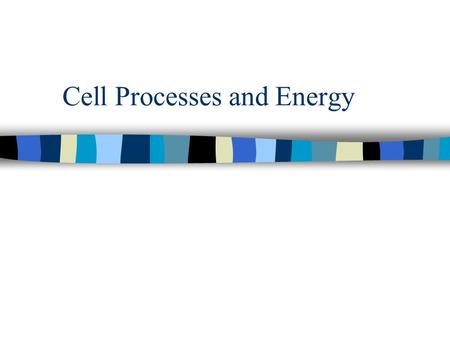 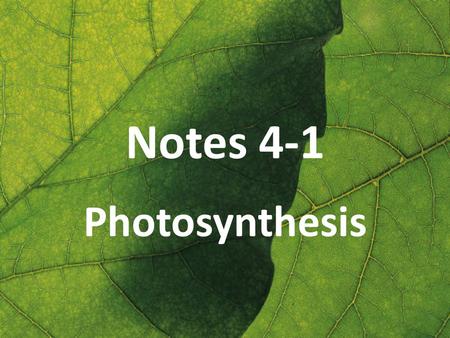 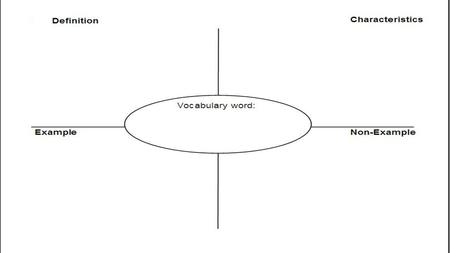 Photosynthesis: a series of chemical reactions that convert light energy, water, and carbon dioxide into the food-energy molecule glucose and give off. 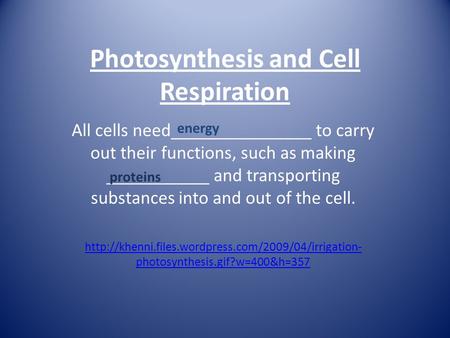 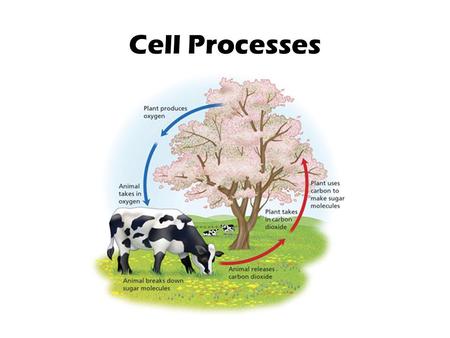 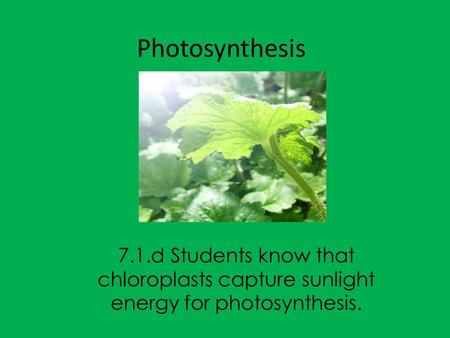 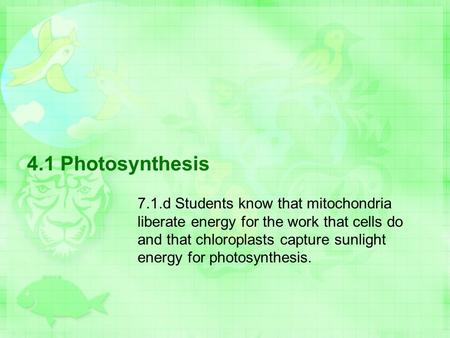 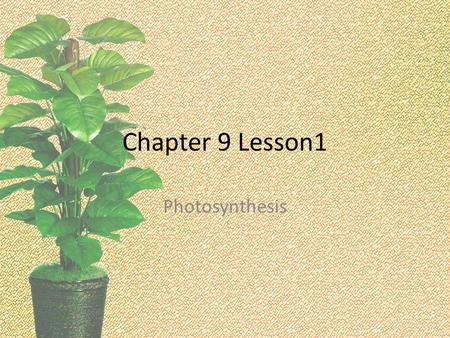 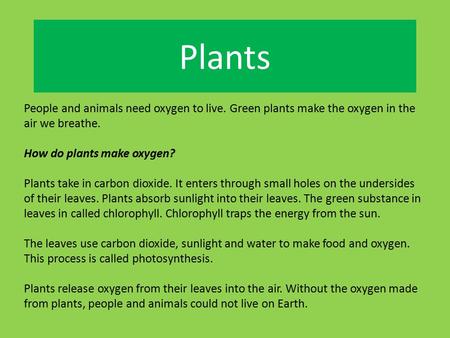 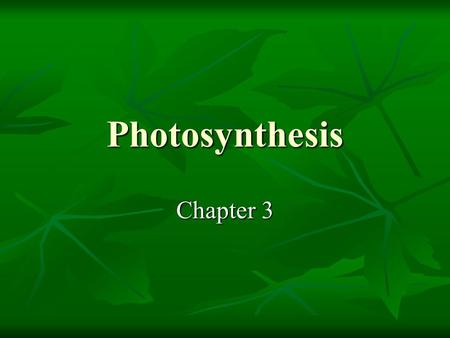 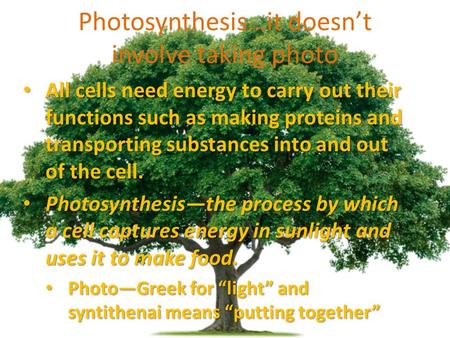 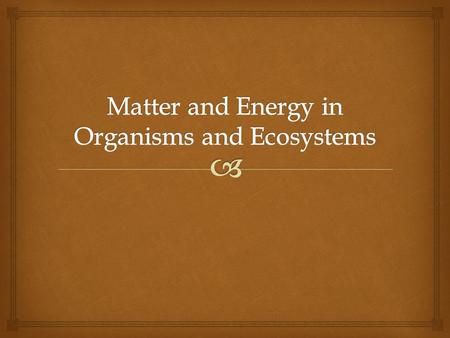 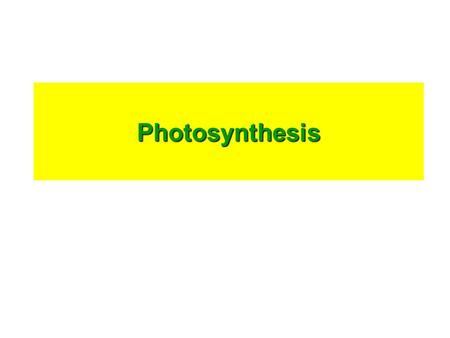 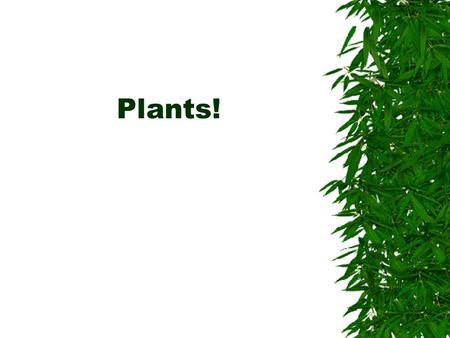 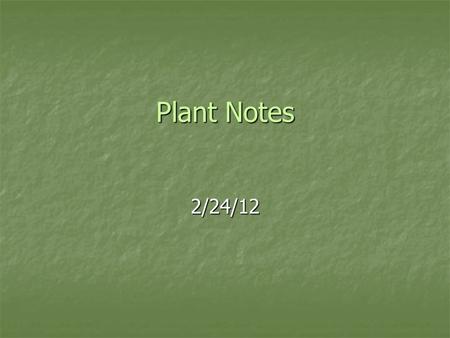 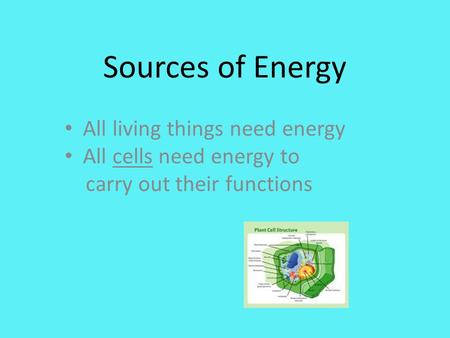 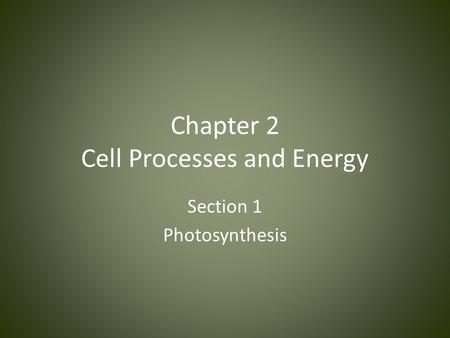 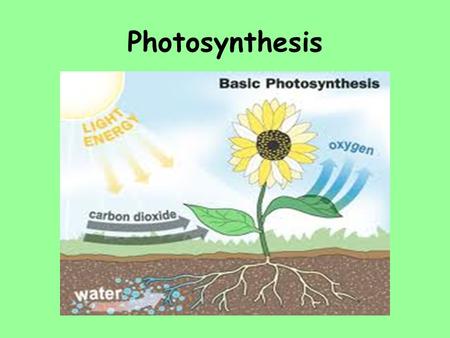 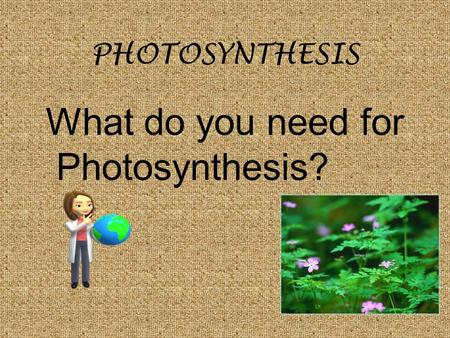 PHOTOSYNTHESIS What do you need for Photosynthesis? 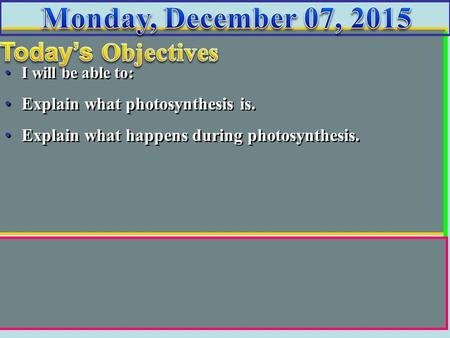