2 William Shakespeare was born April 23, 1564, in the town of Stratford upon Avon.

3 Trivia... Galileo, the famous scientist, was also born in this year.

5 Siblings He had 3 brothers and 4 sisters. He was the third born, but the oldest.

6 Education Since dad was an alderman and property owner, Will received a free formal education through grade school where he studied all the classics of literature.

7 Romance? He married Anne Hathaway in November 1582 at age 18, because she was pregnant at age 26 with their first child Susanna.

8 More Children They later had twins named Hamnet and Judith in 1585.

9 Tragedy In August of 1596, at age 11, Hamnet died from Bubonic Plague, leaving Shakespeare devastated, and with no heir. In October, the Shakespeare family became gentry; Shakespeare's father was granted a coat of arms and William would now have no one to inherit the honor.coat of arms

11 Whatever Did He Do? Because of his later writings, we can guess that he might have been a farmer, a soldier, a teacher, a sailor, a glove-maker or an actor during this time.

12 The Reappearance In 1594, he was working in London working as an actor and playwright.

14 More of the Plague Between 1593-1594, the theater was closed because of it. This may explain why a fascination with death appears throughout his plays.

15 The Plagiarist Romeo and Juliet was written between 1594-1596 during the “Lyrical Years” of his 30s. It was based on an Italian poem called “The Tragical Story of Romeus and Juliet” which was based on the Greek story of “Pyramus and Thisbee” written in 400 CE or 5 century.

16 Work Some of the theaters that Shakespeare worked in were The Rose, The Curtain, The Swan, and The Theatre.

17 $$$$$ He made money in those theaters in three ways. As an actor, playwright, and shareholder in the theater. But his career of choice was acting.

18 The Globe In 1599, The Globe theater was built in the shape of an Octagon on the River Thames.

20 The Globe In the theater, they served such refreshments as nuts and fruit and ale, and the poor people who brought their rotten fruits and vegetables to throw at plays they didn’t like were called the groundlings or penny-stinkers.

23 Shakespeare also wrote Sonnets, or 14-line poems. The subjects of these poems were: The Young Man and The Dark Lady.

24 In 1603, Queen Elizabeth I died and King James I ascended the throne as the monarch of England. Shakespeare and his players changed their name from “Lord Chamberlain’s Men” to “The King’s Men.”

26 Shakespeare died on his birthday, in 1616, and was buried in Holy Trinity Church in Stratford.

27 In his will he left his property to Susanna who was married to a prominent doctor, 300 English pounds to his daughter Judith who was scandalously married at age 32 to a winemaker, and his second best bed to his wife Anne (because it was her favorite). 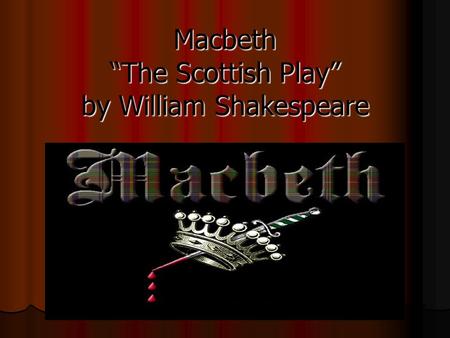 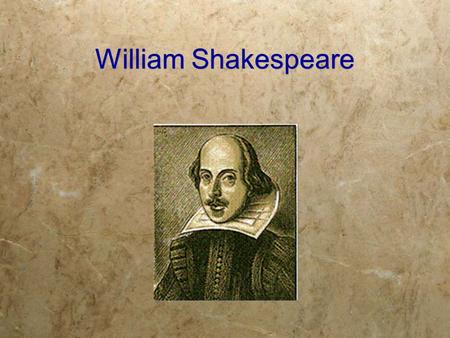