3 Creation of a National Judiciary
The Framers created the national judiciary in Article III of the Constitution. There are two court systems in the United States: the national judiciary that spans the country, and the courts run by each of the 50 States. The Constitution created the Supreme Court and left Congress to establish the inferior courts — the lower federal courts. There are two types of federal courts: (1) constitutional courts and (2) special courts.

5 Federal Court Jurisdiction
Jurisdiction is defined as the authority of a court to hear (to try and to decide) a case. Article III, Section 2 of the Constitution provides that the federal courts may hear a case because of either: the subject matter or the parties involved in the case.

7 Appointment of Judges The power to appoint judges to federal courts falls on the President. The President nominates Supreme Court justices, as well as federal court judges, who are then subject to the approval of the Senate. Most federal judges are drawn from the ranks of leading attorneys, legal scholars and law school professors, former members of Congress, and State court judges.

8 Terms and Pay of Judges Judges appointed to the constitutional courts, including the Supreme Court, are appointed for life. Judges of constitutional courts may be removed only by their own will or through impeachment. Only 13 federal judges have ever been impeached, and, of them, seven were convicted. Judges who sit in the special courts are appointed for terms varying from 4 to 15 years. Congress determines salaries for federal judges.

9 Court Officers Federal judges have many levels of support in order to fulfill their roles: United States magistrates are appointed by each federal district court judge to handle duties ranging from issuing warrants to setting bail in federal criminal cases. Each federal district judge appoints one bankruptcy judge for that district. The President nominates, and the Senate approves, a United States attorney for each federal judicial district. The President and the Senate also select a United States marshal to serve each of the district courts. Marshals act much like county sheriffs in regard to federal crimes.

12 The District Courts Federal Judicial Districts
The 94 federal judicial districts include at least one district in each State, the District of Columbia, and Puerto Rico. Larger and more populous States are divided into two or more districts, reflecting the larger amount of judicial work done there. District Court Jurisdiction District courts have original jurisdiction over most cases that are heard in federal courts. The district courts hear a wide range of criminal cases and civil cases. A criminal case, in the federal courts, is one in which a defendant is tried for committing some action that Congress declared by law to be a federal crime. A federal civil case is one which involves noncriminal matters.

13 The Courts of Appeals The courts of appeals were created in 1891 to handle much of the burden that the Supreme Court faced in ruling on appealed cases. Appellate Court Judges Altogether, 179 circuit judges sit in the 12 appeals courts. A Supreme Court justice is also assigned to each of the circuits. Appellate Court Jurisdiction The courts of appeals only have appellate jurisdiction, hearing cases on appeal from lower federal courts.

27 The District of Columbia Courts and the U.S. Tax Court
As directed in the Constitution, Congress established a system of courts for the “Seat of Government of the United States.” The District of Columbia Courts handle all local judicial matters for the district, including trials and appeals. The United States Tax Court The U.S. Tax Court was created by Congress in 1969. The Tax Court hears civil but not criminal cases involving disputes over the application of the tax laws. Its decisions may be appealed to the federal courts of appeals.

28 Military Appeals Courts
The Court of Appeals for the Armed Forces This court is a civilian tribunal, a court operating as part of the judicial branch, entirely separate from the military establishment. The court reviews the more serious convictions of members of the armed forces at a court-martial, or trial involving military law. The Court of Appeals for Veterans Claims hears cases in which individuals claim that the Department of Veterans Affairs has denied or otherwise mishandled valid claims for veterans’ benefits.

29 Assessment 1. The U.S. Court of Federal Claims handles
(a) citizens wishing redress from the government. (b) veterans affairs. (c) cases heard in the District of Columbia. (d) cases heard in U.S. territories. 2. A court-martial is a court which tries cases involving (a) civilians. (b) military personnel. (c) diplomats. (d) ambassadors. 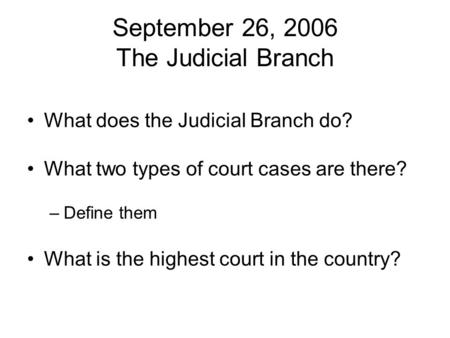 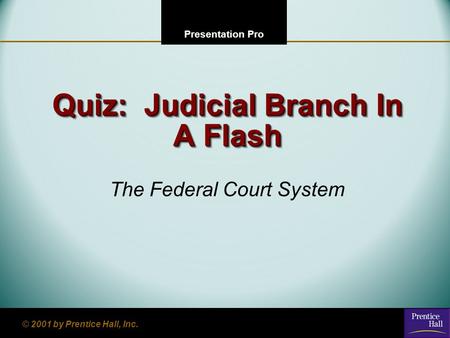 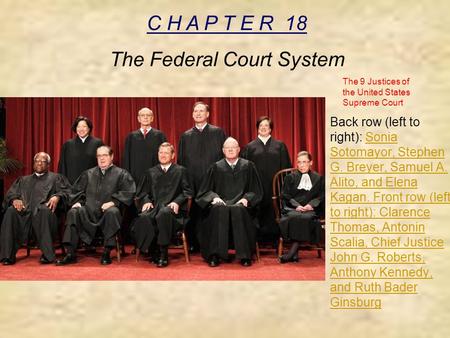 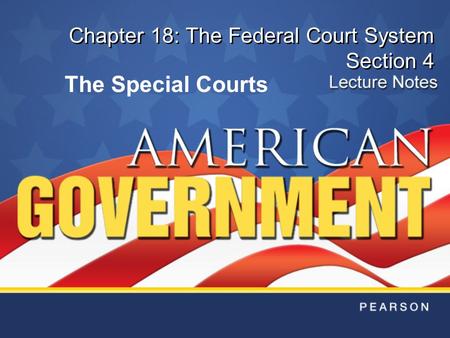