2 Sir Gawain and the Green Knight
“Pearl Poet” or the “Gawain Poet” Authorship for SGGK is typically considered anonymous, or it is attributed to a mysterious, unknown poet since named “The Pearl Poet.” This poet wrote an alliterative poem titled The Pearl, and a similar dialect and style is present in several other works, including SGGK. He was certainly English and spoke and wrote in Middle English. This poet is sometimes referred to as the “Gawain Poet.” This poet seems to have been a follower of Chaucer. He seems to have a knowledge of Christian theology and a deep vocabulary and poetic sense. There is still no agreement, however, on the authorship of SGGK.

3 Sir Gawain and the Green Knight
Time Period Medieval (Middle Ages) ca. 476 A.D. – 1453 A.D. This is the time between antiquity (Classical Greece, the Roman Empire, etc.) and the Renaissance. More specifically, 476 A.D. marks the fall of the Western Roman Empire and 1453 A.D. marks the fall of the Eastern Roman Empire and a rebirth of the cultural movements of antiquity. The Middle Ages stretches the period “between,” and encompasses a great deal of literature of both secular and religious works, including “adventure narratives.” The Middle Ages is a millennium-long period that spans all of Europe in terms of culture. Gawain and the Green Knight would fit into the “high” Middle Ages.

4 Sir Gawain and the Green Knight
Adventure Narratives of the Middle Ages Adventure narratives in this time period were dominated by stories from three areas or “matters”: The Matter of Rome: stories of ancient Roman heroes involved in exciting adventure, physical or involving love – “Romance”

6 The Arthurian Legend – The Past and Present
Somehow the Arthurian legends actually developed in the ancient world, probably with the Celts who would eventually make up Britain. Basic elements of the Arthurian legend were first introduced into the literary world by Geoffrey of Monmouth’s History of the Kings of Britain (ca. 1139) Poetic translation of Roman de Brut by Layamon introduced the legends of Excalibur (famous sword) French author Chretien de Troyes introduced Lancelot The English Knight Sir Thomas Malory codified the Arthur legends in Morte D’Arthur (1485)

7 The Arthurian Legend – The Past and Present
Arthurian Legend Today *Arthurian legends even last to today with pop culture taking on the Matter of Britain (e.g., Disney’s The Sword in the Stone, Broadway’s Camelot, First Knight, and in satire, Monty Python’s Holy Grail)

8 Arthurian Legend and Chivalry
Chivalric Ideal: The Knights of the Round Table were the most famous for this behavior in the Middle Ages. The classic definition of chivalry: men were brave, had honor, and showed gallantry towards women; Christian values in warfare (rules of engagement because “the enemy is my brother”); usually a good lover; courtesy to all people is key—being a gentleman in all situations is important; willing to sacrifice yourself for your lord and ladies (for the weak).

9 Arthurian Legend Courtly Love Courtly Love: the love a knight
has for a woman who is generally not his wife. It is a love from “afar” and it is usually very superficial (it is often explained, for example, with a knight who is struck by cupid’s arrow as he sees a beautiful maiden walking out of a castle.

10 Arthurian Legend Courtly Love
Courtly Love is also generally unattainable (at most, the knight may get a kiss, but that is all). Often the maiden is married to the King (e.g., Arthur & Guinevere and then Lancelot comes into the picture). Courtly Love creates a situation where the knight seeks to impress the lady from afar by doing brave deeds and being the perfect gentleman (showing great chivalry).

11 Sir Gawain and the Green Knight
Elements of the Legends and This Story Medieval romances (adventures) were frequently episodic as is the case with the Arthurian legends. The best of these stories are carefully constructed (not at random) and the details tend to “count.” SGGK is an example of this because it combines two distinct sort of adventures (the beheading contest and the events at Bercilak’s castle) . Gawain’s trouthe (his real character) is repeatedly tested in this as well as his loyalty: to Arthur and to the chivalric code.

12 Sir Gawain and the Green Knight
Elements of the Legends and This Story Christian themes are major themes in the story, because not only is the poet a Christian, but the knights are as well. It’s important to understand that the poet may not always be agreeing with the chivalric code. Strangely, however, there are pagan Celtic themes as well, especially in dealing with nature and “magical” elements. What is particularly important is the nature of Gawain’s “trouthe” or his “true character,” symbolized by the star on his shield or “Pentangle.” 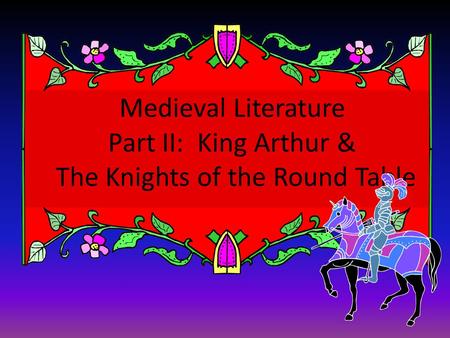 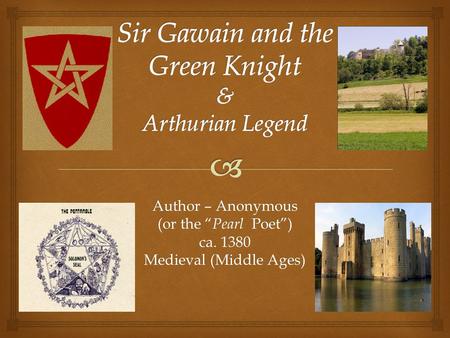