3 3 Rule 2 Use quotation marks to enclose each part of an interrupted quotation. Example  “Spiders,” explained Sean, “have eight legs.”

4 4 Rule 3 Use commas to set off a dialogue tag, such as he said, from the quotation itself. Place commas inside closing quotation marks. (See example from rule 2).

6 6 Rule 5 Place a question mark or exclamation point inside closing quotation marks if it is part of the quotation. Example  Cynthia asked, “Have you ever visited Florida?”

7 7 Rule 5 continued Place a question mark or exclamation point outside closing quotation marks if it is part of the entire sentence, but not part of the quotation. Example  Did Jerry say, “It’s raining cats and dogs”?

9 9 A question within a question?  Did Jerry ask, “Did you enjoy your trip to Florida?”

11 11 Rule 7 Use italics or underlining for titles of books, plays, movies, television series, magazines, newspapers, works of art, music albums, and long musical compositions. Also, use for the names of ships, airplanes, and spacecraft. Don’t italicize or underline the word the before the title of a magazine or newspaper.

13 13 1.For my book report said Samantha I will read Treasure Island, by Robert Louis Stevenson. 2.Then Jeff played Deep in the Heart of Texas on the piano. 3. What a hilarious story that was exclaimed Trixie. PLUG IN the punctuation

14 14 4. Doesn’t the magazine National Geographic have some fine nature photographs asked Dean. 5.I am writing in my journal Zelda told her brother.

16 16 8.Did Angel say I have never heard of that movie 9.Running deer said This is the place of the high waters 10. Rita called her essay The Perfect Sandwich 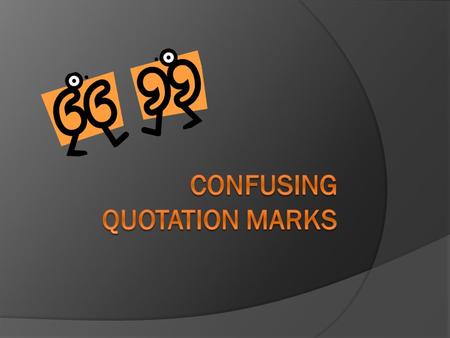 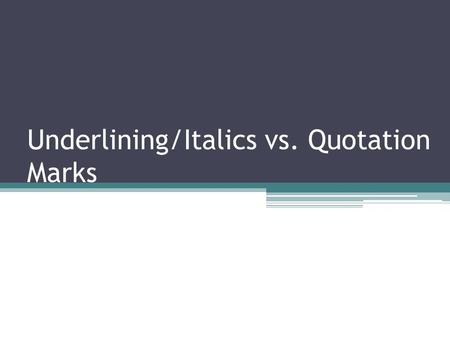 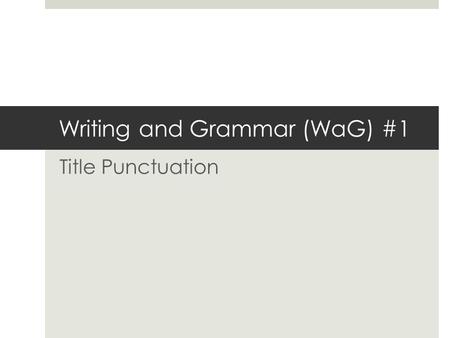 Writing and Grammar (WaG) #1 Title Punctuation. Please look carefully at the following samples to determine what you notice about title punctuation. What.