2 Genes and Proteins: RECALL: the sequences of nucleotides in DNA contain INFORMATION! This information is put to work through the production of PROTEINS.

3 What do proteins do for the body?
Proteins are diverse:  control chemical messages in cell;  direct the synthesis of carbo’s, lipids, and nucleotides;  enzymes;  give the cell structure and movement Goal of protein synthesis: MAKE A PROTEIN

5 RNA Like DNA= made of nucleotides copy of DNA segment
3 main types: mRNA, rRNA, tRNA 3 differences 1) sugar = ribose 2) single stranded 3) instead of the base thymine (T), RNA uses URACIL (U)

8 Role of RNA – an analogy Imagine what goes into a new car being built on an automobile assembly line: Engineers make the design and tell the workers how to make the cars; Workers follow the directions to build the cars; Suppliers bring parts to the assembly line so they can be installed in the car

11 DNA  RNA How does the information in DNA , which is found in the nucleus, get out to the ribosomes in the cytoplasm…it needs a “MESSENGER”!

12 Transcription Transcribe: to make a copy
Step #1 (of 2) of protein synthesis Transcribe: to make a copy transcribing DNA information (gene instructions) into mRNA mRNA can leave the nucleus  ribosomes in the cytoplasm special base sequences in DNA are recognized by RNA as “start” and “stop” signals “Start” sequence called PROMOTER region of DNA

13 Details of the Process 1. RNA polymerase attaches to DNA at the site where instructions for the needed protein begins & it separates the 2 DNA strands

16 Which strand was copied? A or B

17 3. when RNA polymerase reaches the end or "STOP" part of the genetic code for that protein, it releases 4. DNA re-zips  5. finished mRNA (message) leaves the nucleus and goes to a ribosome in the cytoplasm

21 TRANSLATION Making a protein (string of amino acids): translating from the language of nucleic acids into a polypeptide How does it go from mRNA (copy of DNA) to amino acids (building blocks of proteins)?  A group of 3 mRNA bases makes up a “codon” (think of as a “code word”)  each codon specifies a particular amino acid  there are “start” and “stop” codons

22 The Mechanism... 1) mRNA attaches onto the ribosome
 3 nucleotides of mRNA = codon 2nd kind of RNA= ribosomal RNA (rRNA)  makes up the majority of the ribosome

23 The Mechanism continued...
3rd kind of RNA= transfer RNA (tRNA)  carries amino acids to the ribosomes (amino acids join together)  3 nucleotides of tRNA that “match” or complement the mRNA = anticodon  there are 64 different tRNA molecules (more than 1 for each amino acid)  REDUNDANCY of the CODE!!

26 The Mechanism continued...
2) By matching the codon of mRNA to the anticodon of tRNA, the correct amino acid is put into place Next tRNA goes here!!!!

27 The Mechanism continued...
3) a peptide bond is formed between the 2 amino acids

28 The Mechanism continued...
4) protein chain continues to grow until a “stop” codon is reached on the mRNA  no tRNA exists for “stop” codons

37 Translation: All At Once

38 PROTEIN SYNTHESIS: All At Once 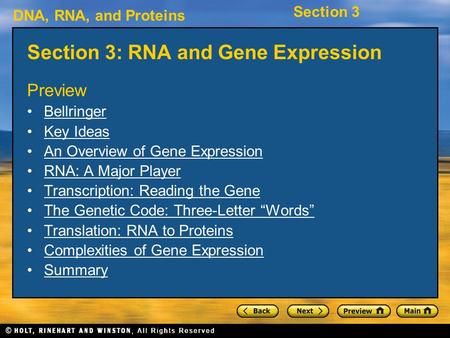