1 Chapter 1: Part 1 Matter & Measurements
Introduction: Matter, Measurement and Molecules Introduce people Me Erica David Phil David Lean need to find out what Phil is doing (credentials) Need to establish that we are A TEAM and that the Tutors are fantastic- so they don’t have problems when assessment arrives as a shock

2 Hubble Image Pillars of Creation in M16 Eagle Nebula A Star-forming region
Gas Pillars in the Eagle Nebula (M16): Pillars of Creation in a Star-Forming Region Every element heavier than Hydrogen was formed by fusion in stars, generally novas at the end of their life just before they explode, starting a new cycle of nebula and star formation. Like it said in Joni Mitchell’s song about Woodstock, “We are Stardust!”. So is everything else made of matter.

3 Chemistry The study of matter and the changes it undergoes. Figure 1.2

4 The Scientific Method A systematic approach to solving problems
Figure 1.9

5 Matter Anything that has mass and takes up space.

6 Matter Atoms are the building blocks of matter.
Each element is made of the same kind of atom. A compound is made of two or more different kinds of elements. Figure 1.1

7 Pure Substances, Elements and Compounds
Matter that has distinct properties and a composition that doesn’t vary from sample to sample, e.g. salt. Element A substance that cannot be decomposed into simpler substances, e.g. oxygen gas. Compound A substance that is composed of two or more different elements, so it contains two or more different kinds of atoms, e.g. water. The elemental composition of a pure compound is always the same and this is known as the Law of Constant Composition (or Law of Definite Proportions) Joseph Proust ( )

9 Solid Carbon Polymorphs (different crystal structures, 1 element)
Nanotube of soot carbon with open hollow fullerene structure. The network for hegagonal rings permits ready transfer of electrons. These are ultra light weight but conductive and have useful properties for new high tech materials as well as good old fashioned soot and particulate pollution. Rare well crystalline hexagonal graphite crystal from Kimmirut, Baffin Island, Nunavut. This is the most common and abundant form of carbon in nature. It makes a dry lubricant, a conductor of electricity and an industrial mineral for pigments, additives and pencil “leads” when mixed with clays. The diamond, upper right is a 3 carat “diamond shaped” specimen from the Ekati mine at Lac de Gras in the NWT. Diamond is cubic high density carbon derived from deep seated igneous rocks that have come up quickly from greater than 160 km depth in the Mantle. It is mostly used as an industrial abrasive, but a few stones are large, clear and flawless enough to be valuable as precious gems.

11 Mixtures A mixture is a combination of two or more substances in which each substance retains its own chemical identity and can be separated from each other. There are two types: - heterogeneous: a mixture which does not have the same composition, properties and appearance throughout: muesli, sand, rocks. - homogeneous: a mixture which is uniform throughout: solutions, air, smoke, alloys

12 Banded Malachite Cu2(CO3 )(OH)2 & Crystals Copper Sulphate Hydrate & Solution Cu(SO4) – 6H2O
Is mostly pure microcrystalline needles of green malachite, where the colour variation is due to crystal form not impurities or mixtures. The well crystallized specimen to the right shows the monoclinic crystal form of this cuprous carbonate hydroxide. This occurs naturally where acid rain alters copper sulfide ore deposits. It also makes the verdigris colour on old copper roofs and weathered bronze artifacts. Cuprous sulfate hexahydrate forms as a blue crystalline solid which dissolves readily to form blue acidic solutions. In the days of alchemy this was called blue vitriol. It is still used as an herbicide and farm poison to “kill ponds”. The solution here is the only true mixture, the others are pure compounds.

14 Properties and Changes of
Matter

19 Chemical Reactions (Chemical Change)
Figure 1.6 In the course of a chemical reaction, the reacting substances are converted to new substances.

20 Compounds Compounds can be broken down into more elemental particles; for example, during the electrolysis of water, the smaller particles hydrogen gas and oxygen gas are created.

21 2H2(g) + O2 (g)  H2O (g) + E Fuel Cells rely on putting energy in to separate Hydrogen and Oxygen in a closed container by the electrolysis of water. This is the “Charging” cycle. When the fuel cells run down, they follow the closed combustion reaction as written above, recombining the Hydrogen with the Oxygen to obtain water again plus the heat/energy that is converted to work in the engine.

23 Separation of Mixtures
1. Distillation Separates a homogeneous mixture on the basis of differences in boiling point. Figure 1.8

27 Metric System Prefixes convert the base units into units that are appropriate for the item being measured. Table 1.3

29 SI Units - Temperature The Kelvin is the SI unit of temperature.
It is based on the properties of gases. There are no negative Kelvin temperatures. K = C Figure 1.10

31 Derived SI Units Density
Density is a physical property of a substance and is determined through the following formula: density = mass volume  = m V or symbolically 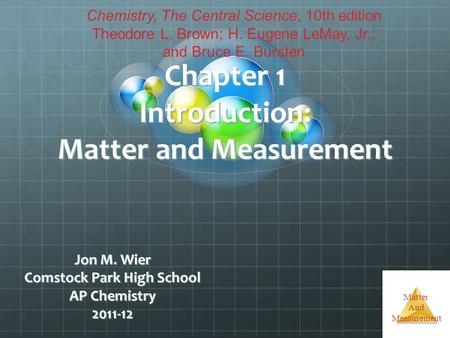 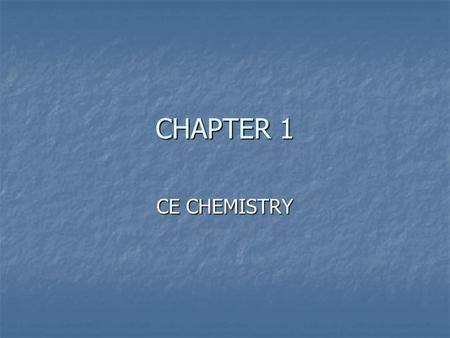 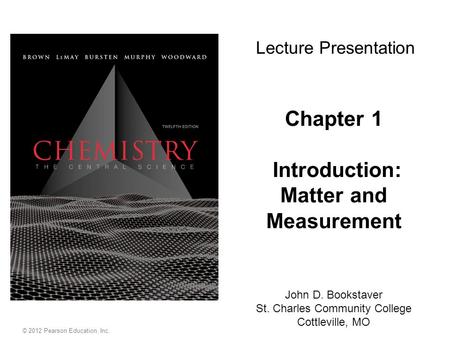 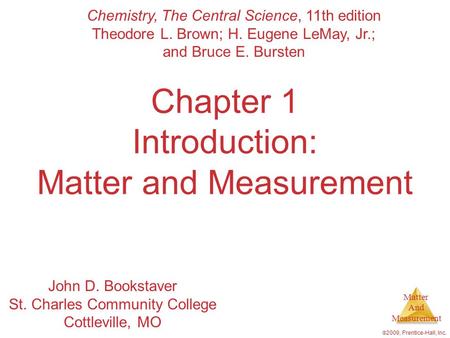 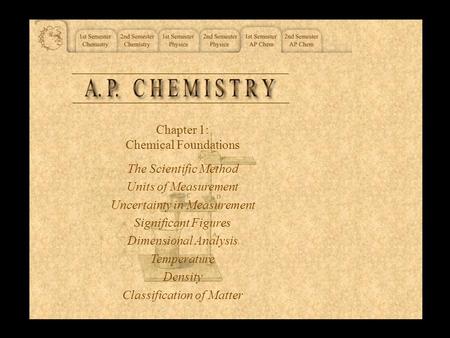 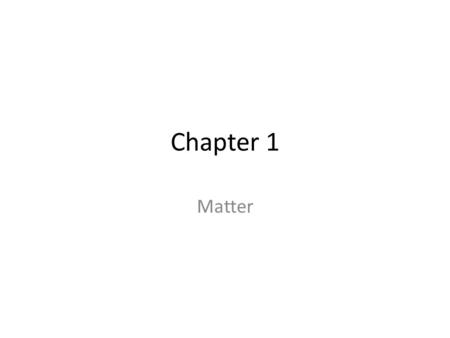 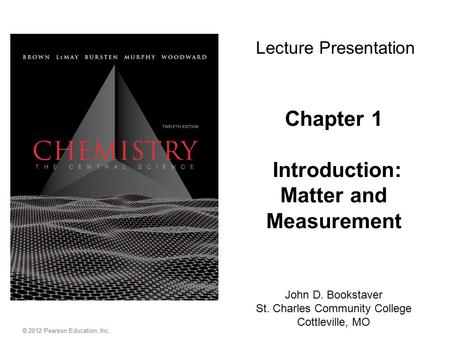 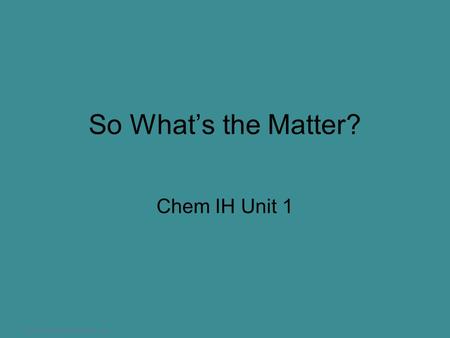 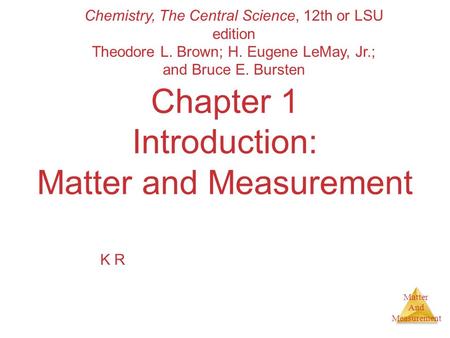 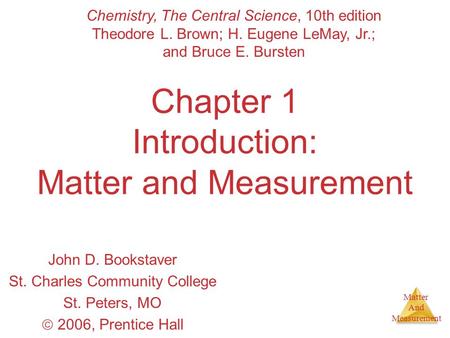 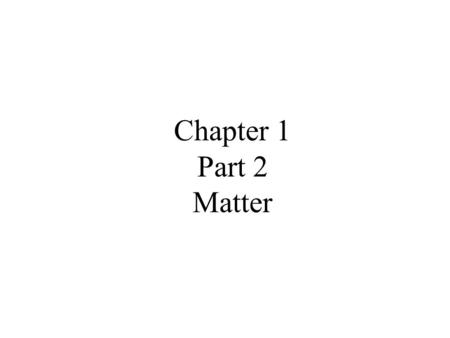