2 A phase is a homogeneous part of the system in contact with other parts of the system but separated from them by a well-defined boundary. 2 Phases Solid phase - ice Liquid phase - water

4 Types of Intermolecular Forces 1. Hydrogen Bond (strongest) The hydrogen bond is a special dipole-dipole interaction between the hydrogen atom in a polar N-H, O-H, or F-H bond and an electronegative O, N, or F atom. IT IS NOT A BOND. A H … B A H … A or A & B are N, O, or F

13 Properties of Liquids Surface tension is the amount of energy required to stretch or increase the surface of a liquid by a unit area. Strong intermolecular forces High surface tension

15 Properties of Liquids Viscosity is a measure of a fluid’s resistance to flow. Strong intermolecular forces High viscosity

23 Types of Crystals Metallic Crystals – Typically weaker than covalent, but can be in the low end of covalent Lattice points occupied by metal atoms Held together by metallic bonds Soft to hard, low to high melting point Good conductors of heat and electricity Cross Section of a Metallic Crystal nucleus & inner shell e - mobile “sea” of e -

24 An amorphous solid does not possess a well-defined arrangement and long-range molecular order. A glass is an optically transparent fusion product of inorganic materials that has cooled to a rigid state without crystallizing Crystalline quartz (SiO 2 ) Non-crystalline quartz glass

28 Molar heat of fusion (  H fus ) is the energy required to melt 1 mole of a solid substance.

31 A phase diagram summarizes the conditions at which a substance exists as a solid, liquid, or gas. The triple point is where all 3 phases meet. Phase Diagram of Water

33 Must be able to find: Can you find… The Triple Point? Critical pressure? Critical temperature? Where fusion occurs? Where vaporization occurs? Melting point (at 1 atm)? Boiling point (at 6 atm)? Carbon Dioxide 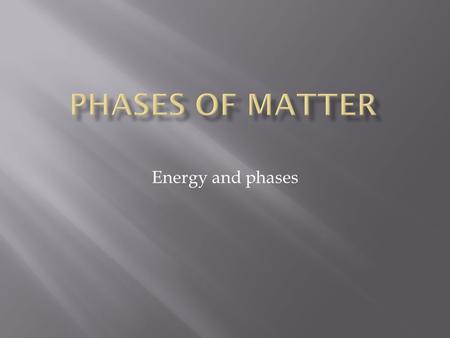 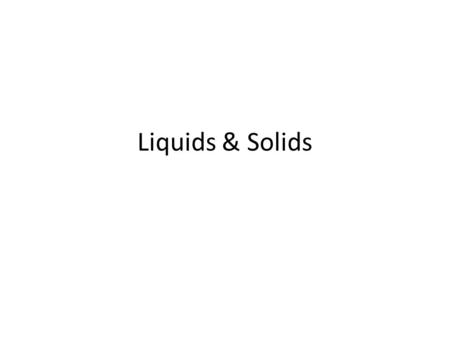