6 June 2015 Sunderland City Council : Schools Forum Schools Forum Powers & Responsibilities Continued funding at existing levels for prescribed historic centrally retained commitments where the effect of delegating this funding would be destabilising. Funding for the local authority in order to meet prescribed statutory duties placed upon it. Agree funding for central early years expenditure, which may include funding for checking eligibility of pupils for an early years place, the early years pupil premium and/or free school meals. Authorising a reduction in the school budget in order to fund a deficit arising in central expenditure that is to be carried forward from a previous funding period

9 June 2015 Sunderland City Council : Schools Forum Annual Consultation with Schools Forum Local authorities will need to discuss with the Schools Forum any proposals that they intend to put to the Secretary of State to: Vary the Minimum Funding Guarantee Use Exceptional Factors in the Formula Vary pupil numbers used to calculate budget shares Allow additional categories of or spending on central budget Amend the sparsity factor is applicable Vary the lump sum for amalgamating schools if applicable Vary the protection for special schools and special academies

10 June 2015 Sunderland City Council : Schools Forum School Forum Members Each Schools Forum Member: will need the skills and competencies to manage Forum business (as detailed in Table 2) have the ability to take a strategic view across the whole education estate whilst acting as representative of the group that has elected them. should be easily contactable and pro-active in raising the profile of issues and communicate decisions, and the reasons behind them, effectively

11 June 2015 Sunderland City Council : Schools Forum Effective School Forums Below are the key characteristics of an effective Schools Forum: Partnership: shared understanding of the priorities, issues and concern of schools, academies and LA. Effective Support by LA in an efficient and professional manner Open, honest and objective advice from LA Responsiveness to requests from school forum members by LA Strategic view of the whole of the educational community Challenge and scrutiny of proposals

12 June 2015 Sunderland City Council : Schools Forum Accounting & Reporting Requirements The following are the reporting requirements set out in the grant conditions for the Dedicated Schools Grant (DSG): Chief Finance Officer (CFO) required to submit a return to indicate that the DSG is being spent on the Schools Budget. An Authority’s Statement of Accounts will need to include a note confirming the deployment of DSG in support of the Schools Budget. Any underspends / overspends must be shown by area to demonstrate compliance with CEL Accounts & Audit Regulations 2006. Any underspend / overspends require approval of Schools Forum Confirmation by CFO of the published outturn via Section 251 return

13 June 2015 Sunderland City Council : Schools Forum Work Plan & Frequency of Meetings The proposed work plan is included in your Induction Pack: Frequency of meetings – currently 2 per term to allow for all business of the forum to be considered Agenda items follow funding and budget cycle All meeting take place currently on Thursday mornings with an early 8:30 start Agenda items not included in the work plan for the wider schools and academies agenda can be submitted to the Clerk for inclusion in the next meeting. Agenda items should be submitted in advance to ensure there is time to prepare for the item before the meeting

16 June 2015 Sunderland City Council : Schools Forum Key Issues – 2016/17 We will not know what the key issues are for education until the Chancellor’s Budget Announcements on 22 nd June 2015 and in his speech in early December 2015 Manifesto pledges with regard to education were:  Protect school funding per pupil?  Create at least a further 500 free schools in England by 2020  Zero tolerance for failure – immediate support to turn around failing or coasting schools  30 hours free childcare for working parents of 3&4-year-olds Early years – how will the additional 15 hours be funded, is the rate funded to providers currently correct and is the extension to 30 hours affordable for the providers

22 June 2015 Sunderland City Council : Schools Forum SBFF – Formula Factors Basic Entitlement Minimum amount per pupil £2k primary and £3k secondary Deprivation Based on pupils entitled to a FSM and those pupils with an IDACI score of more than 0.20 allocated in 6 funding bands Prior Attainment Based on low level of attainment on Early Years Foundation Stage Profile for primary and KS2 results for secondary pupils Mobility Applies only when the number of mobile pupils exceed 10% of NOR

23 June 2015 Sunderland City Council : Schools Forum SBFF Formula Factors Looked After Children (LAC) Applies to any child on roll who has been in care for at least one day during a specified period EAL Based on number of pupils on roll with English as an additional language (EAL) for a maximum of three years Lump Sum Maximum lump sum allowed is £175k and can be a single rate or two separate rates for primary and secondary schools and academies Business Rates Based on estimated actual costs adjusted retrospectively each year PFI Factor Specific lump sum contribution towards Private Finance Initiative costs

32 June 2015 Sunderland City Council : Schools Forum Early Years Block Provides funding to support the 2, 3 & 4 year old entitlement to 15 hours free early years education: Funding for eligible 2 year olds is based on a rate per pupil per hour of £4.84 Universal 3 & 4 year old funding is based on a local formula which allocates funding based on participation Funding to support commissioned places for vulnerable children from birth to 2 years old The Early Years Block within the DSG is subject to in year adjustment for pupil numbers and therefore the formula needs to be responsive to changes in participation

33 June 2015 Sunderland City Council : Schools Forum Early Years Single Funding Formula Base Rates 5 separate rates of which 1-4 apply based on staff qualifications and a single childminder rate Deprivation Based on IDACI scores using individual child level postcodes Flexibility Additional funding for children accessing their 15 hours on a flexible basis Lump Sums Allocated to nursery schools only to recognise unavoidable differential in costs of provision Sufficiency Funding provided only where there is only one provider required to meet local need (rural setting) SEN Additional funds to support SEN based on Early Years Action Plus

35 June 2015 Sunderland City Council : Schools Forum Pupil Premium Provides additional funding for disadvantaged pupils in mainstream schools and academies: Primary pupils eligible for a FSM in the last 6 years are funded at an additional £1,320 Secondary FSM6 pupils are funded at £935 All service pupils attract £300 Looked After Children, children who have been adopted or subject to special guardianship arrangements may attract up to £1,400 which is allocated separately based on individual pupil’s education plans Funding allocated termly in addition and separate to the DSG

36 June 2015 Sunderland City Council : Schools Forum Early Years Pupil Premium (April 2015) Provides additional funding for disadvantaged pupils in early years settings: Funding allocated for 3 & 4 year old children only Based on specific criteria (similar to FSM) and LAC children All pupils attract £0.53 per child per hour for a maximum of 570 hours Funding allocated as part of DSG and distributed as an extension to early years funding system

37 June 2015 Sunderland City Council : Schools Forum Education Services Grant Allocated to local authorities and academies on a simple per- pupil basis according to the number of pupils for whom they are responsible Local Authority receives £15 per pupil for statutory functions relating to all pupils Local Authority receives £87 per pupil for additional responsibilities relating to Maintained Schools Academies receive £87 per pupil and additional transitional protection dependent on the current amount of ESG per pupil received Local Authority ESG funding is reduced as schools become academies 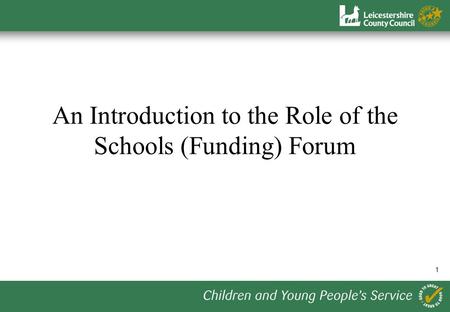