1 CHAPTER 13 GENETIC ENGINEERING
13-1 Changing the Living World A. Selective Breeding - allowing only animals with the desired characteristics to produce the next generation - used to pass desired traits onto the next generation - horses, farm animals, cats, dogs and most crop plants have been produced this way

3 Examples: 1. hybridization - crossing unlike individuals to bring together the best of both organisms - produces hybrids which are hardier than either of the parents - used first by Luther Burbank who produced new lines of plants in order to increase food production

4 2. inbreeding - the continued breeding of individuals with similar characteristics in order to maintain the desired characteristics of a line of organisms - seen in many dog breeds; ensures that the characteristic that make each breed unique will be preserved - risky because inbreeding of genetically similar animals can lead to genetic defects including blindness and joint deformities

7 B. Increasing Variation - breeders can increase genetic variation in a population by bringing about mutations, which are the source of genetic variability - mutations are inheritable changes in DNA that occur spontaneously - breeders increase mutations by using radiation and chemicals

8 Examples: 1. Producing new kinds of bacteria - bacterial size enables large numbers of organisms to be treated with radiation or chemicals at the same time thus increasing the chance of producing a successful mutant - this technique has produced useful bacterial strains such as bacteria that digest oil, and are used in the cleanup of oil spills

9 2. Producing new kinds of plants - drugs have been used to prevent chromosomal separation during meiosis resulting in polyploidy (double or triple to the number of chromosomes) - polyploidy is fatal in animals but in plants producers new species that are large and stronger than normal Ex. bananas and citrus fruits

10 13-2 Manipulating DNA - scientists can use their knowledge of DNA structure and its chemical properties to study and change DNA molecules - different techniques are used to remove DNA from cells, cut it into small pieces, identify the sequence of bases in the DNA piece, and make unlimited copies

11 A. The tools of Molecular Biology In genetic engineering, changes are made in the DNA code 1. DNA extraction - the cells are opened chemically and the DNA is separated from other parts of the cell

13 2. Cutting DNA - restriction enzymes are used to cut the large strands of DNA into smaller fragments

14 3. Separating DNA - DNA fragments are separated using gel electrophoresis - Identifies genomes of different organisms - Can locate one gene from millions of others

17 2. Cutting and Pasting - method used to change DNA sequences - synthetic sequences made from a DNA synthesizer can be added to natural ones or a gene from one organism can be attached to the DNA of another organism - these DNA molecules are called “recombinant DNA” because they are formed by combining DNA from different sources

19 13-3 Cell Transformation During transformation, a cell takes in DNA from outside the cell and this outside DNA becomes a part of the cell’s DNA A. Transforming bacteria (See Fig 13-9) - foreign DNA is joined to a small, circular DNA molecule called a plasmid found in many bacteria - plasmids are useful for DNA transfer - plasmids containing foreign DNA that find their way into bacterial cells are guaranteed to be replicated - also, plasmids contain a genetic marker so it is easy to identify bacteria that carry the plasmid with the foreign bacteria from those that don’t

22 B. Transforming plant cells (Fig 13-10) - in nature, a bacterium inserts a small DNA plasmid that produces tumors into a plant’s cells - researchers can inactivate the tumor-producing gene and insert foreign DNA into the plasmid - the recombinant plasmid can be used to infect plant cells

24 C. Transforming animal cells (See Fig 13-11) - animal cells are transformed in some of the same ways as plant cells - the recombinant DNA can be used to replace a gene in an animal’s genome - a mutated gene that causes a disorder can be replaced by a normal gene

26 13-4 Applications of Genetic Engineering
- this technology makes it possible to transfer DNA sequences, including whole genes, from on organism to another A. Transgenic organisms - organisms that contain genes from other organisms - these transformed cells can be used to grow new organisms

27 1. transgenic microorganisms - produce important substances useful for health and industry - transformed bacteria now produce proteins such as insulin, growth hormone, and clotting factor cheaply and in large quantities - in the future, anticancer substances could be produced as well as the raw materials for plastics and synthetic fibers

28 2. transgenic animals - used to study genes and improve the food supply - mice are used to study the effects of disease on the human immune system - transgenic livestock have extra copies of genes that produce human growth hormone and they grow faster and produce meat with less fat - transgenic chickens are being studied that will be resistant to bacterial infections that cause food poisoning - in the future, animals may provide us with large amounts of our own proteins

31 3. transgenic plants - an important part of our food supply - most of soybean and corn grown in the US is transgenic or genetically modified - many plants contain genes that produce a natural insecticide - other plants have genes that resist weed-killing chemicals, so farmers can control weeds while not harming the crop - they may soon produce antibodies that can be used to fight disease, plastics, and foods resistant to rot and spoilage - an important new development is a rice plant that adds Vitamin A to the rice 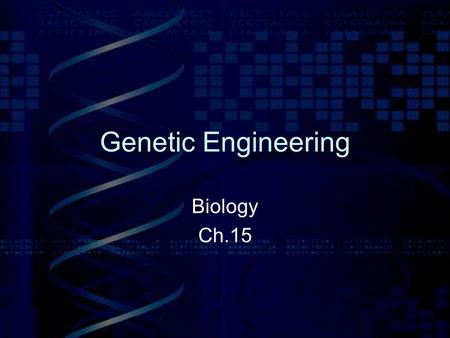