2 6.1 Earthquakes and Plate Boundaries
When rocks can no longer change shape—the fault breaks and slips, causing earthquakes. The rupture and sudden movement of rocks along a fault. Majority of earthquakes occur in Earth’s crust. Part of the energy released from earthquakes spreads as complex waves. 5

3 6.1 Earthquakes and Plate Boundaries
Focus & Epicenter The focus is the location on the fault where an earthquake begins. The closer the focus is to the surface, the stronger the shaking will be. The point on Earth’s surface directly above the focus is the epicenter. 4

8 6.2 Earthquakes and Seismic Waves
Waves of energy that are produced at the focus of an earthquake. Waves move outward from the focus in all directions. 3 main types of seismic waves. 4

10 2. Secondary Waves (S-waves)
Particles vibrate perpendicular to wave Slower than P-waves Detected after the p-wave Travels through solids only 2

13 Measuring Earthquakes
Scientists determine size of earthquakes by measuring how much the rock slips along the fault. They also analyze the heights of the seismic waves, which indicate how much energy is released by an earthquake. 4

16 6.3 Measuring Earthquakes
Reading a Seismogram Wave heights indicate the amount of ground motion for each type of wave. Difference between the arrival times of P-waves and S-waves determines the distance of the seismograph from the epicenter. (p.260) 1

23 Measuring Earthquake Size
Magnitude measures the amount of energy released by an earthquake. Magnitude scale is based on record of height of ground motion. Most values range from 0–9. 4

26 6.3 Measuring Earthquakes
Earthquake Intensity Intensity refers to the amount of shaking and damage caused. Intensity varies depending on: Size of earthquake Distance from epicenter Type of ground surface Construction of building Mercalli Scale measures intensity Usually, the maximum intensity is found near the epicenter. (p. 264) 1 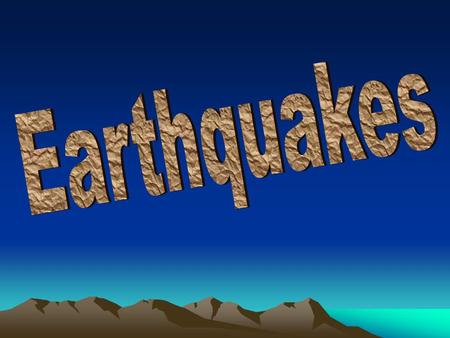