6 Planets There are only eight planets in the solar system. At point we had a total of nine but the planet Pluto became a white dwarf planet. Each planet is unique in it’s own kind of way

7 Mercury Mercury is the first planet in our solar system and also the closest planet to the sun. It’s the second hottest planet in the in the solar system right after Venus. It slowly rotates all the way around the sun, which is why it is so hot because of the sun’s rays.

10 Mars Many people call mars the “Red Planet”. It is called the red planet because in the sky at night it looks like a red star. It’s the fourth planet in the solar system, right between Jupiter and earth. What’s so unique about mars is that frozen water was discovered on it.

11 Jupiter Jupiter is the fifth planet from the sun. And the largest out of all the planets. Jupiter is known as the “Gas Giant” There are very faint rings round Jupiter that most people can not see. It also has a strong magnetic force that is even stronger than earth’s

12 Saturn Saturn is the sixth planet from the Sun. And the second largest next to Jupiter. Saturn is the only planet that weighs less than water. If Saturn could fit in a bath tub full of water it could float!!! Saturn possesses highly visible rings composed mainly of snow and ice.

13 Uranus Uranus is the seventh planet. Being the third largest planet Uranus is also know as a “Gas Giant”, like Jupiter. An interesting fact about Uranus is that it is flipped on it’s side. Each season on Uranus last 21 years at the most. It is also the coldest planet,even colder than Neptune,which is the last planet in our solar

14 Neptune Neptune is the eight and final planet in our solar system. It is the double the size of earth. A single day on Neptune can last about sixteen hours. Just like Saturn Neptune has rings around it but it’s rings are hard to see. It’s also considered to be a “Gas Giant”

15 Pluto the Lost planet Pluto used to be the ninth planet in our solar system. Now it is the lost planet. Over time Pluto became a white dwarf planet. Pluto was the smallest planet in the solar system.

16 The Sun The Sun is the head of are solar system. Everything revolves around it. It is not a planet but a giant star. The closest star to us is the sun. It is said that the sun is already half way through it’s life time. Without the sun there wouldn’t be any life on earth.

17 Comets Comets are small bodies of ice a dust that travel around the sun. When close enough to the sun they give of a bright light that you can see in the sky. The most famous comet is Halley's Comet. It can be seen from earth about every 75 years.

18 Asteroids Asteroids and planets are very similar in the way they are made. A very well known thing about asteroids is the asteroid belt that is settled between Mars and Jupiter. Scientist believe that asteroids are what killed the dinosaurs a long time ago. Asteroids are made up of many different things. Most asteroids are covered in dust.

19 Stars Stars are giant balls of gas that give of light. No one really knows how many stars there are in space. On any giving night you can see around 3,ooo stars without a telescope. In our galaxy there are over 100 billion stars alone. They come in many different sizes. Some could be smaller than earth or larger than the sun.

20 The Moon Every planet has it’s own moon except for two. Most have more than one. Earth only has one moon that orbits around it. Mercury has no moons at all. Mars has two moons Phobos and Deimos Venus does not have any moons at all either. Jupiter has sixty seven moons Saturn has sixty moons Uranus has twenty seven moons Neptune has thirteen moons

Download ppt "Solar System Jasmin Fletcher Grade Level 5. The solar system includes the sun and all celestial bodies that orbit the sun. Each planet in the solar system." 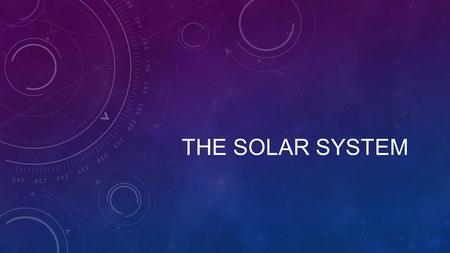 THE SOLAR SYSTEM. WHAT IS A PLANET? “ According to Webster’s dictionary a planet is a large, round object in space (such as Earth) that travels around.