2 A Historic Election History was made on November 4, 2008, when Barack Obama was elected the first African-American President of the United States.

3 A Historic Election Other African Americans who made ground breaking first in our government helped pave the way for Obama. In 1968, Shirley Chisholm became the first black woman elected to the U.S. Congress. Four years later, she sought to become President.

4 A Historic Election Thurgood Marshall was the first African American to serve on the U.S. Supreme Court ( ).

5 A Historic Election Colin Powell was our country’s first African-American Secretary of State ( ).

7 Who is Barack Obama? His parents met while they were in college.
His father, Barack Obama Sr., was from Kenya. His mother, Ann Dunham, was from Kansas.

8 Who is Barack Obama? Obama spent the first years of his life in Hawaii.

9 Who is Barack Obama? When he was 6, he moved with his mother and new stepfather to Indonesia.

10 Back in Hawaii His mother sent him back to Hawaii when he was 10 years old. He lived with his grandparents. He was on the basketball team. He graduated from high school in 1979 and went to college in California.

11 New York and Chicago Obama graduated form Columbia University in New York. He then moved to Chicago to work as a community organizer, helping poor people.

12 Making History at Harvard
In 1988, he enrolled at Harvard Law School to become a lawyer. There, Obama was elected the first African-American president of the Harvard Law Review. Obama wrote a book about his life. Dreams from My Father: A Story of Race and Inheritance, was published in 1995.

13 Into Politics Obama moved back to Chicago to work as a lawyer.
He also taught law at the University of Chicago Law School. In 1992, he married another Harvard graduate and lawyer, Michelle Robinson.

17 FUN FACTS about Barack Obama
He is the first person born in Hawaii to be elected President.

18 FUN FACTS about Barack Obama
His mother’s full name was Stanley Ann Dunham. Her parents named her “Stanley” because her father wanted a boy

19 FUN FACTS about Barack Obama
In the first grade, he wrote a report for his teacher titled, “I Want to Become President”.

20 FUN FACTS about Barack Obama
On their first date, he and his wife, Michelle, went out for ice cream cones.

21 FUN FACTS about Barack Obama
He likes to play basketball and cards.

23 The First Family Barack Obama, his wife Michelle and daughters Malia and Sasha. 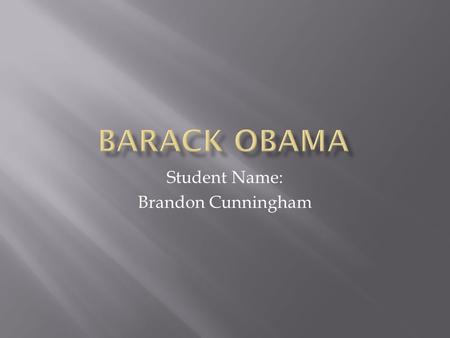 Student Name: Brandon Cunningham.  The first African American to be elected president of the United States in 2008. 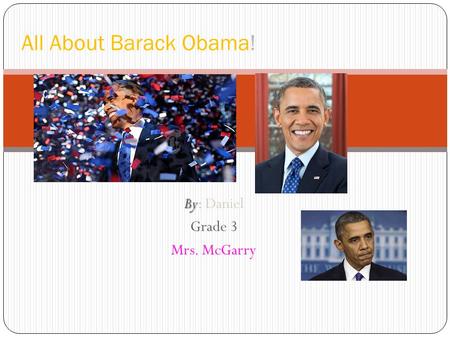 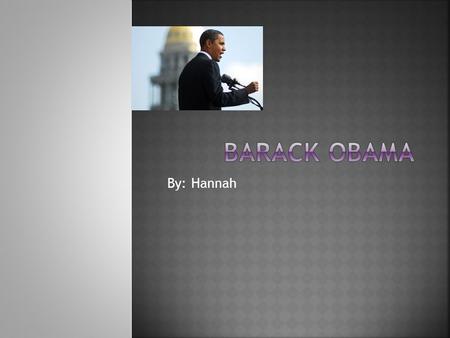