3 Introduction Extensive inflammatory damage to glomeruli can cause a fall in GFR and eventually produce uremic symptoms with salt and water retention, leading to edema and hypertension.

7 Poststreptococcal Glomerulonephritis
The classic presentation is an acute nephritic picture with hematuria, pyuria, red blood cell casts, edema, hypertension, and oliguric renal failure, which may be severe enough to appear as RPGN. Systemic symptoms of headache, malaise, anorexia, and flank pain (due to swelling of the renal capsule) are reported in as many as 50% of cases.

9 Poststreptococcal Glomerulonephritis
Treatment is supportive, with control of hypertension, edema, and dialysis as needed. Antibiotic treatment for streptococcal infection should be given to all patients and their cohabitants. There is no role for immunosuppressive therapy, even in the setting of crescents.

10 Poststreptococcal Glomerulonephritis
Overall, the prognosis is good, with permanent renal failure being very uncommon (1–3%), and even less so in children. Complete resolution of the hematuria and proteinuria in children occurs within 3–6 weeks of the onset of nephritis.

14 Subacute Bacterial Endocarditis
Endocarditis-associated glomerulonephritis is typically a complication of subacute bacterial endocarditis. Particularly in patients who: Remain untreated for an extended period of time Have negative blood cultures Have right-sided endocarditis (IVDU)

15 Subacute Bacterial Endocarditis
Grossly, the kidneys in subacute bacterial endocarditis have subcapsular hemorrhages with a "flea-bitten" appearance. Microscopy on renal biopsy reveals a focal proliferation around foci of necrosis associated with abundant mesangial, subendothelial, and subepithelial immune deposits of IgG, IgM, and C3.

16 Subacute Bacterial Endocarditis
The pathogenesis hinges on the renal deposition of circulating immune complexes in the kidney with complement activation.

18 Subacute Bacterial Endocarditis
Primary treatment is eradication of the infection with 4–6 weeks of antibiotics, and if accomplished expeditiously, the prognosis for renal recovery is good.

21 Lupus Nephritis Lupus nephritis is a common and serious complication of systemic lupus erythematosus (SLE) and most severe in African-American female adolescents.

22 Lupus Nephritis Thirty to fifty percent of patients will have clinical manifestations of renal disease at the time of diagnosis. Sixty percent of adults and eighty percent of children develop renal abnormalities at some point in the course of their disease.

24 Lupus Nephritis The most common clinical sign of renal disease is proteinuria, but hematuria, hypertension, varying degrees of renal failure, and an active urine sediment with red blood cell casts can all be present.

25 Lupus Nephritis Hypocomplementemia is common in patients with acute lupus nephritis (70–90%) and declining complement levels may herald a flare. Renal biopsy, however, is the only reliable method of identifying the morphologic variants of lupus nephritis.

26 Lupus Nephritis Patients with crescents on biopsy may have a rapidly progressive decline in renal function. Without treatment, this aggressive lesion has the worst renal prognosis.

27 Lupus Nephritis Treatment must combine high-dose steroids with either cyclophosphamide or mycophenolate mofetil. Current evidence suggests that inducing a remission with administration of steroids and either cyclophosphamide or mycophenolate mofetil for 2–6 months, followed by maintenance therapy with lower doses of the same

30 Antiglomerular Basement Membrane Disease
When they present with lung hemorrhage and glomerulonephritis, they have a pulmonary-renal syndrome called Goodpasture's syndrome.

32 Antiglomerular Basement Membrane Disease
The performance of an urgent kidney biopsy is important in suspected cases of Goodpasture's syndrome to confirm the diagnosis and assess prognosis. Renal biopsies typically show focal or segmental necrosis that later, with aggressive destruction of the capillaries by cellular proliferation, leads to crescent formation in Bowman's space

33 Antiglomerular Basement Membrane Disease
The presence of anti-GBM antibodies and complement is recognized on biopsy by linear immunofluorescent staining for IgG (rarely IgA).

35 Antiglomerular Basement Membrane Disease
Patients with advanced renal failure who present with hemoptysis should still be treated for their lung hemorrhage, as it responds to plasmapheresis and can be lifesaving. Treated patients with less severe disease typically respond to 8–10 treatments of plasmapheresis accompanied by oral prednisone and cyclophosphamide in the first 2 weeks.

39 IgA Nephropathy IgA nephropathy is one of the most common forms of glomerulonephritis worldwide. There is a male preponderance, a peak incidence in the second and third decades of life, and rare familial clustering.

41 IgA Nephropathy The two most common presentations of IgA nephropathy are recurrent episodes of macroscopic hematuria during or immediately following an upper respiratory infection in children (Henoch-Schönlein purpura) or asymptomatic microscopic hematuria most often seen in adults.

42 IgA Nephropathy Rarely, patients can present with acute renal failure and a rapidly progressive clinical picture. Risk factors for the loss of renal function include the presence of hypertension or proteinuria, the absence of episodes of macroscopic hematuria, male, older age of onset, and more severe changes on renal biopsy.

43 IgA Nephropathy Studies of patients with IgA nephropathy support the use of angiotensin-converting enzyme (ACE) inhibitors in patients with proteinuria or declining renal function.

47 ANCA Small Vessel Vasculitis
Wegener's granulomatosis (PR3) Microscopic polyangiitis (MPO) Churg-Strauss syndrome (MPO) Belong to this group because they are ANCA-positive and have a pauci-immune glomerulonephritis with few immune complexes in small vessels and glomerular capillaries.

48 ANCA Small Vessel Vasculitis
Induction therapy usually includes some combination of plasmapheresis, methylprednisolone, and cyclophosphamide. The steroids are tapered soon after acute inflammation subsides, and patients are maintained on cyclophosphamide or azathioprine for up to a year to minimize the risk of relapse.

53 Membranoproliferative Glomerulonephritis
Type I MPGN, the most proliferative of the three types. Tram-tracking - mesangial proliferation with lobular segmentation on renal biopsy and mesangial interposition between the capillary basement membrane and endothelial cells.

54 Membranoproliferative Glomerulonephritis
Type I MPGN is secondary to glomerular deposition of circulating immune complexes Patients with MPGN present with: Proteinuria Hematuria Pyuria (30%) Systemic symptoms of fatigue and malaise that are most common in children with Type I disease.

55 Membranoproliferative Glomerulonephritis
In the presence of proteinuria, treatment with inhibitors of the renin-angiotensin system is prudent. There is some evidence supporting the efficacy of treatment of primary MPGN with steroids, particularly in children. In secondary MPGN, treating the associated infection, autoimmune disease, or neoplasms is of demonstrated benefit.

58 Mesangioproliferative Glomerulonephritis
Clinically, it can present with varying degrees of proteinuria and, commonly, hematuria.

60 Mesangioproliferative Glomerulonephritis
There is little agreement on treatment, but some clinical reports suggest benefit from use of: Inhibitors of the renin-angiotensin system Steroid therapy Cytotoxic agents 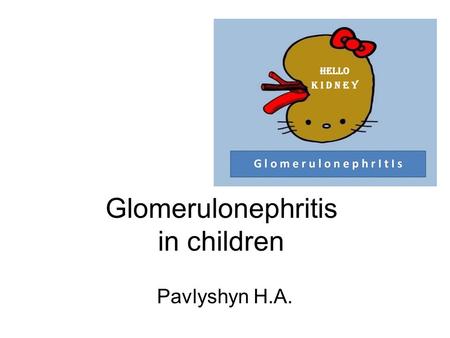 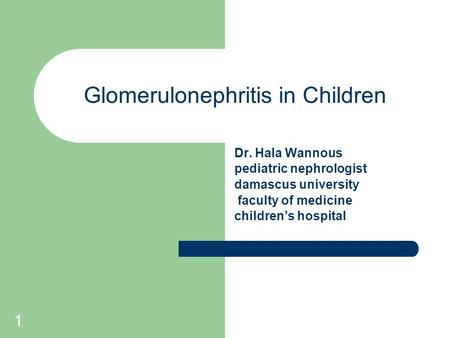 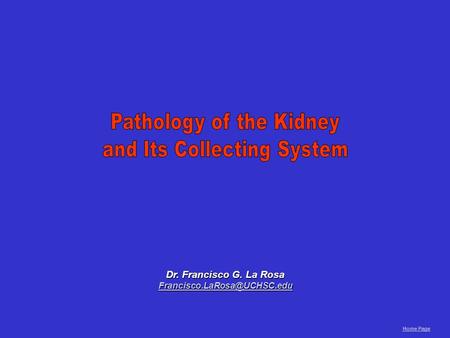 Pathology of the Kidney and Its Collecting System 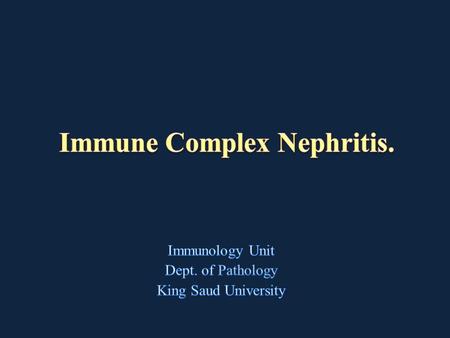 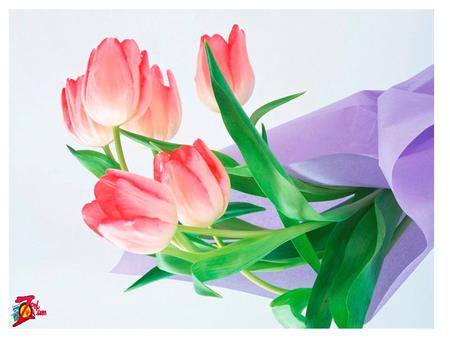 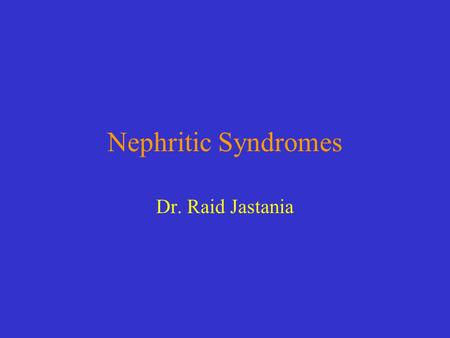 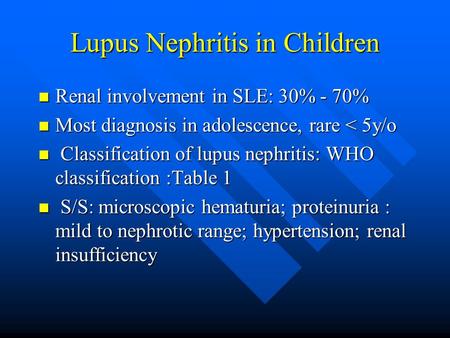 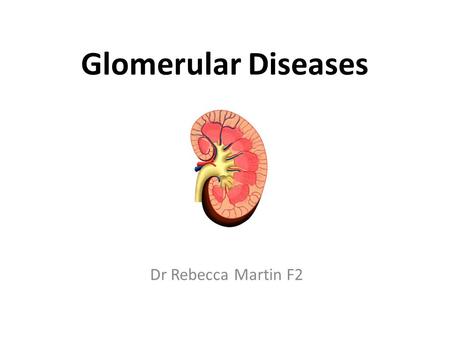 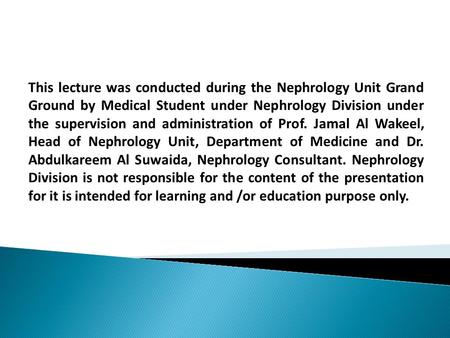 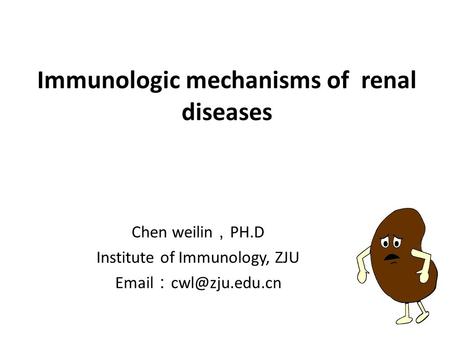 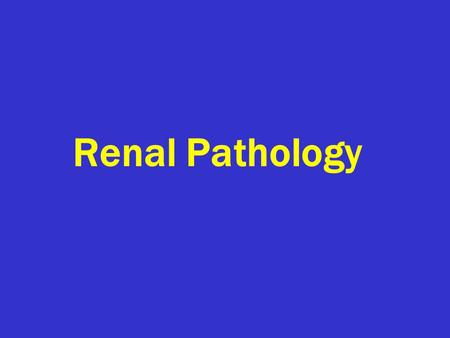 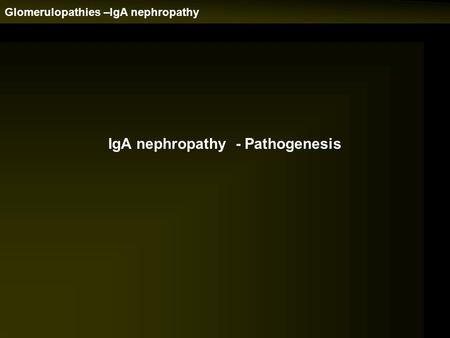 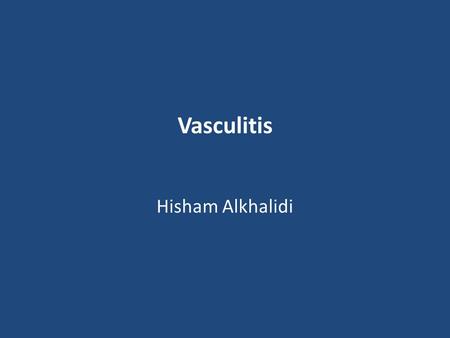 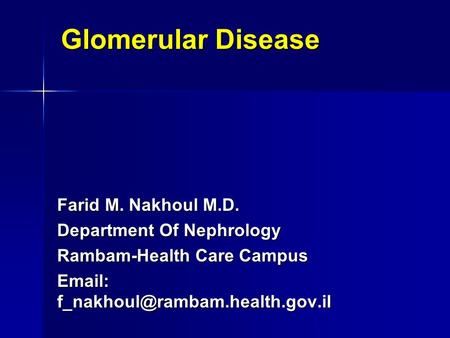 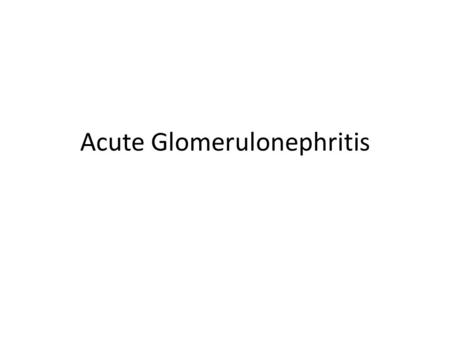 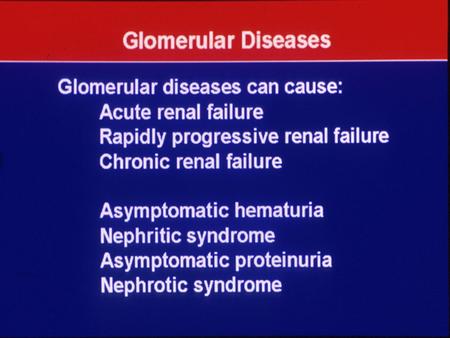 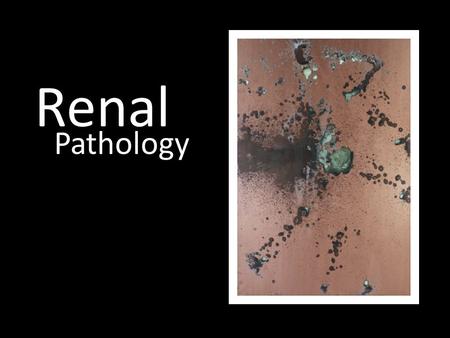 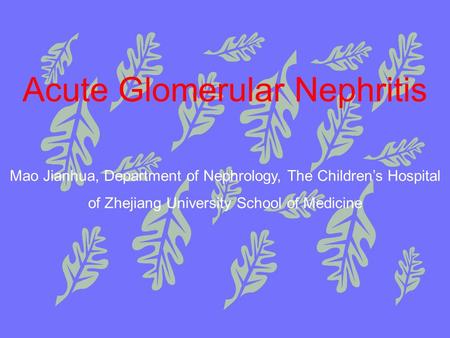 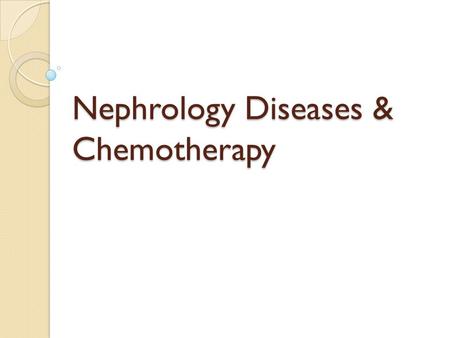 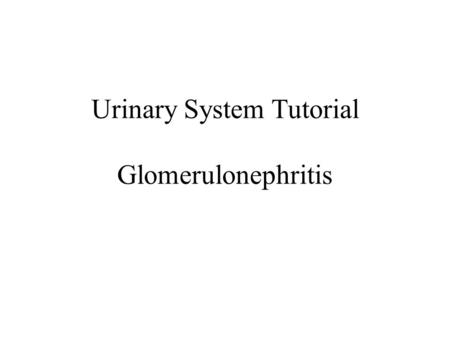