3 Combinational Circuits
A combinational circuit has one or more digital inputs one or more digital outputs a functional specification that details the value of each output for every possible combination of valid input values a timing specification consisting (at minimum) of an upper bound tPD on the required time for the device to compute the specified output values from an arbitrary set of stable, valid input values

4 Functional Specifications
There are many ways of specifying the function of a combinational device, for example: Concise alternatives: Boolean function Truth table Schematic

5 Combinational Circuits
Combinational logic circuits has no memory! Outputs are only function of current input combination Nothing is known about past events Repeating a sequence of inputs always gives the same output sequence Sequential logic circuits (covered later) does have memory Repeating a sequence of inputs can result in an entirely different output sequence

6 Combinational Logic Example
Circuit controls the level of fluid in a tank inputs are: HI - 1 if fluid level is too high, 0 otherwise LO - 1 if fluid level is too low, 0 otherwise outputs are: Pump - 1 to pump fluid into tank, 0 for pump off Drain - 1 to open tank drain, 0 for drain closed input to output relationship is described by a truth table

8 Terms and Definitions Logic Expression (Boolean/Switching function) - a mathematical formula consisting of logical operators and variables f(x,y,z) = (x + y’).z + x’ Logic Operator - a function that gives a well defined output according to switching algebra Not (’), And (.), Or (+) Logic Variable - a symbol representing the two possible switching algebra values of 0 and 1 x, y, z Logic Literal - the values 0 and 1 or a logic variable or it’s complement x, y’, z, x’

9 Logic Expressions - Precedence
Like standard algebra, switching algebra operators have a precedence of evaluation NOT operations have the highest precedence AND operations are next OR operations are lowest Parentheses explicitly define the order of operator evaluation If in doubt, USE PARENTHESES!

10 Truth Tables A truth table shows all possible inputs and outputs of a function. There is one-to-one correspondence between a Boolean function and its turth table. Remember that each input variable represents either 1 or 0. Because there are only a finite number of values (1 and 0), truth tables themselves are finite. A function with n variables has 2n possible combinations of inputs. Inputs are listed in binary.

12 Switching Algebra Based on Boolean Algebra
Developed by George Boole in 1854 Basic laws of Boolean Algebra will be implemented as logic gates. Networks of logic gates allow us to manipulate digital signals Can perform numerical operations on digital signals such as addition, multiplication Can perform translations from one binary code to another. A switching (Boolean) variable X can take on only one of two values: X = 0, if X ≠ 1 X = 1, if X ≠ 0

14 Switching Algebra Operations - AND
Also known as the conjunction operation; output is true only if all inputs are true Algebraic operators are ‘·’, ‘&’, ‘’ X 1 Y X·Y

15 Switching Algebra Operations - OR
Also known as the disjunction operation; output is true if any input is true Algebraic operators are ‘+’, ‘|’, ‘’ X 1 Y X+Y

26 Algebraic Minimization
Process is to apply the switching algebra postulates, laws, and theorems to transform the original expression Hard to recognize when a particular law can be applied Difficult to know if resulting expression is truly minimal Very easy to make a mistake Incorrect complementation Dropped variables

30 Boolean Expressions and Circuits
Any Boolean expression can be converted into a circuit by combining basic gates. The precedences are explicit in a circuit. Make sure that the hardware does operations in the right order! (x + y’).z + x’

34 Minterms A minterm is a special product of literals
Each input variable, either complemented or uncomplemented, appears exactly once Each minterm is 1 for exactly one combination of inputs, and 0 for the others A function with n variables has 2n minterms (since each variable can appear complemented or not) A three-variable function, such as f(x,y,z), has 23 = 8 minterms

40 Maxterms A maxterm is a special sum of literals
Each input variable, either complemented or uncomplemented, appears exactly once Each maxterm is 0 for exactly one combination of inputs, and 1 for the others A function with n variables has 2n maxterms

48 Other Gates NAND gate: NOR gate:

54 Avoid This Configuration
The exact output voltage is about 1-2 V. After a few seconds, the chip will have internal damage

55 Three-State Outputs Logic outputs have two normal states, LOW and HIGH, corresponding to logic values 0 and 1. The output is strongly connected to either Vcc or Gnd Some outputs have a third electrical state: High-Impedance, Hi-Z, or floating state In Hi-Z state: The output behaves as an open-circuit, i.e., it appears to be disconnected from the circuit There is a leakage current of up to 10 μA. An output with three possible states is called a three-state output or tri-state output.

58 Summary So far: A bunch of Boolean algebra trickery for simplifying expressions and circuits The algebra guarantees us that the simplified circuit is equivalent to the original one Introducing some standard forms and terminology Next: An alternative simplification method We’ll start using all this stuff to build and analyze bigger, more useful, circuits 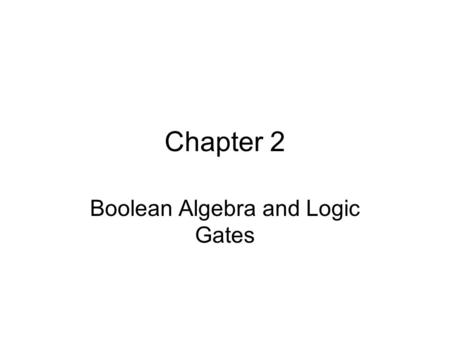 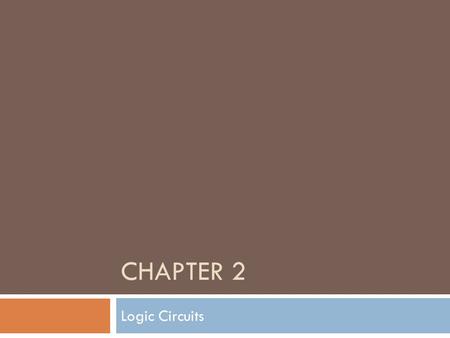 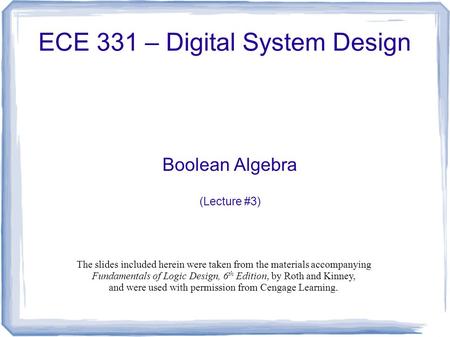 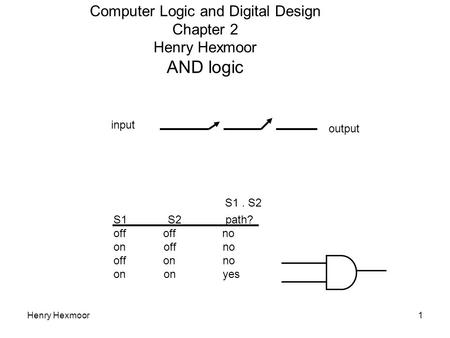 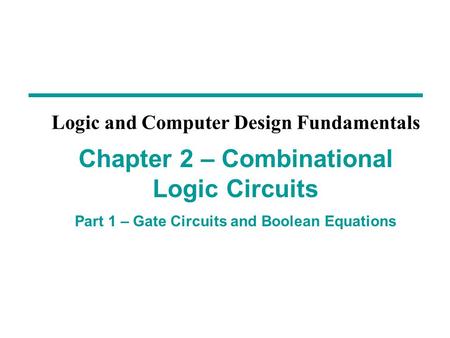 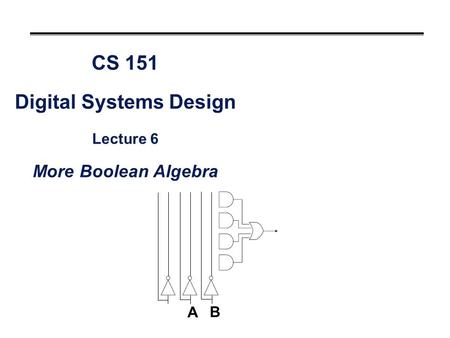 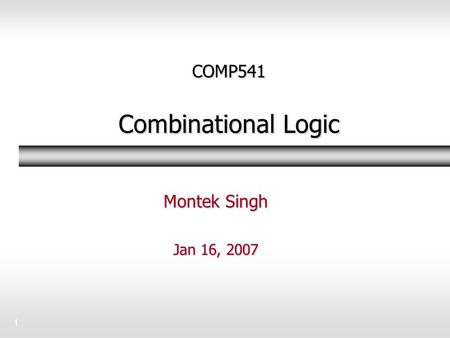 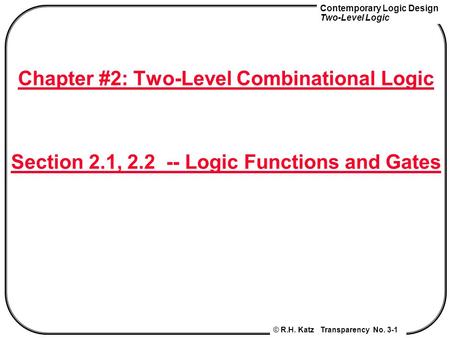 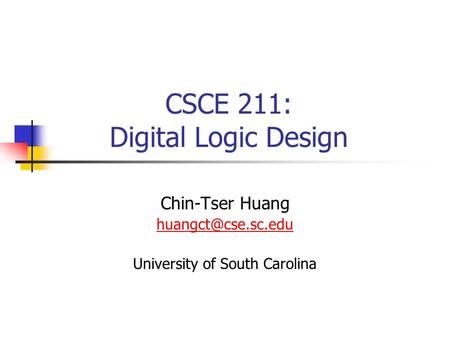 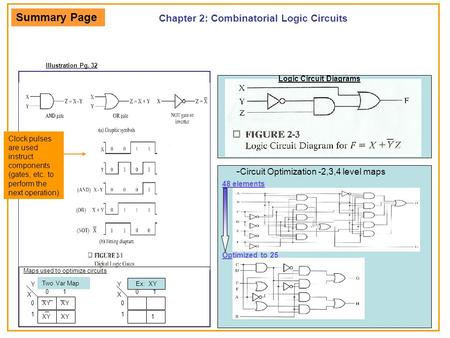 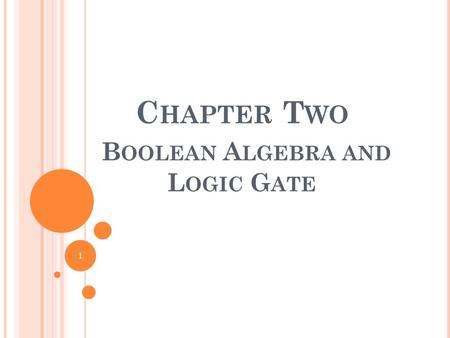 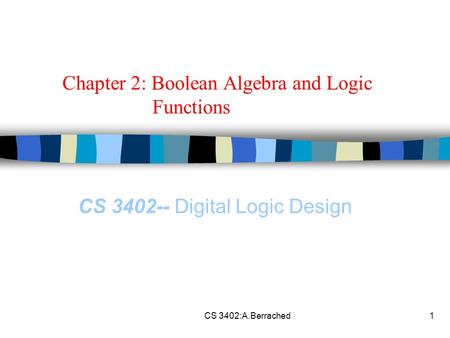 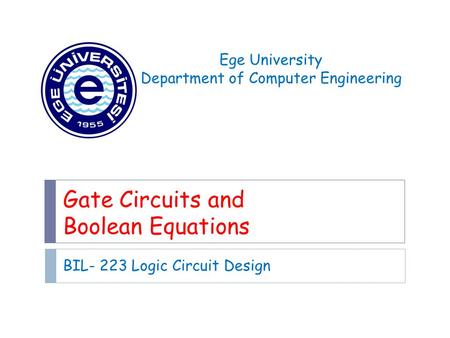 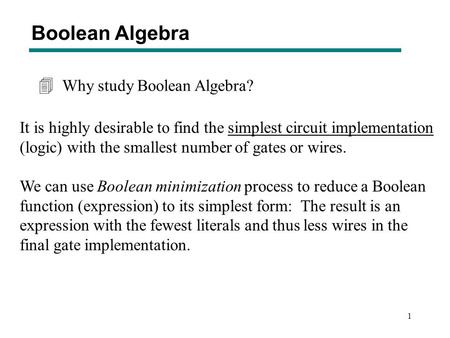 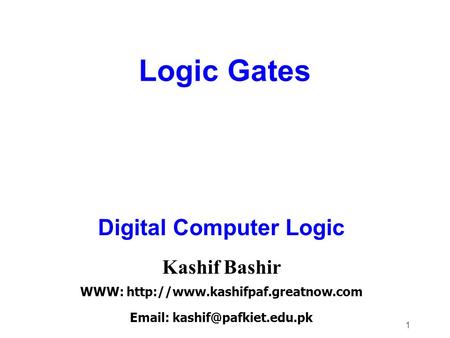 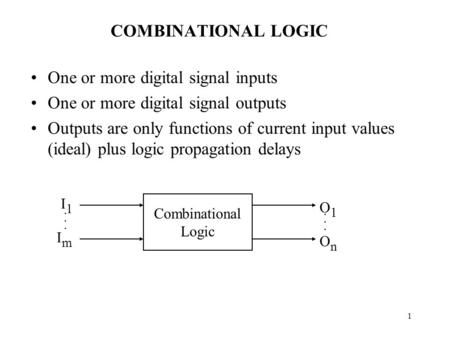 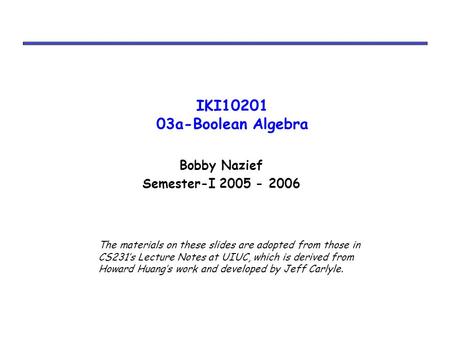 IKI a-Boolean Algebra Bobby Nazief Semester-I The materials on these slides are adopted from those in CS231’s Lecture Notes at UIUC, 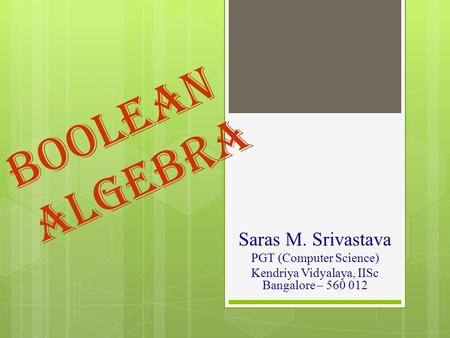 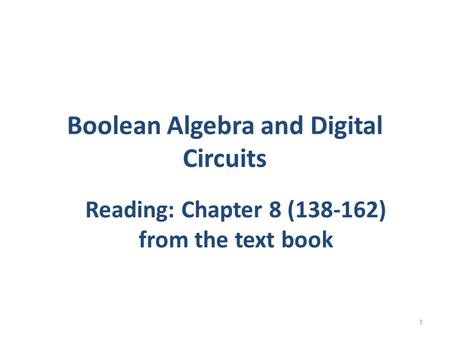 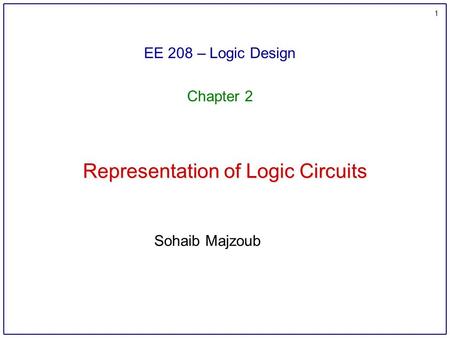