2 S E C T I O N 1 The Right to Vote
How have voting rights changed over time in the United States? What constitutional restrictions exist on the States’ power to set voting qualifications? Chapter 6, Section 1

3 The History of Voting Rights
The Framers of the Constitution purposely left the power to set suffrage qualifications to each State. Suffrage means the right to vote. Franchise is another term with the same meaning. The electorate is all of the people entitled to vote in a given election. Initially, the right to vote in America was limited to white male property owners. Today, the size of the American electorate is greater than 200 million people. Nearly all citizens at least 18 years of age can qualify to vote. Chapter 6, Section 1

4 Extending Suffrage The expansion of the electorate to its present size happened in four (your book says 5) fairly distinct stages: During the early 1800s, religious, property, and tax payment qualifications were gradually eliminated. The 15th Amendment (1870) was intended to end race-based voting requirements. In 1920, the 19th Amendment prohibited the denial of the right to vote because of sex. Chapter 6, Section 1

5 Extending Suffrage The expansion of the electorate to its present size happened in four (your book says 5) fairly distinct stages: The 1960/70s: The Voting Rights Act of 1965 secured the right to vote for minorities The 23rd Amendment (1961) granted citizens of Washington D.C. the right to vote in presidential elections The 24th Amendment (1964) eliminated the poll tax The 26th Amendment (1971) lowered the voting age to 18. Chapter 6, Section 1

6 S E C T I O N 2 Voter Qualifications
What are the universal requirements for voting in the United States? What other requirements have States used or still use as voter qualifications? Chapter 6, Section 2

8 Universal Requirements
There are three factors that States require people to meet to be eligible to vote: Citizenship All States require United States citizenship in order to vote (Arkansas was the last state to allow foreign born residents the right to vote – 1926). Residence One must be a legal resident of a State to vote in elections. Most States require residency for minimum amounts of time in order to vote in the State. Age The 26th Amendment requires that no State set a minimum voting age above 18. No state has a voting age lower than 18. Chapter 6, Section 2

9 Other Requirements All states except North Dakota require citizens to register to vote. Registration is a procedure of voter identification intended to prevent fraudulent voting. Eleven states allow for same day voter registration States also have restrictions on the right to vote on certain members of the population, such as those found to be mentally incompetent or people convicted of serious crimes. Eleven states have laws that allow for stripping convicted felons of the right to vote permanently. 48 states allow for some sort of voter restriction for convicted felons Chapter 6, Section 2

10 Recent Issues in Voter Qualification
In recent years, many states have passed voter identification laws. These laws require that voters present a government issued I.D. before voting. In addition to voter identification laws, many of the same states have passed laws that have reduced opportunities to vote, such as Reducing the number of early voting days Make it more difficult to register to vote Make it harder for college students to register Chapter 6, Section 2

11 Recent Issues in Voter Qualification
Proponents of these laws argue they are needed to reduce voter fraud Opponents argue that these efforts serve to disenfranchise the poor, minorities, the elderly, and young voters. Critics point out that most states that have passed these laws are controlled by Republicans, and that the groups most affected by the changes tend to vote Democratic. Chapter 6, Section 2

12 S E C T I O N 3 Suffrage and Civil Rights
What rights are guaranteed by the 15th Amendment, and what tactics were used in the past to circumvent those rights? How significant was civil rights legislation passed in 1964? What are the provisions and effects of the Voting Rights Act of 1965? Chapter 6, Section 3

16 The Voting Rights Act of 1965
The Law Major Provisions of the Voting Rights Act of 1965: Abolishment of the Poll Tax Outlawed the use of any literacy test. Mandated preclearance The Supreme Court struck down the preclearance formula in 2013. Amendments to the law required ballots to be printed in languages other than English. Chapter 6, Section 3

18 S E C T I O N 4 Voter Behavior
What is the nonvoting problem and what is its scope? Why do people not vote? How can we compare the voting behavior of voters and nonvoters? What are the sociological and psychological factors that affect voting? Chapter 6, Section 4

19 Nonvoters Only 50.1 percent of eligible voters cast ballots in the 2000 presidential election, and only percent of the electorate voted for the members of the House of Representatives. In 2008, that number increased to 61.6% Number decreased in 2012 to 57.5% Voter turnout significantly decreases in midterm elections, congressional elections held in years when there is no presidential election. Chapter 6, Section 4

20 Why People Do Not Vote Some people cannot vote for various reasons, such as physical or mental illness, unexpected travel, and resident alien citizenship status. Ballot Fatigue However, most nonvoters do not vote because voting is in some way inconvenient, they do not believe that their vote will make a difference, or they distrust politics and political candidates. Chapter 6, Section 4

22 Psychological Factors
Voters’ perceptions of their party, the candidates, and the issues significantly affects their voting. Party Identification The loyalty of people to a particular political party is the single most significant and lasting predictor of how a person will vote. Candidates and Issues Candidates and issues are two short-term factors that can influence even the most loyal Democrat or Republican. People may vote out of their chosen party if they dislike a candidate or the party’s stand on a particular issue. Chapter 6, Section 4 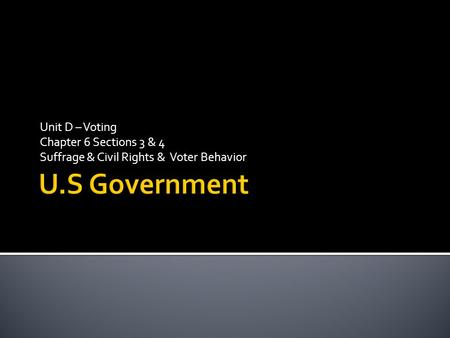 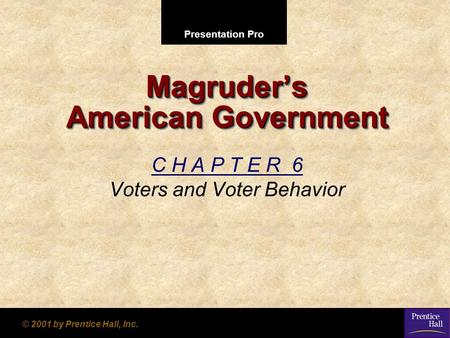