1 The Nervous System “The right half of the brain controls the left half of the body. This means that only left handed people are in their right mind.”

6 Neurons The basic unit of structure and function in the nervous system
Cells that conduct impulses. Made up of dendrites, cell body and an axon

8 In other words, there’s a lot of traffic going on in the neurons of your Central Nervous System.
Beware of a traffic jam

11 How is an impulse transmitted?
Stimulus excites sensory neuron. Depolarization (a change in charge due to sodium ions) creates a wave of changing charges down the axon. Impulse moves across synapse (tiny space between one neuron’s axon and another’s dendrites) with the help of neurotransmitters This is an image of neurons located in the cerebral cortex of a hamster.

14 The Cerebellum Muscle coordination is developed here as well as the memory of physical skills. If the cerebellum is injured, your movements become jerky. When you see an amazing athlete perform, you are watching a well-trained cerebellum at work.

15 The Brainstem Made up of the medulla oblongata, pons and midbrain.
Medulla oblongata controls involuntary activities such as heart rate and breathing Pons and midbrain act as pathways connecting various part of the brain with each other. Sometimes called the reptilian brain, because it resembles the entire brain of a reptile.

17 Show what you know! 3. The Peripheral Nervous System consists of what?
4. What is the difference between the somatic and autonomic nervous systems?

18 Show what you know! 5. Draw a neuron and label the axon, dendrite and cell body. 6. Describe what roles the dendrites and axons play in a neuron’s transmission of impulses.

19 Show what you know! 7. What are the three types of neurons?
8. What is the sequence of events when someone taps you on the shoulder? (5 steps)

20 Show what you know! 9. What does the cerebrum enable us to do?
10. Compare and contrast the roles of the cerebellum and brain stem.

Download ppt "The Nervous System “The right half of the brain controls the left half of the body. This means that only left handed people are in their right mind.”" 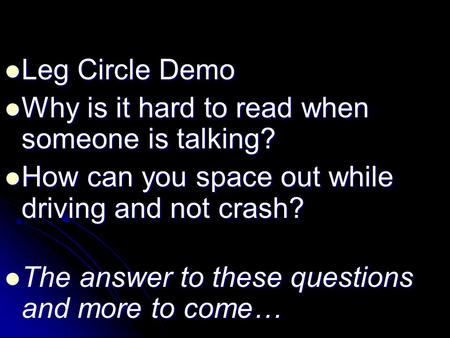