2 Image noise In finding the interesting features (such as edges) in an image, the biggest problem is noise. Noise is: Sensor error in acquiring the image Anything other than what you are looking for Noise is often caused by underexposure (low light, high film speed) Noisy image from Wikipedia page on image noise

4 Image noise “Simple” noise model:
Independent stationary additive Gaussian noise The noise value at each pixel is given by an independent draw from the same normal (i.e., Gaussian) probability distribution The scale (σ) determines how large the effect of the noise is. Result image “Perfect” image additive noise where z is a random number between 0 and 1.

5 Image noise Issues: Advantages:
This model allows noise values that could be greater than maximum camera output or less than zero. For small standard deviations, this isn’t too much of a problem - it’s a fairly good model. Independence may not be justified (e.g., damage to lens). Noise may not be stationary (e.g., thermal gradients in the ccd). Advantages: Fairly accurate Relatively easy to determine response of filters to such noise

6 Linear filters We use linear filtering to reduce the effect of noise (among other things). General process: Form new image, where pixels are a weighted sum of nearby pixel values in original image, using the same set of weights at each point Properties: Output is a linear function of the input Output is a shift-invariant function of the input (i.e. shift the input image two pixels to the left, the output is shifted two pixels to the left)

7 Linear filtering Filtering operations use a “kernel” or “mask” composed of weights to determine how to compute the weighted average in a neighborhood. Usually, the mask is centered on the pixel and the weights are applied by multiplying by the corresponding pixel in the image and summing. ** ** ** ** ** ** 39 ** ** ** 1/9 1/9 1/9 3x3 Mask Input Image Output Image

8 Mean filtering A mean filter (as on the previous slide) averages the pixels in some neighborhood (such as the 3x3 box surrounding the pixel). For this neighborhood, every pixel in the output (except for the borders) is defined as:

9 Kernel The kernel is a 2D array or matrix or image.
The kernel has an origin that represents the location that is multiplied by the pixel at the location of the output pixel. Usually at the center of the kernel, but not necessarily Kernel for mean filtering in a 3x3 neighborhood (center is bold): For smoothing or averaging, the kernel coefficients always add up to one. Larger (sometimes much larger) kernels are common. 1/9 1/9 1/9

10 Image boundaries At the image boundary, we can’t use the same process, since part of the kernel will be outside of the input image. Some methods for handling the boundary: Shrink the output image (ignore the boundaries) Consider every pixel outside of the input to be: Black (zero) The same as the nearest pixel inside the image Extends the borders infinitely A mirror image of the pixels inside the image Less likely to appear as edge at boundary, but second order effects occur (second derivative may appear large)

12 Mean filtering As the size of the kernel is increased, the noise is more smoothed, but so is the rest of the image.

14 Convolution Linear filtering can be performed using a process called discrete convolution. Represent the pixel weights as an image, K K is usually called the kernel in convolution Operation is associative (if defined correctly) Continuous convolution is common in signal processing (and other fields), but, since images are not continuous, we will use only discrete convolution

16 Convolution Mathematically:
Odd definition preserves associativity and commutativity. Subtracting u and v from the image indices implies that the kernel is flipped before applying it to the image. All linear operations can be written as a convolution with some kernel. Variables u and v range over the size of the kernel. Note that the kernel origin (0,0) is usually at the center of the kernel (but does not need to be).

18 Convolution Convolution is written in shorthand as O = K * I.
The “flipping” preserves commutativity: K * I = I * K and associativity: J * (K * I) = (J * K) * I, but only if the borders are handled correctly. Must expand the output, treating values outside the input image as zero.

20 Example: smoothing by averaging
Kernel Input Output Here is the point to introduce some visual “notation”. I’ve given the kernel as an image on the top. Usually, these images are white for the largest value, and black for the smallest (which is zero in this case). The point of this pair of images is that if you convolve the one on the left with the kernel shown above you get the one on the right, which is nothing like a smoothed version of the one on the left (there’s some fairly aggressive ringing). Explain the ringing qualitatively in terms of the boundaries of the kernel, and point out that the effect would disappear if there weren’t sharp edges in the kernel. 20

21 Smoothing with a Gaussian
Smoothing with an average actually doesn’t compare at all well with a defocused lens (e.g., in an eye). A defocused lens smoothes an image symmetrically, which is what we want. Most obvious difference is that a single point of light viewed in a defocused lens looks like a fuzzy blob, but the averaging process would give a little square. We want smoothing to be the same in all directions. I always walk through the argument on the left rather carefully; it gives some insight into the significance of impulse responses or point spread functions. A Gaussian gives a good model of a fuzzy blob

22 An isotropic Gaussian Plot of:
The constant is necessary so that the function integrates to 1. Plot of: The image shows a smoothing kernel proportional to a Gaussian (a circularly symmetric fuzzy blob) Sigma (σ) is often referred to as the scale of the Gaussian

24 Gaussian smoothing Unfortunately, the sum of the values for the kernel on the previous slide is only We need to normalize the kernel by dividing each value by The sum is now 1.

25 Smoothing with a Gaussian
You want to point out the absence of ringing effects here. 25

27 Differentiation Recall that:
This is linear and shift invariant, so it must be the result of a convolution.

28 Differentiation and convolution
We can approximate this as: This is called a “finite difference.” It is definitely a convolution – what is the kernel? Often called the gradient when applied to an image. This finite difference (gradient) measures horizontal change. By itself, it’s not a very good way to do things, since it is very sensitive to noise. I tend not to prove “Now this is linear and shift invariant, so must be the result of a convolution” but leave it for people to look up in the chapter.

29 Gradient kernels To determine the horizontal image gradient, we could use one of the following kernels: The first has better “localization,” but shifts the image by half of a pixel. For vertical image gradients, we use one of: -1 1 -1 1 -1 1

30 Finite differences (horizontal)
Large (bright) values for light/dark transitions Kernel: 1 -1 Negative (dark) values for dark/light transitions Detects only horizontal changes. Small (grey) values for non-transitions Now the figure on the right is signed; darker is negative, lighter is positive, and mid grey is zero. I always ask 1) which derivative (y or x) is this? 2) Have I got the sign of the kernel right? (i.e. is it d/dx or -d/dx).

31 Finite differences Finite difference filters respond strongly to noise. Image noise results in pixels that look very different from their neighbors Generally, the larger the noise, the stronger the response.

33 Finite differences and noise
What is to be done? Intuitively, most pixels in images look quite a lot like their neighbors. This is somewhat true even at an edge; along the edge they’re similar, across the edge they’re not. This suggests that smoothing the image should help, by forcing pixels different to their neighbors (noise pixels?) to look more like neighbors.

35 Filtered noise Independent stationary Gaussian noise convolved with a Gaussian kernel. The scores are correlated over the same scale as the kernel.

36 Filtered noise Independent stationary Gaussian noise convolved with a Gaussian kernel. The scores are correlated over the same scale as the kernel.

37 Filtered noise Independent stationary Gaussian noise convolved with a Gaussian kernel. The scores are correlated over the same scale as the kernel.

38 Median filtering A median filter takes the median value in the neighborhood of a pixel, rather than a weighted average. Is this a convolution? Advantage: It doesn’t smooth over region boundaries. Noise added to the images is Gaussian. 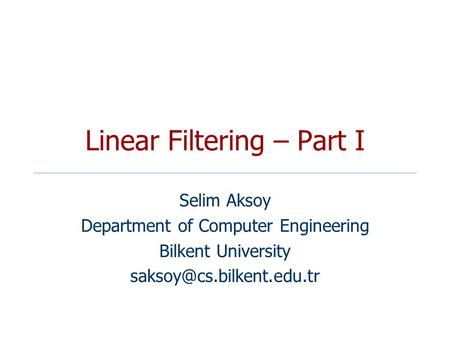 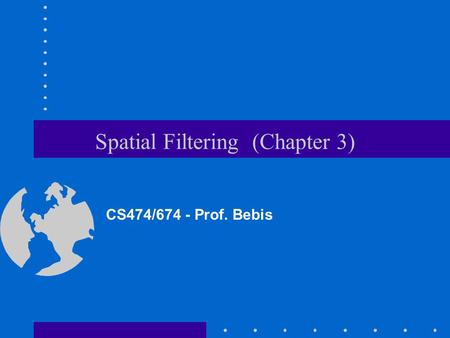 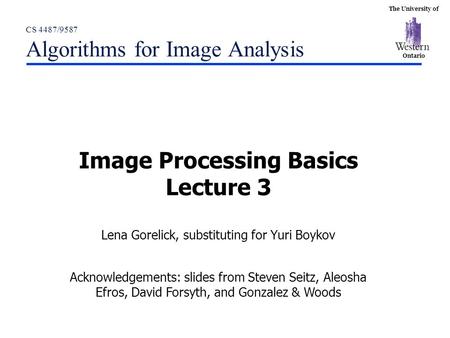 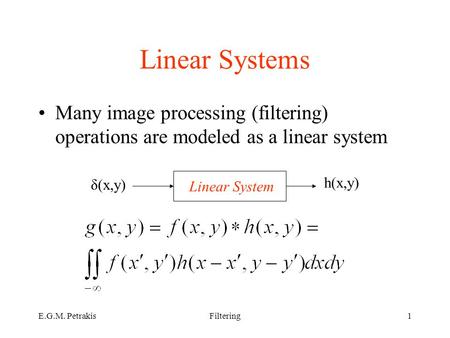 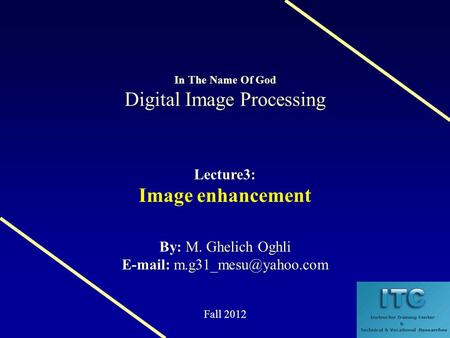 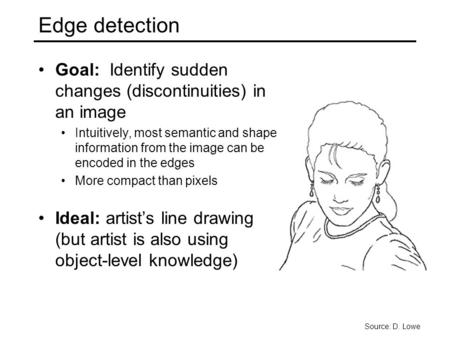 Edge detection Goal: Identify sudden changes (discontinuities) in an image Intuitively, most semantic and shape information from the image can be encoded. 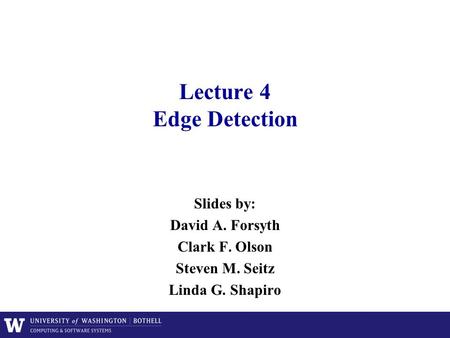 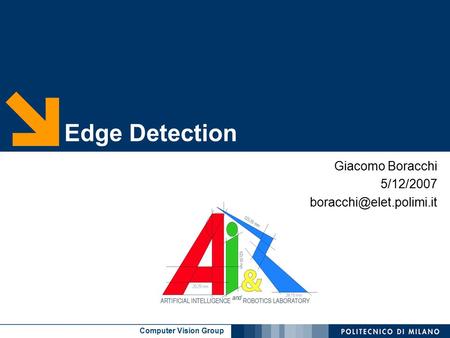 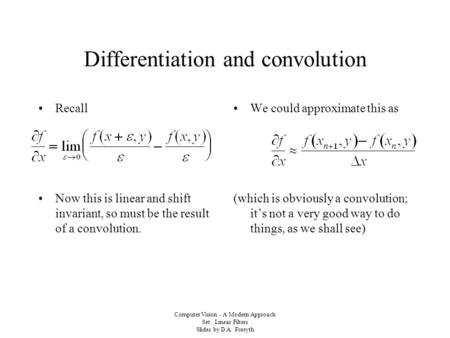 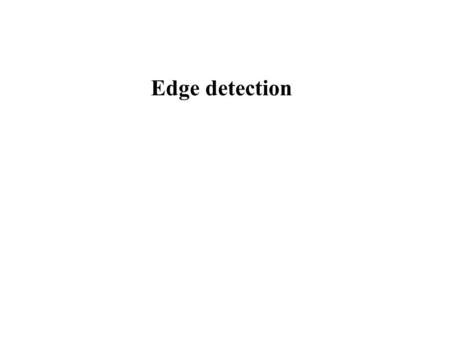 Edge detection. Edge Detection in Images Finding the contour of objects in a scene. 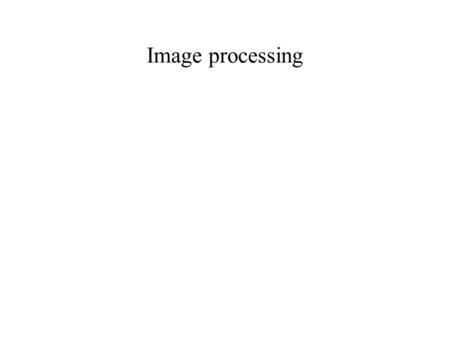 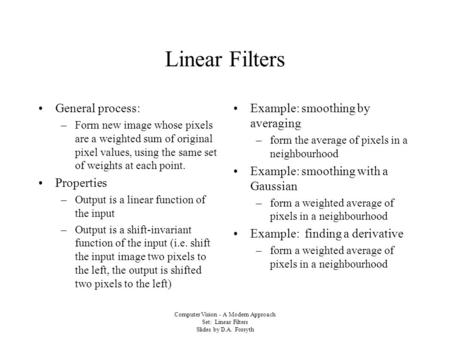 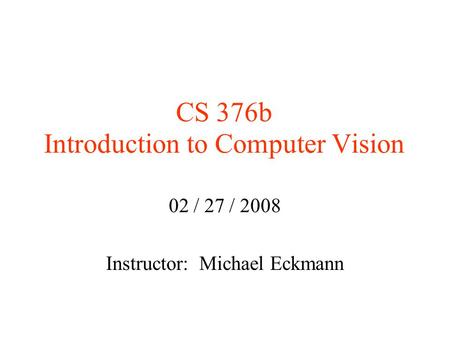 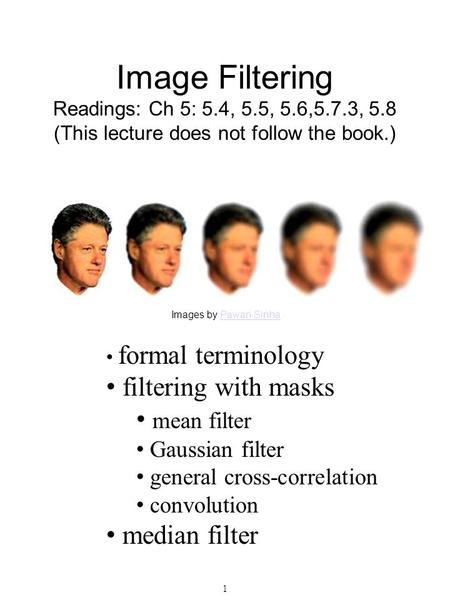 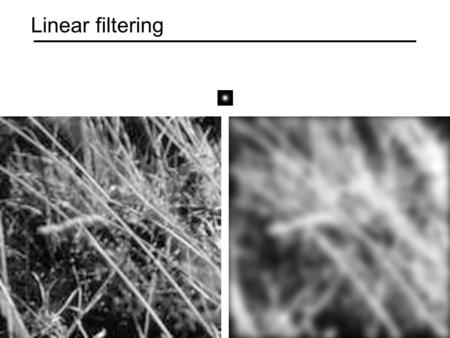 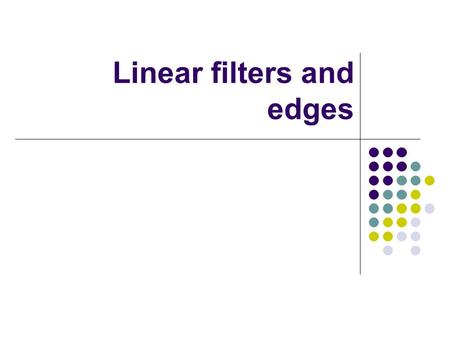 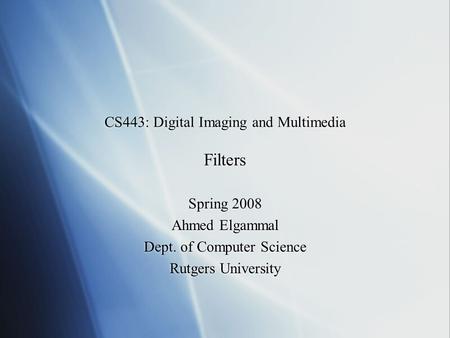 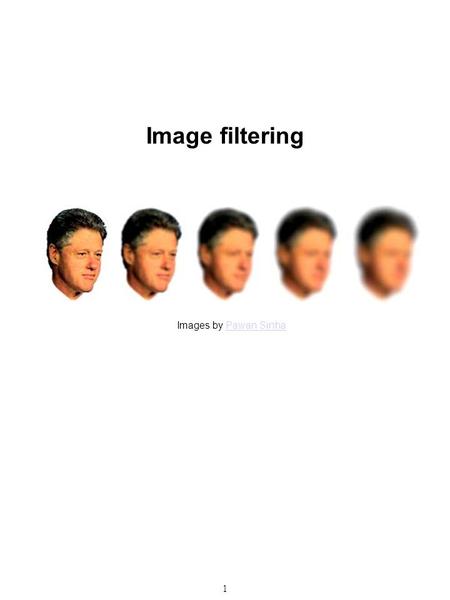 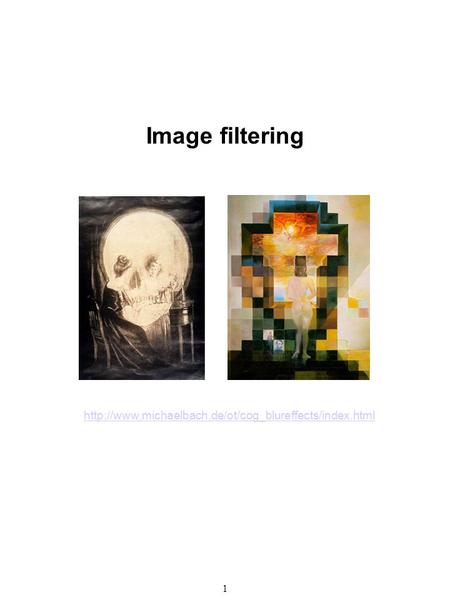 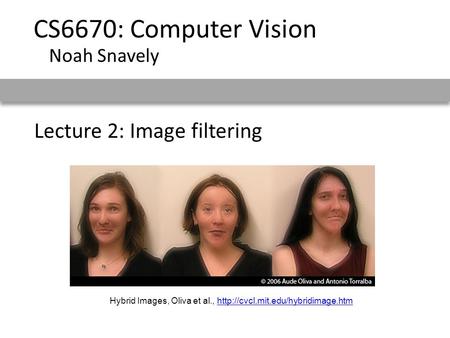