Presentation on theme: "Chemical Bonding What it’s all about. Why do atoms bond together? Why should we bother to study electron configurations? –Helps determine the way atoms."— Presentation transcript:

1 Chemical Bonding What it’s all about

3 Why do atoms bond? Only noble gases have complete s and p orbitals. They are already in a state of atomic “nirvana” Other atoms seek the same electron configuration as noble gases. Why? It’s more stable. They seek “nirvana”. The magic number is 8 electrons in the valence energy level aka the “stable octet”.

4 Ionic Bonding An ionic bond occurs between a metal and a nonmetal Atoms lose or gain electrons to become charged ions Metals tend to lose electrons to nonmetals and become positively charged cations Nonmetals tend to gain electrons from metals and become negatively charged anions These oppositely charged ions attract each other to form strongly bonded compounds The formation of chemical bonds is always accompanied by a release of energy.

6 Ionic Bonding III Each part of a binary ionic compound has become isoelectronic with the nearest noble gas, i.e., the same electronic structure. Each part of a binary ionic compound is stable, i.e., has 8 e- in its valence energy level, and has gained or lost e- accordingly, and are electrostatically attracted to each other. In the case of period 2 metals (Li, Be, B) the ion will have the same electron configuration of He.

Download ppt "Chemical Bonding What it’s all about. Why do atoms bond together? Why should we bother to study electron configurations? –Helps determine the way atoms." 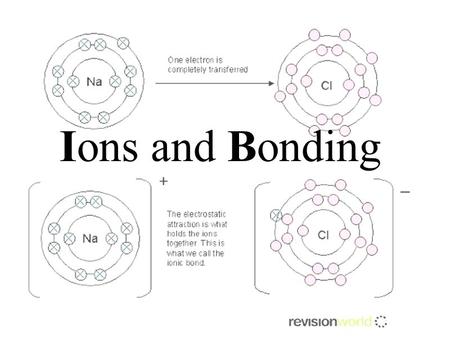 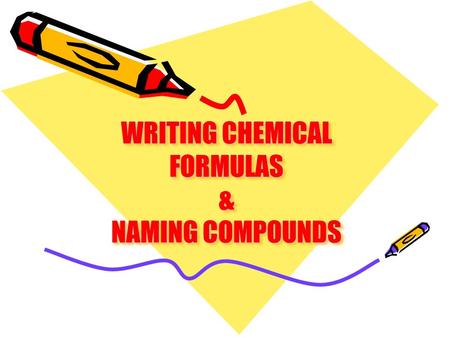 WRITING CHEMICAL FORMULAS & NAMING COMPOUNDS. Electrons in the same group have similar chemical properties because they have the same number of electrons. 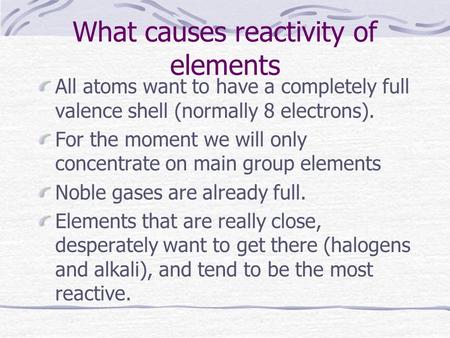 What causes reactivity of elements All atoms want to have a completely full valence shell (normally 8 electrons). For the moment we will only concentrate.