3 Economic Distress A large part of the farmers problems stemmed from the issuing of Greenbacks during the Civil War. $500 million were issued, but these weren’t backed by hard currency. When the government began to take greenbacks out of circulation, general discontent began especially by those who had borrowed money. This increased the value of money in circulation and led to people who borrowed money having to pay it back with dollars (which were worth more then the money they borrowed). Also, farmers received less money for their crops due to the change in currency, and this made them lose more money. (i.e. Bushel of corn = $2.00 in 1867 and $0.68 in 1887.)

4 Problems with the Railroads
Since railroads did not have competition, they could set the shipping prices as they pleased. Many farmers paid more to ship goods from North Dakota to Minneapolis, than it would cost to ship goods from Chicago to England. Grain brokers and merchants also made deals with railroad companies to control the shipping and market costs of goods. The fact that farmers bought most goods on credit, and the interest rates were very high, coupled with the issues with shipping rates and the currency dispute, farmers were losing at every turn.

6 The Farmers’ Alliance Oliver Hudson Kelley began the Patrons of Husbandry in 1867, and this organization was meant to push for reforms. It was also known as the Grange. The Grange would teach its members how to organize, how to set up farmers coops, and how to sponsor state legislation to petition railroads. Farmers’ Alliances came out of the Grange, and they lectured on lower interest rates on loans and government control over railroads and banks. Membership in these groups grew to 4 million members, especially in the South and West.

7 The Populist Party Platform
Out of the farmer organizations came the People’s Party or Populist Party. The leaders of farmers’ alliances and Grange knew they needed a base of political power to be heard. Economic Reforms: Increase in Money Supply Graduated Income Tax Federal Loan Program Government Reforms: Election of Senators by popular vote Single terms for President and V.P. Secret Ballot to end fraud Social Reforms 8 hour work day Restrictions on immigration These were so attractive to farmers that the Populist presidential candidate in 1892 received 10% of the vote. The Democratic Party eventually took on parts of their platform.

9 The Panic of 1893 In 1893, the Philadelphia and Reading Railroad went bankrupt, followed by the Erie, Northern Pacific, Union Pacific, and Santa Fe. This was due to railroads growing more rapidly than the markets. The gold reserves wore thin due to the purchasing of silver, and this led to panic. Silver plummeted as well and led to the closing of mines and by the end of the year, over 15,000 businesses and 500 banks collapsed. The bottom fell out of the economy and this led to depression as 3 million people lost their jobs (1/5th of the population unemployed) and farmers went hungry.

13 Bryan & The Cross of Gold
The 1896 campaign pitted the Rep. candidate William McKinley against the Dem. William Jennings Bryan. McKinley firmly backed the gold standard, while Bryan backed bimetallism. His impassioned speech, known as the cross of gold speech, made him a strong opponent: “Having behind us the producing masses of this nation and the world, supported by commercial interests, the laboring interests, and the toilers everywhere, we will answer their demand for a gold standard by saying to them: You shall not press down upon the brow of labor this crown of thorns, you shall not crucify mankind upon a cross of gold.”

15 The End of Populism Bryan’s free-silver stand had led gold bug Democrats to nominate their own candidate. His support was also weakened in cities where consumers feared inflation. Bryan also did not have the funding or support from the wealthy to campaign effectively. McKinley won the election and Populism fell.

16 McKinley’s poster… What do you notice??? Although populism fell, it left behind two powerful legacies: The downtrodden could organize and have political impact. An agenda of reforms which would be enacted later in the 20th century. 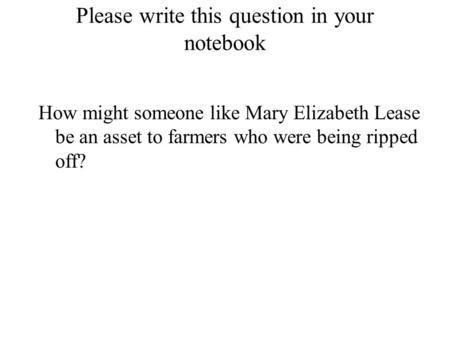