5 Germanic Kingdoms Emerge
Clovis was leader of the Franks Clovis brings Christianity to the region Fears defeat by another Germanic tribe and appeals to Christian God: Battle shifts in his favor and Franks win Clovis and 3,000 of his warriors ask a bishop to baptize them By 511, Clovis had united the Franks in one kingdom

8 Germanic Kingdoms Emerge
Mayor of the Palace: Position which had become the most powerful in Frankish kingdom Official power: Had charge of the royal households and estates (like a lord) Unofficial power: Led armies and made policy, essentially ruling the kingdom

10 Germanic Kingdoms Emerge
Charles Martel or Charles the Hammer Defeated Muslim raiders from Spain at the Battle of Tours in 732 Victory was highly significant for European Christians, Charles was a Christian hero (lose battle, lose Europe?) At his death, he passed his power to Pepin the Short Pope anoints Pepin “King by the grace of God,” thus beginning the Carolingian Dynasty- family that would rule the Franks from

13 Charlemagne His conquests against the Muslims and to the south and east spread Christianity He reunited Western Europe for the first time since the Roman Empire Was now the most powerful king in western Europe In 800, he traveled to Rome to protect the pope  the pope rewards Charlemagne by crowning him emperor

14 Germanic Kingdoms Emerge
Charlemagne as King Charlemagne strengthened his power by limiting authority of the nobles Sent out royal agents to check on powerful landowners Regularly visited his kingdom Encouraged learning- surrounded himself with scholars and opened new monasteries Charlemagne died in 814, his sons split up the kingdom- bad idea- Carolingian kings lost power and authority broke down This lead to the rise of feudalism

15 Germanic Kingdoms Emerge
Result: Historic coronation, which gave the pope the right to confer the title of Roman Emperor on European kings. Signaled the joining of Germanic power, the Church, and the heritage of the Roman Empire. 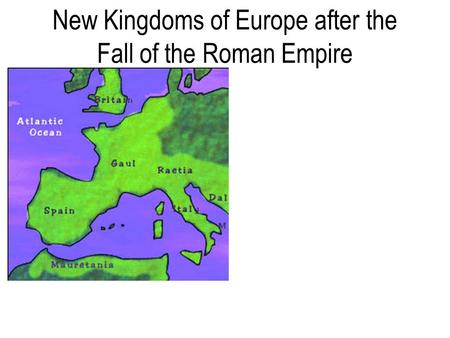