2 History The first juvenile court was created in 1899 in Cook County, IL It was founded on the idea that juvenile offenders don’t just need punishment – they also need protection and rehabilitation. Sometimes parents cannot (or will not) take care or control of their children, so the government must step in and take over Parens patriae: Literally means “parent of the country” in Latin It is interpreted to mean that the court can assume the role of a parent in teaching the child Juvenile courts were designed to be informal Moralistic approach Teach them community values

4 Procedures of juvenile court
(Green stands for the term that would be used in adult court) Commits offense (crime)  Taken into custody (arrested) Intake: Interview to consider the seriousness of the offense Initial or Detention hearing: State proves that an offense was committed and that there is reasonable cause to believe that the accused committed it

5 Procedures of juvenile court
Adjudicatory hearing (trial): Fact-finding hearing to determine the facts of the case. Closed to the public (unlike adult trials)  Dispositional hearing: Judge decides what sentence, or disposition, the offender should receive. The sentence is based on the predisposition report, which is a result of an investigation of the juvenile’s background

7 Probation Probation is the most common disposition
On probation, a juvenile must follow a set of conditions and meet regularly with a probation officer to make sure they are meeting their conditions. The juvenile may be ordered to: Attend school regularly Hold a steady job Attend counseling sessions Take weekly drug tests Be home by 8:00 pm Stay away from certain people

8 Types of juvenile cases
Delinquent offenders: Youths who have committed acts that would be considered crimes if committed by adults under federal, state, and local law. For example, the 12-year-old in In re Winship stole $112 from a woman, which would be considered larceny had he been an adult.

9 Types of juvenile cases: Status offenders
Status offenders: Youth who have committed acts that would not be crimes if committed by adults For example: Running away from home Skipping school Violating curfew Refusing to obey parents Underage consumption of alcohol

11 Types of juvenile cases
Neglected or abused children: These children need the court’s protection from a parent or guardian. Case of neglect: Parent/guardian is charged with failing to provide adequate food, clothing, shelter, education, or medical care Case of abuse: Child has been sexually, physically, or emotionally abused In either case, the court has to decide if the child should stay with the family, with other relatives, or in foster care.

13 Should juveniles be tried as adults?
Young offenders who are convicted in the adult criminal system almost always face harsher sentences They are in jail with adult criminals They don’t always receive rehabilitation programs like they would in juvenile correctional facilities Their criminal records are permanent and public Juvenile records, though, are usually sealed from the public

14 Should juveniles be tried as adults?
In 2005, the Supreme Court ruled that states may not impose the death penalty on offenders who were under the age of 18 when they committed their crimes In 2010, they ruled that juveniles who commit crimes in which no one was killed may not be sentenced to life in prison without the chance of parole They thought that would be “cruel and unusual punishment,” which is prohibited by the Eighth Amendment of the Constitution

15 Illinois law In Illinois, someone as young as 13 can be sent to the adult court if he/she is accused of murder, armed robbery, unlawful use of weapons on school grounds, and other serious offenses (see handout) In Mexico and most Latin American countries, juveniles can never be sent to the adult criminal system

16 Arguments FOR punishing young offenders as adults
Retribution: Offenders should be punished in proportion to the offense they committed Violent offenders deserve the most punishment possible under the law This gives the victims (or family of the victims) a sense of justice “They got what they deserved”

17 Arguments FOR punishing young offenders as adults
Deterrence: Youth who know they could be sent to an adult prison may be deterred (or discouraged) from committing those crimes It is sometimes believed that gang members and drug lords recruit young people to commit crimes for them, knowing that they will receive less serious punishments Therefore, adult-level punishment would deter this from happening

18 Arguments FOR punishing young offenders as adults
Keeping society safe Violent people should be behind bars so they cannot commit more crimes If they are in the juvenile system, they are free once they become adults

19 Example: El Ponchis Mexican authorities recently arrested “El Ponchis,” a 14-year-old who is accused of beheading 4 people and pushing their bodies off a bridge. Why did he commit such a heinous crime? His father says he was told to do so by older members of a drug cartel Under Mexican law, he would be tried in the juvenile system and would serve a maximum of only 3 years in juvenile detention

20 Arguments AGAINST punishing young offenders as adults
Young delinquents become worse criminals when they are exposed to adult prisoners Research shows that youth punished in the adults are TWICE as likely to re-offend Therefore, punishing youth as adults does not reduce crime

21 Arguments AGAINST punishing young offenders as adults
Most juvenile facilities provide better education programs than adult prisons Is this true?

22 Arguments AGAINST punishing young offenders as adults
Brain development: Scientists have generated new evidence about human brain development Brains do not fully mature until the age of about 25 The parts of the brain that control anger and allow people to anticipate consequences are particularly slow to develop Therefore, adolescents are not fully capable of controlling their impulses or actions 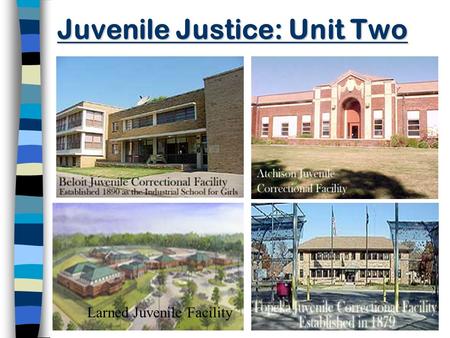 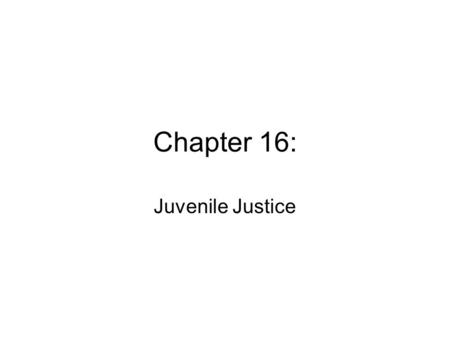