1 The Giver review chapters 1-5
How is Jonas different from others in his community? What is an assignment? What are 3 rules members of the community must follow? At 8 they have freedom of choice. The freedom involves what? What does release mean in the community? What does Jonas know about release? Who is Lilly? What was his father’s assignment? What occurs during the family unit morning and evening rituals? Who is the main character in the novel? What does everyone have to take once “stirrings” begin?

2 The Giver—review chapters 5-10
What physical feature did Jonas and Gabe have in common? What common rule was broken in the community? At what age did Jonas begin volunteer work? How are stirrings controlled? What is required when you apply for a child? What assignment did Asher receive? What assignment did Fiona receive? What happened at the Ceremony of Nine? Who was Caleb? How does the community react to Caleb? What is the job of the Receiver? How did Jonas feel after being selected as the new Receiver? What was the first unusual thing Jonas noticed when he went to his job the first time? Who was the last person selected as the Receiver? What happened to the person selected?

3 The Giver Chapter Review 5-10 continued
Describe what special things sevens receive. Where is Gabe? What happens on the day of placement? What is the problem with Gabe? What assignment does Asher and Fiona receive? Describe the Giver and his dwellings What was the first memory given to Jonas? What happens to the memories once they are transmitted to Jonas? What did Jonas experience for the first time? What color does Jonas see? During the first day of job training Jonas experienced__________. What memory was given to Jonas so he could see colors? Why is sameness important to the community? Can the Receiver marry? What happens if twins are born?

5 What attributes does the new Receiver have to have? Page 63

6 What is Jonas beginning to perceive and eventually “see”?
REVIEW Chapters 11-15 What is Jonas beginning to perceive and eventually “see”? How does the Giver transmit the memories? How does Jonas learn about climate control? What does Jonas learn he is seeing in the apple, Fiona’s hair, the faces in the crowd, and in the sled? From what are the people in the community being protected by not having to make choices? What memory worse than “sunburn” does the Giver transmit to Jonas? The Giver explains that Jonas will gain something by being the holder of memories. What will Jonas gain? Does the Giver ask for Jonas’s forgiveness? Why?

7 REVIEW CHAPTERS 16-19 What is the Giver’s favorite memory? Where does Jonas learn he can find the names of his parent’s parents? Why doesn’t Jonas want to play the “good guys/bad guys” game anymore? Twins are not acceptable in the community. Why? What determines their fate? Who was Rosemary? Why did she ask the chief Elder for release? After Rosemary’s “release”, what happened to the community? What does Jonas learn about what happens during release? 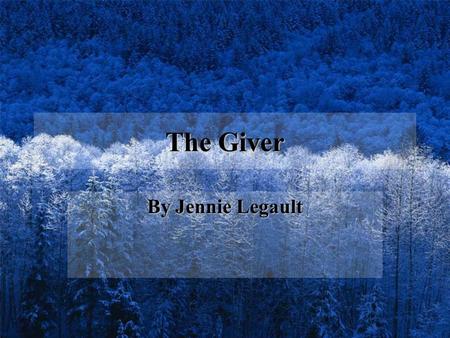 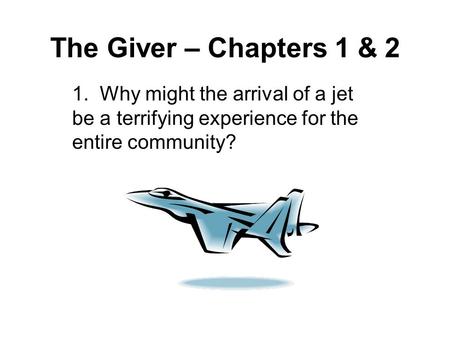 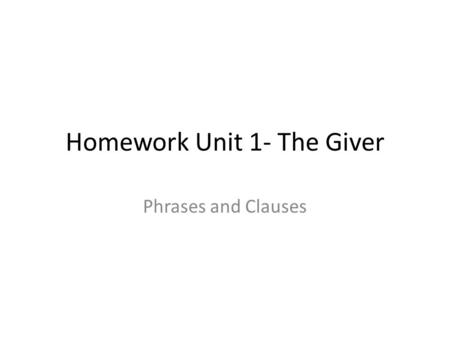 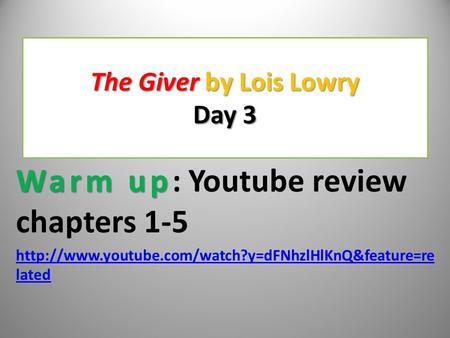 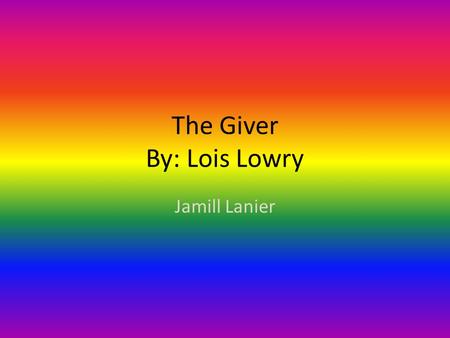