Presentation on theme: "The General Circulation of the Atmosphere"— Presentation transcript:

1 The General Circulation of the Atmosphere

3 What we need to know for today
Pressure gradient force: from High to Low pressure Coriolis force (effect): Results from the rotation of the planet. Maximum at the poles and no effect at the equator. Acts perpendicular to the direction of motion: changes the direction of the wind but not the wind magnitude. In the NH deflects the wind to the right. In the SH deflects the wind to the left. Winds aloft Balance between the pressure force and the Coriolis force. The wind is parallel to the isobars. Surface winds Balance between the pressure gradient force, the Coriolis force and the air friction. The wind crosses the isobars (from High to Low pressure).

4 Average Wind Structure
The direction and the magnitude of the winds at a given location can vary significantly during the day, and from day to day. The general circulation (GC) refers to the average (the prevailing) winds on a global scale (around the world). The GC of the atmosphere is the result of the uneven heating of the Earth’s surface. It is impacted by the Earths rotation. The GC transports and redistributes energy from one region to another (warm air towards the poles and cold air towards the equator).

5 The Single Cell Model This is a very simplified model based on the following three assumptions: The Earth’s surface is uniformly covered with water (no differential heating of the land and the oceans) The sun is always directly over the equator (no seasonal variations of the winds). The Earth does not rotate. No Coriolis effect. The only active force is the pressure gradient force.

6 Thermal circulations Due to uneven heating of the surface. Example:
South area heats up, North area cools Warmer southern air aloft moves north towards low pressure It then cools and sinks Surface pressure to the North increases Surface wind from N to S The surface air warms up and rises. The process continues

7 The Hadley Cell It is driven by the uneven heating of the Earth’s surface by the sun - thermally direct cell: warm air rises, cold air sinks. One Hadley cell in each hemisphere. The equator is warmer than the poles. Warm moist air at the equator rises upwards It expands, cools, and saturates, the water vapor condenses and forms clouds. It creates low surface pressure in the tropics. At the poles we have cool, dry, sinking air that creates high surface pressure in the polar region. The PGF (pressure gradient force) drives the surface winds from the poles towards the equator. The winds aloft close the cell by blowing from the equator towards the poles.

10 Winds Aloft Warm air above the equator and cold air above the polar regions Higher pressure at the equator, lower pressure both to the north and to the south of the equator The pressure gradient force is towards the poles, sets the air in motion The Coriolis force NH: to the right SH: to the left The wind turns right in the NH and left in the SH, becomes parallel to the isobars Westerly winds aloft in both the NH and SH. Easterly winds at the surface in both the NH and SH.

11 The Three Cell Model Keep two of the assumptions, relax the third:
The Earth is covered with a continuous ocean The sun is always directly over the equator The Earth rotates -> Coriolis force!

13 Three cell model: the Ferrel cell (30-60 deg)
Thermally indirect cell: cool air rises and warm air sinks Some of the sinking air in the horse latitudes heads toward the pole Deflected east by the CF Surface winds in NH: from the southwest (westerlies) At the polar front the westerlies encounter cold air moving down from the poles Air is forced to rise, some of it returns to the horse latitudes, completing the Ferrel cell, the rest heads for the pole Upper air winds in the Ferrel cell: from the northeast. William Ferrel William Ferrell

14 Three cell model: the polar cell (60-90 deg)
It is a Hadley type of circulation. Surface winds: from the north east (polar easterlies) Upper winds in NH: from the southwest Summary: two major areas of Low pressure (ITCZ and subpolar low), and two of High pressure (poles and subtropical highs)

18 Winds and Pressure Systems Aloft
The wind system aloft differs from the surface wind system. It is close to a geostrophic flow. There is no significant friction with the ground. The three cell model does not work that well in the middle latitudes. The winds aloft are stronger than on the ground. In the winter the gradients are bigger -> the winds are stronger. July January 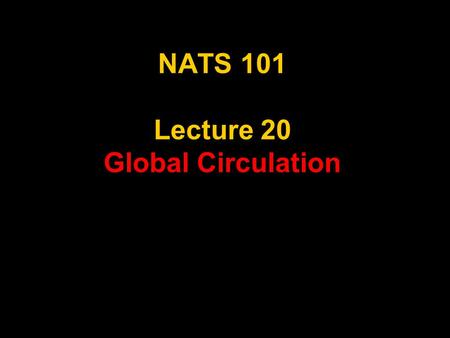