2 What is force? A force is a push or a pull one body exerts on another body. Sometimes it is obvious a force has been applied, but other forces are not as noticeable. Forces can cause a change in motion.

3 Balanced forces When two or more forces act on an object at the same time, the forces combine to form the net force. Forces on an object that are equal in size and opposite in direction are called balanced forces.

4 BALANCED FORCES Balanced forces do not cause acceleration. (any change in speed or direction)

6 Unbalanced forces The forces acting on an object may not always be opposite in direction. The net force that acts on this box is found by adding the two forces together.

7 Force Diagrams In what direction and with how much force would the object travel?

8 Types of Forces A force can be either balanced or unbalanced.
Common types of force include gravity, magnetism, friction, air resistance, or centripetal force

9 Friction Suppose you give a skateboard a push with your hand.
According to Newton’s 1st law of motion, if the net force acting on an object is zero, it will continue to move in a straight line with constant speed. Does the skateboard keep moving forward with a constant speed after it leaves you hand?

11 Friction Friction is the force that opposes motion between two surfaces that are touching each other. The amount of friction depends on; 1: kinds of surfaces 2: the force pressing the surfaces together

13 Gravity Gravity’s attractive force depends on
1. the distance between the two objects 2. the mass of the two object Every object exerts a gravitational force on every other object

15 GRAVITY Free fall- when the only force acting on a falling object is gravity. (9.8m/s/s) Do all objects regardless of mass fall at this rate? What about projectiles?

17 GRAVITY Air resistance- a type of fluid friction that objects falling through air experience. Paper vs.. Book Weight- The measure of the force of gravity on an object (scale) Mass- is a measure of the amount of matter in that object.

22 What about circular motion???
Bucket Demonstration What is the centripetal force for a satellite? Centripetal- “center seeking” Centripetal force- any force that causes an object to move in a circle. 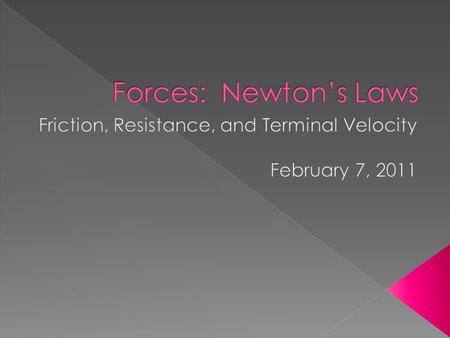