1 Australia The Land Down Under

8 Australia is made up of six states and two territories.
The 2 territories are The Australian Capital Territory and the Northern Territory

9 Australia is about the size of the United States.
18.3 million people live there, about as many people as in New York.

17 A Y E R S R O C K The Aborigines call it Uluru
A large monolith rock (a single large rock sticking out of the ground) in the flatlands in Uluru-Kata National Park in the Northern Territory, in the center of the continent. It is gray but it appears reddish because its iron content “rusts” at the surface. 12 stories tall Six miles around the base Named after Sir Henry Ayers, a gov’t official in the South Australia Ex. Stone Mountain, Georgia

18 Located in the states of South Australia and Western Australia
Only get 8-10 inches or rain each year (no snow) Some grasslands with sandhills, and salt lakes Europeans named it after Britain’s Queen Victoria in 1875 160,000 square miles Very few people live in there because it is too hot and dry GREAT VICTORIA DESERT

19 Who were the 1st settlers to Australia?
The first people to live in Australia were Aborigines who came from Southeast Asia thousands of years ago.

20 Australia becomes a colony
Captain James Cook claimed Australia for England in 1770. It was first used as a prison colony by the English. 6 colonies were created during the 18th &19th centuries.

21 Australia becomes a country!!!
Australia is a member of the Commonwealth of Nations. The Commonwealth, is an organization of fifty-three independent member states. Most of them were formerly parts of the British Empire.

22 Government Australia is a Constitutional monarchy.
They are a parliamentary democracy with a prime minister as head of the government. Queen Elizabeth II of Great Britain is the head of state. 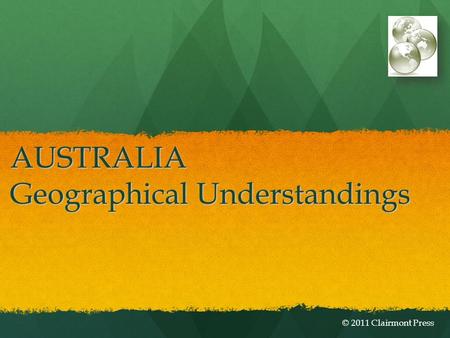 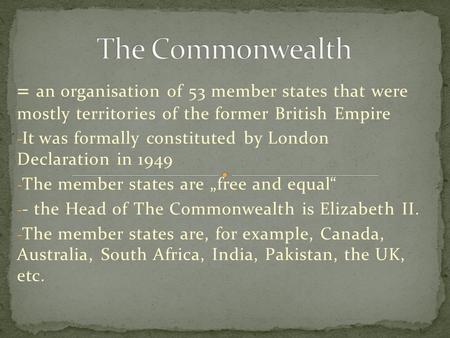