2 Biography Born James Mercer Langston Hughes on February 1, 1902 in Joplin, Missouri. Because of his parents separation he lived mainly with his maternal Grandmother in Lawrence, Kansas. Lived intermittently with his Mother in Detroit and Cleveland as well as with his Father in Mexico. After finishing high school in Cleveland, Ohio Hughes started writing poetry and left country to live with his Father.

3 Biography Hughes Mother supported his poetry while his business minded Father remained in a deep, scarring conflict with the poet. Entered Columbia University in 1920 but left after only one year. Worked as a merchant seaman and sailed to Africa. Worked at a nightclub in Paris. Hughes was even a busboy in Washington D.C.

4 Hughes Early Career While working various jobs in the early 1920s, Hughes was writing and publishing his works in two major African American periodicals: Opportunity and Crisis. Eleven of Hughes poems were published in Dr. Alain Lockes The New Negro (1925). In 1926 Hughes, with the patronage of Carl Van Vechten, published The Weary Blues: Langstons first volume of poems. Hughes essay The Negro Aritist and the Racial Mountain appeared in the Nation (1926). Also published in Countee Cullens anthology Caroling Dusk (1927).

5 Hughes Early Career Amy Springarn financed his college education at Lincoln University in Pennsylvania. Charlotte Mason subsidized him between 1928 and 1930 in New York City. Following the publication of Not without Laughter in 1930, the sales and reputation Hughes gained enabled him to support himself. By the 1930s Hughes was being called the bard of Harlem. Became heavily involved with radical politics and became a strong promoter of the American Communist Party. (* Let America Be America Again )

6 Hughes Career Visited the U.S.S.R. in 1932 and produced a lot of radical writing up to the eve of World War II. The Great Depression brought an end to much of the African American literary activity. In 1937, Hughes worked as a news correspondent for the Baltimore Afro- American and covered the Spanish Civil War in Madrid. By the late 1930s, Hughes began writing dramas and screenplays as well as started writing an autobiography.

7 Hughes Career In 1943, he invented Jesse B. Semple, a folksy streetwise character whose prose monologues on race were eventually collected into four volumes of literature. He also created Alberta K. Johnson, Semples female equivalent, in his series of Madam poems. Hughes published a variety of anthologies for children and adults: First Book of Negroes (1952) The First Book of Jazz (1955) The Book of Negro Folklore (1958) In 1953, Hughes was called to testify before Senator Joseph McCarthys committee for his activities during the 1930s; the FBI listed him as a security risk until 1959.

8 A Style All His Own Hughes modeled his stanza forms on the improvisatory rhythms of jazz music and adapted the vocabulary of everyday black speech to poetry. Focus of his work was on modern, urban black life. Acknowledged the influence of white American poets such as Walt Whitman and Carl Sandburg. Hughes did not confuse his pride in African American culture with complacency toward the material deprivations of black life in the United States.

10 I didn't think about being a writer ever. I thought I might like to be a doctor, you know, or else a streetcar conductor, is what I most wanted to be, because at that time you had a belt line, I think, that went all around town.... That was a sort of a major pleasure ride for me for a nickel in those days. You know, I thought I'd like to drive a streetcar or be a conductor on a streetcar the rest of my life. -Langston Hughes 1965 Years later, Hughes would reply: American Heartbreak I am the American heartbreak- Rock on which Freedom Stumps its toe- The great mistake That Jamestown Made long ago. Hughes biographer Milton Meltzer remarked that when Hughes was living with his grandmother, the book he treasured most was W. E. B. DuBois's The Souls of Black Folk. Curiously, Langston did not mention this fact in either of his autobiographies. Yet Meltzer wrote that Mary Langston frequently read to her grandson the first lines from chapter 2 of that book: "The problem of the twentieth century is the problem of the colorline,-the relation of the darker to the lighter races of men in Asia and Africa, in America and the islands of the sea." Meltzer further stated, "Again and again Mary Langston read those words."(116) And then-to the boy who was separated from both parents, who was living in bitter poverty, who feared that the "white mortgage man" might take away his only home, who at least once ran away from his strict grandmother, and who was regarded by white school systems and society alike as a social liability-then Mary Langston would ask him, "How does it feel to be a problem?"(117) Cross My old man's a white old man and my old mother's black. If ever I cursed my white old man I take my curses back. If ever I cursed my black old mother and wished she were in hell, I'm sorry for that evil wish and now I wish her well. My old man died in a fine big house. My ma died in a shack. I wonder where I'm gonna die, being neither white nor black Langston Hughes Speaking of Rivers November 11, 2008 Presented By: Thomas Carli 1902 - 1967 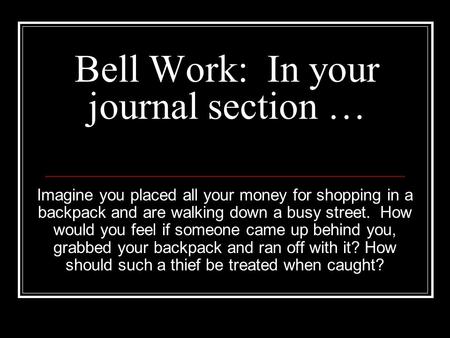 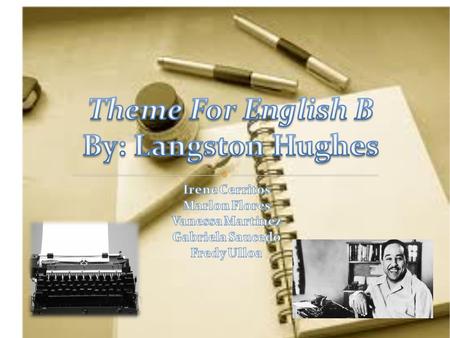 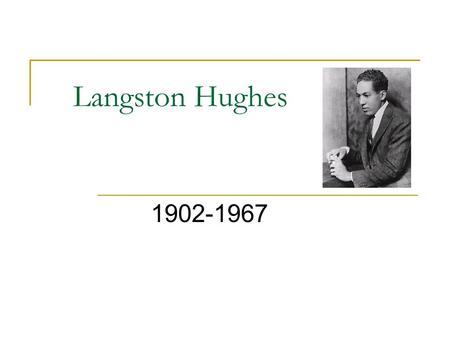