1 Langston Hughes and the Harlem Renaissance

2 Harlem Renaissance, first  When you hear the word Harlem, what sort of things do you think of? (where is it? What connotations/stereotypes?)  What about Renaissance ?

3 Harlem Renaissance, origins  In the 1920’s in New York, there was this wonderful coming together of African American poets, writers, artists, and musicians that was centered in Harlem, and Langston Hughes was one of the major writers involved.  You’ll hopefully get a more thorough background on this when you do some poetry in your American lit and history classes, but these are some basics you should know for context.

4 Harlem Renaissance  It began in Northern Manhatten, in Harlem New York  Black writers, many of whom came from the South and other parts of the world like Jamaica came there

12  Although he is most known for his poetry, and is extremely prolific (that means who wrote LOTS of poems), he also wrote plays, fiction, screenplays, and biographies

13 Education  He moved to New York city to attend Columbia University, where he went for a year, but then left school to travel the world as a merchant seaman.

14 He traveled to Europe, especially France--where he lived for a time—and to Africa to gather inspiration, life stories, and observations. The Africa trip enabled him to get back to his cultural and historical roots, and inspired his poem, “The Negro Speaks of Rivers.”

15  Upon his return from these travels, he had his first volume of poetry published in 1926  Many of his poems are about his pride in his heritage

16 He provides a link for the black community to their cultural roots, and the promise of a better future. 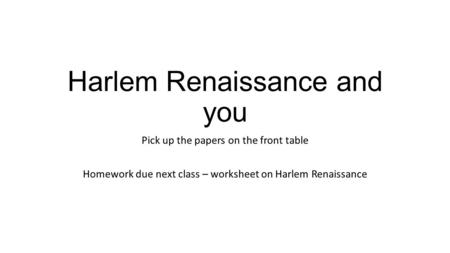