2 HOW ARE OUTFIT ORGANIZED?

6 The 3 C’s in Senior Scouting The CREW

7 Crew Leader  The head and spokesman of the Crew.  He leads the Crew not only in the following its own interests but also in contributing to the success of the entire Outfit.  He represents the Crew in the Outfit Council.

9 Crew Scribe  Records and keeps the minutes of Crew meetings and the Crew log book.  He handles all the paper works of the Crew to include the Advancement, attendance, and participation records of all the Crew members.

10 Crew Treasurer  Responsible for the collection and handling of all Crew finances such as dues and other funds.  As such, he keeps a record of all monetary transactions of the Crew.

11 Crew Quartermaster  Responsible for the storage and maintenance of all Crew equipment, materials, and supplies.  He inspects these regularly and makes sure everything is accounted for and in good condition.  He takes charge of realizing them to Crew members and makes sure all are returned clean and in order immediately after use.

12 Crew Cheer Leader  He is the spirit builder of the Crew. He leads the Crew in cheering, in singing, acts as master of ceremonies during socials and in boosting the morale and enthusiasm of the members.  He creates Crew Yells, stunts, tricks, songs and teaches them to the whole Crew.

13 Crew Hike Leader  He is the outdoor specialist of the Crew.  He leads in the planning and in the implementation of all Crew outdoor activities and projects undertaken and/ or participated in by the Crew such as adventure hikes, expeditions, camps, rallies, tournaments, picnics, river explorations, air-shows etc.

14 Crew Grubmaster  In-charge of food preparation, and other dietary requirement of the Crew.  He plans the menu, does the marketing, cooks the food, and supervises the mess.

15 FEATURES THAT DEVELOP THE CREW SPIRIT

16 Crew Name  Represents the characteristics, the values, and the standard of the crew names  It should be related to the area of interest or specialization  as forest Rangers, Trailblazers, Protectors, or Lion Kings for the Land Scouts;  Screaming Eagles, Sky Guards, Air Explores, or Stilt Bombers for Air Scouts;  Sea Tigers, Flying fish, Mermen, Roaring Sea for Sea Scouts

17 Crew Flag  This should be symbolic of everything that the Crew stands for.  The style and color of the flag is dependent on the desire and creativity of the Crew.

18 Crew Song  This is the anthem of the Crew.  It may be hymn or a march.  What is important is it must be representative of the Crew and everything that the crew stands for its traditions…its culture.

19 Crew Yell A shout that identifies the Crew and ignites the excitement of all its members. Crew Totem This is representative of the Crew name and it placed on the top of the pole of the Crew Flag.

20 Crew Call  An oral call to identify its members.  When sounded all members should go to where the call is made. Crew Signature  A secret signature known only to the members.  Used for identification in their communication.

21 Crew Medallion  Used by the crew members and is representative of the Crew and what it stands for.  The shape of the medallion is particular to the Crew.

22 Crew Corner  A place where the Crew places and puts on display their projects and their achievement awards and other recognition.  This is also where the Crew gathers and conduct their meetings.

23 Crew Code  A statement of beliefs and values, which sets the standards of behavior of all Crew members.  It is where the Crew traditions and culture is based.  It is their Vision and Mission statement, which, though anchored on the Senior Scouts Ideals, is unique to the Crew.

24 The 3 C’s in Senior Scouting The COUNCIL

25 THE OUTFIT COUNCIL  Composed of all elected Crew Leaders, the Senior Crew Leader, Outfit Secretary, Outfit Treasurer, and the Outfit Quartermaster.  It also serves as an Outfit Board of Review and as an Outfit Court of Honor.

26 The 3 C’s in Senior Scouting The COMMITTEES

29 Vocational Committee Takes care of hobbies and crafts, vocational explorations of business, professions, and trades, factory and plant visits and tours, attending and/ or organizing seminars, conferences, workshops on different crafts and professions.

30 Social Committee Takes care of social gatherings, mixed and stag, informal or formal, and to include all other relationship and cultural activities and projects. 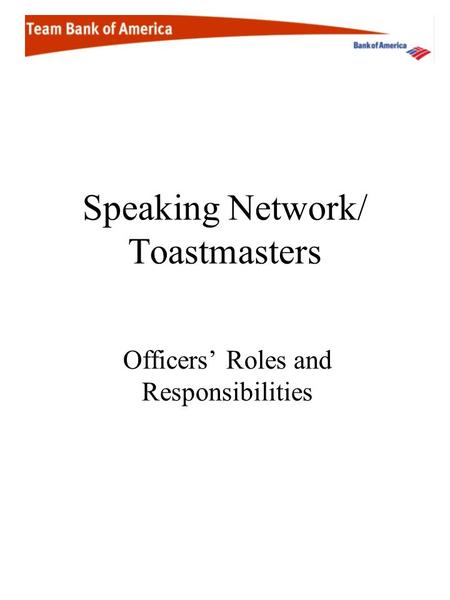 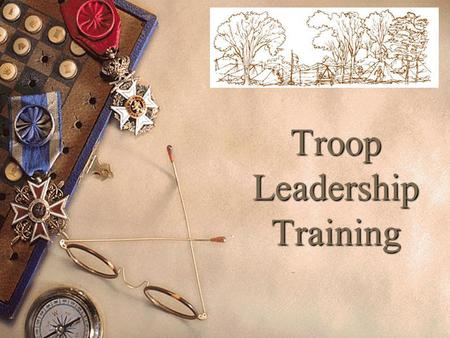 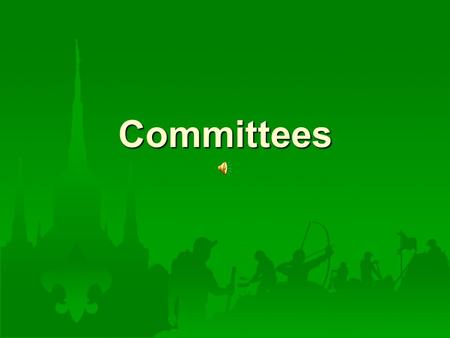 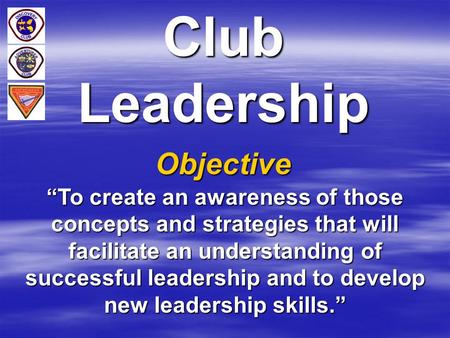 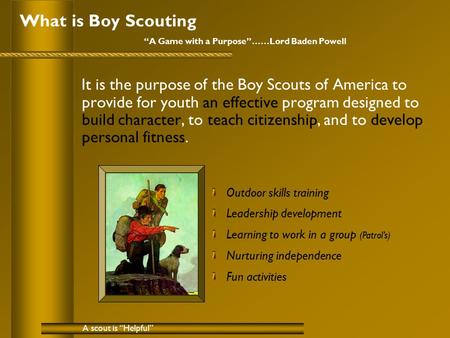 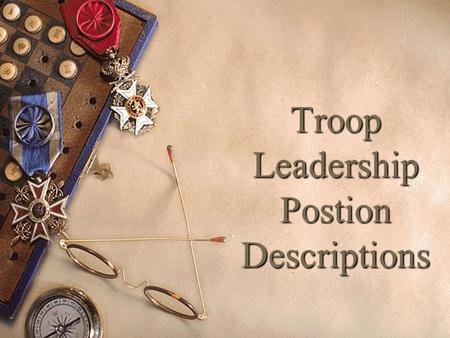 Troop Leadership Postion Descriptions. Learning Leadership (Know) – what do I need to KNOW for my position? How to Fulfill Your Role (Be) – what kind. 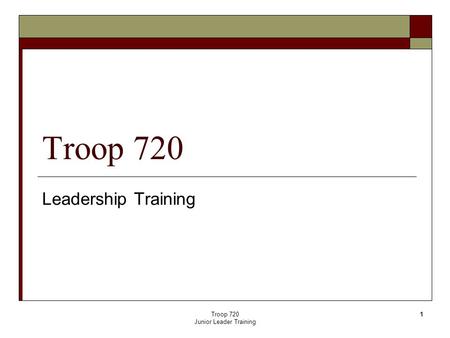 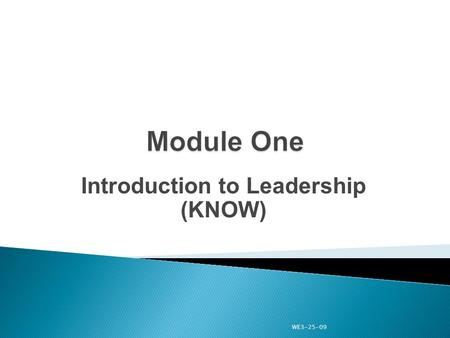 Introduction to Leadership (KNOW) WE “KNOW” will provide the information that you need to successfully fill your leadership position. The Know. 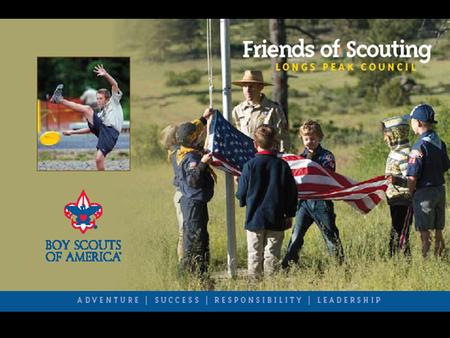 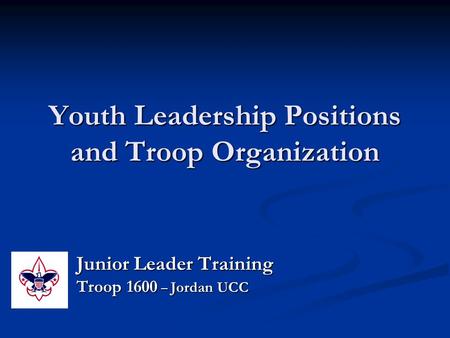 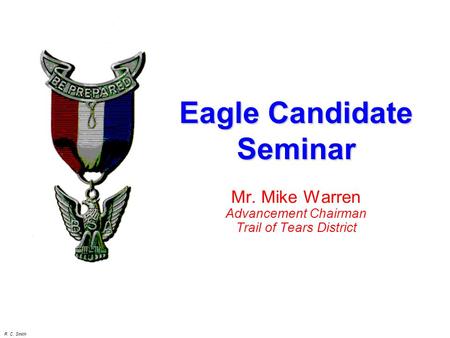 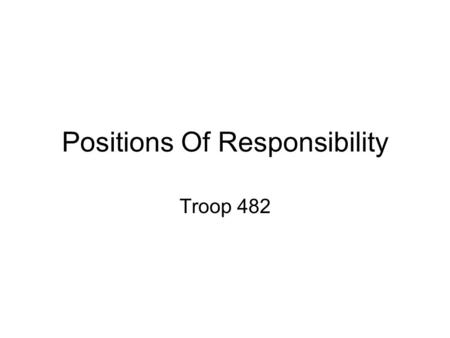 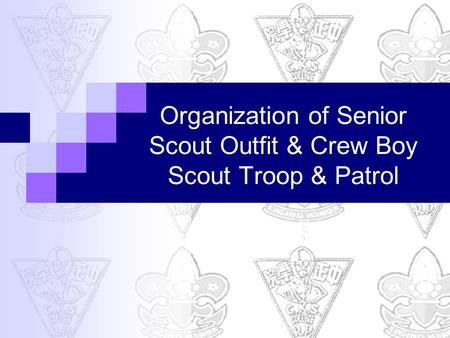 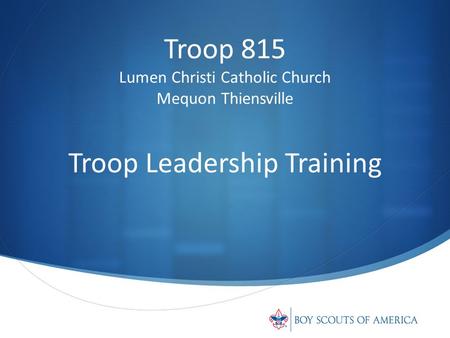 Training boy leaders to run their troop is the Scoutmaster's most important job. 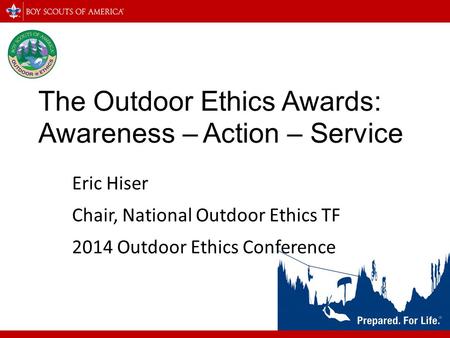 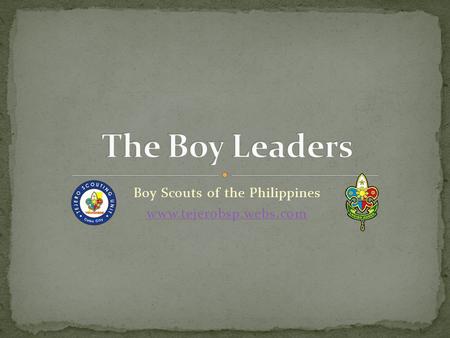 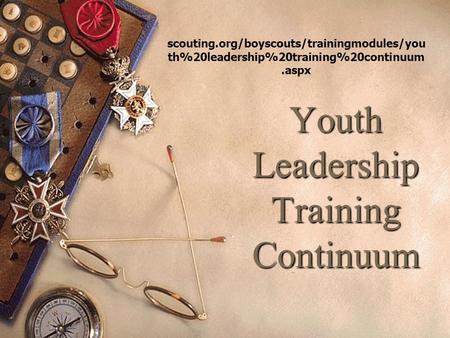 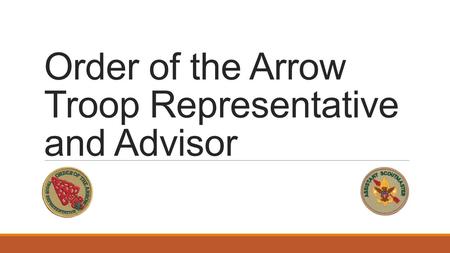 Order of the Arrow Troop Representative and Advisor. 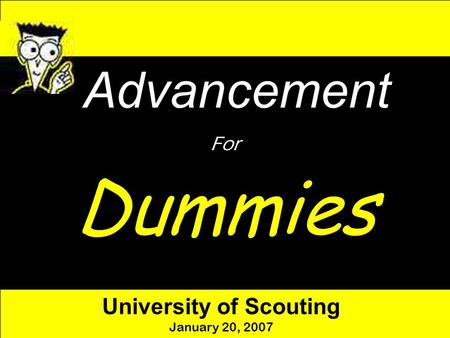 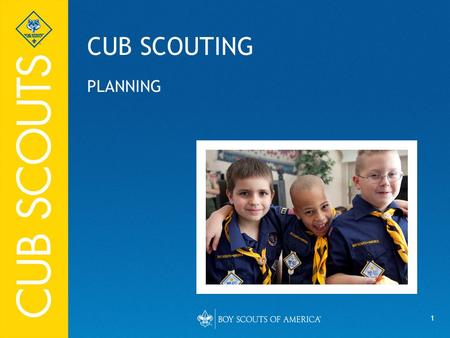