3 Raised expectations….. The programme of study for English in the revised National Curriculum places great importance on pupils’ spelling, punctuation and grammar skills. Grammar has always been taught as part of the National Curriculum, but now there are key concepts linked to year groups – learning points the children should have achieved by the end of that year in school. Pupils in Year 6 have to take a SPAG (Spelling, Punctuation and Grammar) test as part of their statutory assessments (SATS) in May.

4 Raised expectations….. Pupils are expected to learn grammatical terminology (e.g. adverb, subordinate clause) and use it in both discussion and practice. Some changes have been made to terms older pupils may have been taught lower down the school. For example, speech marks are now more commonly referred to as inverted commas and connectives are now known as conjunctions.

5 Teaching Grammar at St John Fisher
In Key Stage 2, we use the Read Write Inc Literacy and Language programme as the foundation for our English curriculum. This has been written and developed to meet the requirements of the revised National Curriculum. The teaching of grammar is an integral part of the programme, with pupils covering grammar objectives for their year group through their units of work. However, separate grammar lessons will also take place in order to consolidate key learning points.

6 Year 3……… When pupils enter Year 3, it is expected that they will be able to: -Consistently use the past and present tense throughout a piece of writing -Use of the progressive form of verbs in the present and past tense to mark actions in progress [for example, she is drumming, he was shouting]

7 Year 3…… Use capital letters, full stops, question marks and exclamation marks to demarcate sentences Use commas to separate items in a list Use apostrophes to mark where letters are missing in spelling (e.g. can’t) and to mark singular possession in nouns (for example, the girl’s name)

9 Year 3…. Been introduced to subordination (using when, if, that, because) and co-ordination (using or, and, but) Use expanded noun phrases for description and specification [for example, the blue butterfly, plain flour, the man in the moon] Identify the functions of sentences: statement, question, exclamation or command

10 New learning in Year 3….. -Obviously, some time in Year 3 will be spent consolidating these concepts from Year 2. -Our current Year 3 class were the last class to move onto the revised National Curriculum programme of study, so will have gaps to be filled as they progress through Key Stage 2.

12 New learning in Year 3…. Begin to use paragraphs as a way to group related material Use headings and sub-headings to aid presentation Use of the present perfect form of verbs instead of the simple past [for example, He has gone out to play contrasted with He went out to play]

13 New learning in Year 3… Begin to use inverted commas (speech marks) to punctuate direct speech, e.g. “Please go and tidy your room,” begged Mum. Form nouns using a range of prefixes [for example super–, anti–, auto–] - covered through the Read Write Inc Spelling programme e.g. supermarket, antibiotic, automatic Use the determiners a or an according to whether the next word begins with a consonant or a vowel [for example, a rock, an open box]

14 New learning in Year 3…. Develop word families based on common words, showing how words are related in form and meaning [for example, solve, solution, solver, dissolve, insoluble] Identify the main clause and the subordinate clause in a sentence: Due to the strong winds, many flights had to be cancelled. Subordinate clause Main clause

15 New learning in Year 3…. -Use a range of prefixes and suffixes (see National Curriculum spelling appendix)

21 Appropriate choice of pronoun or noun within and across sentences to aid cohesion and avoid repetition In simple terms, this means not repeating a person’s or object’s name many times when writing. Bob went to the shop. Bob bought an apple then Bob went home to eat his apple. Instead we say: Bob went to the shop. He bought an apple then he went home to eat it.

25 Converting nouns or adjectives into verbs using suffixes
Here the children have to add a suffix to convert the word into a verb. For example: priority – prioritise intense – intensify hesitant- hesitate

27 Relative clauses Relative clauses beginning with who, which, where, when, whose or that. For example:- The man, who was the tallest, picked the book off the shelf. Where there is no alternative, always choose the safest route.

28 Modal Verbs For example:- might, should, will, must
I should make sure my homework is in on time. This evening, I can go to the cinema because I have finished all my homework.

29 Devices to build cohesion
This means to join ideas within and between paragraphs. For example:- then, after that, this, at first. At first, I did my maths homework. After that, I was able to watch TV.

30 Linking ideas using adverbials
Time- later Place- nearby Number- secondly For example:- Later that day… …he had seen her before In the woods nearby…

31 Brackets, dashes or commas
The woman (with the red coat) was walking down the road. She was happy to receive the invitation- we think so, anyway – and thanked the family for considering her. Put all the toys, including Samira’s games, in that cupboard.

32 New Curriculum Expectations- Year 6
Formal and informal speech Use of the passive voice Use of subjunctive forms Linking ideas user a wider range of cohesive devices Use of the semi-colon, colon and dash Use of hyphens to avoid ambiguity

33 Formal and informal speech
Using appropriate vocabulary for formal speech and writing For example:- Find out- discover Ask for- request Go in - enter

36 Use of subjunctive forms
The difference between structures typical of informal speech, formal speech and writing. Use of subjunctive forms – how the verb appears in a sentence. Subjunctives make language appear more formal. For example:- If I was rich, I’d buy a Ferrari. If I were rich , I’d buy a Ferrari. Now that I know, I wish I hadn’t gone. If ever I had know, I would never have gone.

37 Cohesive devices Linking ideas across paragraphs using repetition of a word or phrase Use of adverbials such as on the other hand, in contrast or as a consequence Ellipsis Layout devices for example headings, sub- headings, columns, bullets or tables

38 Cohesive devices Linking ideas across paragraphs using repetition of a word or phrase Use of adverbials such as on the other hand, in contrast or as a consequence Ellipsis Layout devices for example headings, sub- headings, columns, bullets or tables

39 Punctuation Semi-colon
It was a clear cold night; the moon and stars could be seen easily. Colon to introduce a list These are the items in my pencil case: a ruler, a pen and a pencil. Hyphens to avoid ambiguity Man eating shark versus man-eating shark, or recover versus re-cover 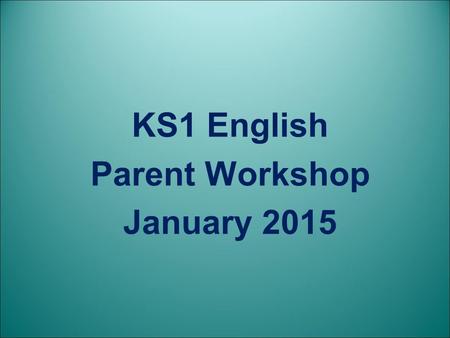 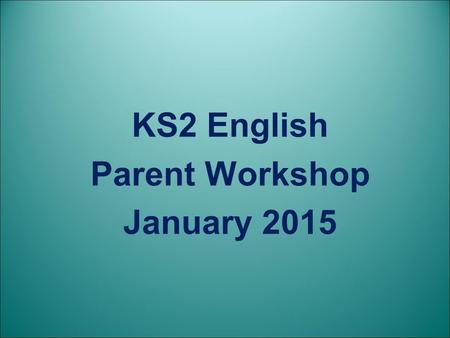 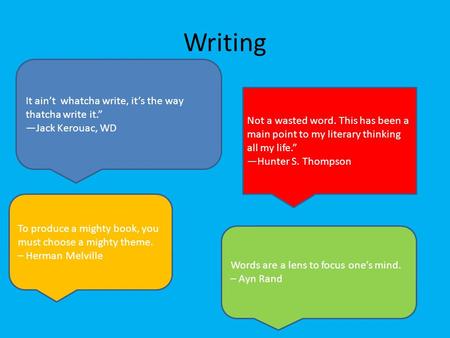 Writing It ain’t whatcha write, it’s the way thatcha write it.” —Jack Kerouac, WD Not a wasted word. This has been a main point to my literary thinking. 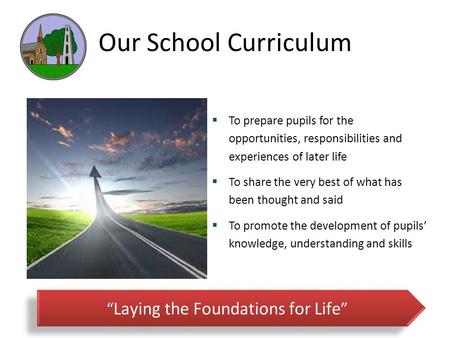 Our School Curriculum  To prepare pupils for the opportunities, responsibilities and experiences of later life  To share the very best of what has been. 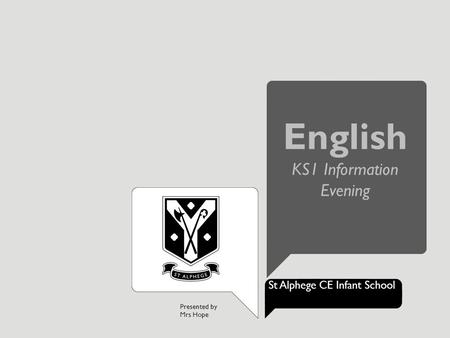 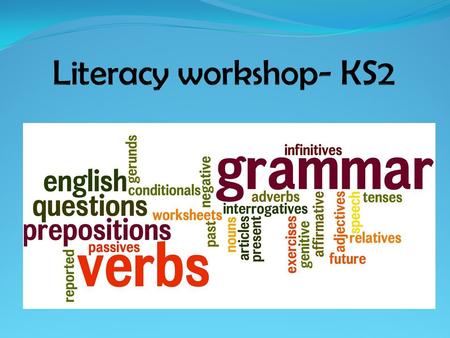 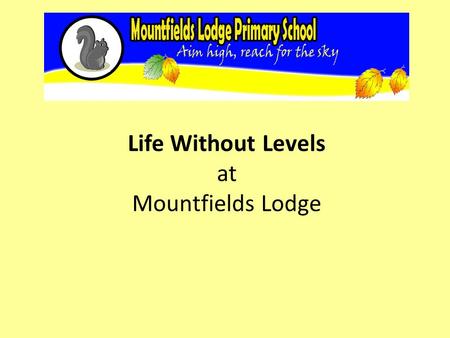 Life Without Levels at Mountfields Lodge 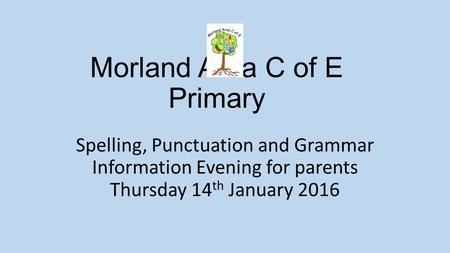 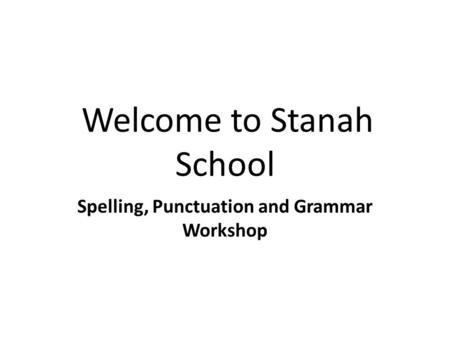 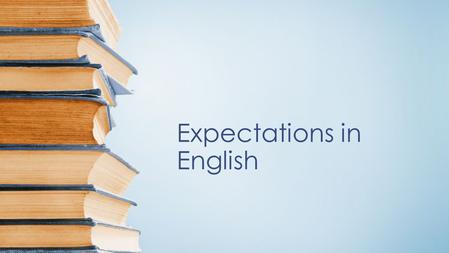 Expectations in English. All year groups have heightened expectations End of year 2 Punctuation- Use of capital letters, full stops, question marks, and. 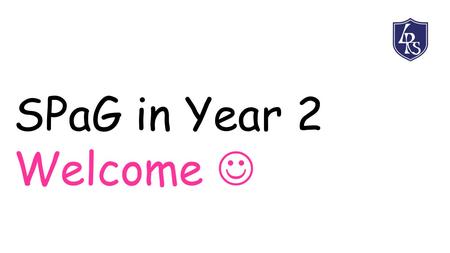 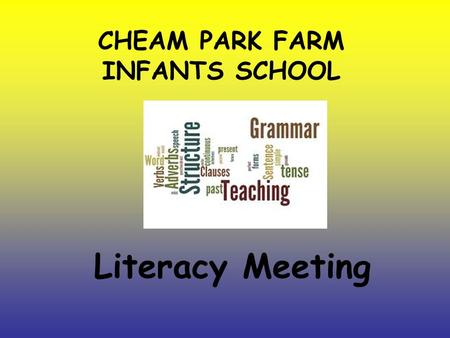 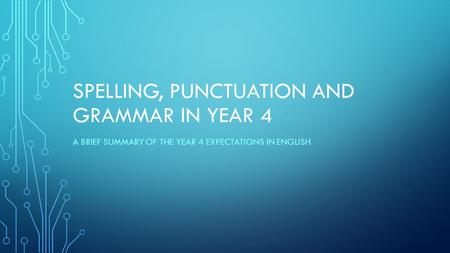 SPELLING, PUNCTUATION AND GRAMMAR IN YEAR 4 A BRIEF SUMMARY OF THE YEAR 4 EXPECTATIONS IN ENGLISH.

SPELLING, PUNCTUATION AND GRAMMAR IN YEAR 3 A BRIEF SUMMARY OF THE YEAR 3 EXPECTATIONS IN ENGLISH.

KS2 Parent Presentation February Aims Help you to understand the changes in the new curriculum in English and Maths. Provide you with a greater. 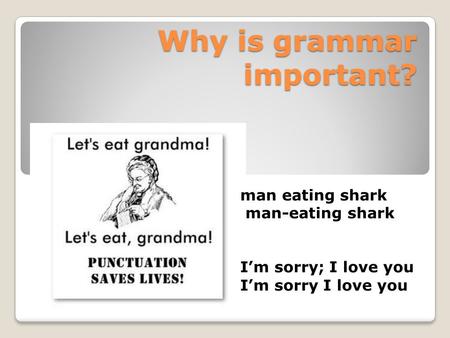 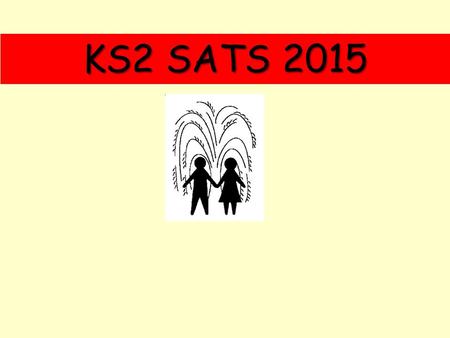 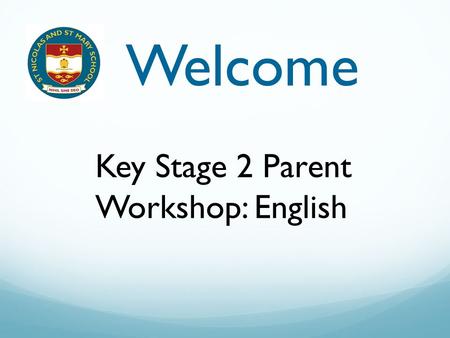 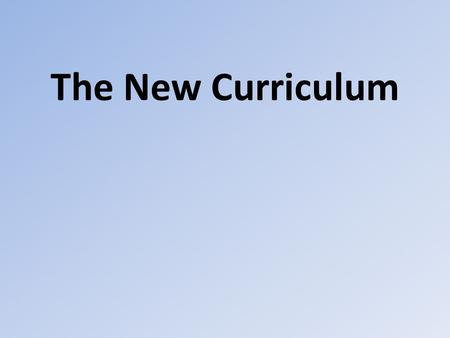 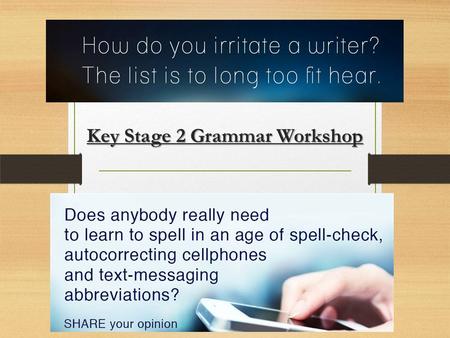