2 Background PFMA promulgated in 1999. Applies to Parliament and provincial legislatures “to the extent indicated” [s. 3(1)(d)]. Applicable provisions must be read so that “any controlling and supervisory functions” of National Treasury are performed by the Speaker and Chairperson, acting jointly, or, in the case of a provincial legislature, the Speaker of such legislature [s. 3(2)]. In addition, regulatory framework applicable to Parliament includes, Exchequer Act 66 of 1975 (s. 7, 14, 33, & 34), incorporated by reference in section 33 of the Powers and Privileges of Parliament Act 91 of 1963, which is kept in operation by section 31 of the Powers, Privileges and Immunities of Parliament and Provincial Legislatures Act 4 of 2004. In 2000 the Secretary to Parliament advises the Presiding Officers that such regulatory framework requires a review either with a separate Act or as amendment to the PFMA. Mandate is given to Portfolio Committee on Finance to draft a separate Bill. Local Government: Municipal Finance Management Act 56 of 2003 promulgated in 2003. Finalisation of draft Bill stood over for 3 rd Parliament. Draft Bill published in Government Gazette No. 28166, 28 October 2005. Portfolio Committee assisted in its consideration by Prof C Murray, Mr C Barberton and Mr P Benjamin up to 2 August 2006. Portfolio Committee reported to Assembly on 18 September 2008 – introduction. Bill passed by Assembly and referred to Council on 26 September 2008.

3 Principles of Bill Constitutional status of Parliament Separation of powers – see Ex parte Chairperson of the Constitutional Assembly: In re Certification of the Constitution of the RSA, 1996 1996 (4) SA 744 (CC) at par [106]; Houses control their own internal arrangements, proceedings and procedures – including control of finances - see sections 57 and 70 / provinces section 116; PFMA recognises this position – see s. 3(2) and similar to position under section 31 of Powers and Privileges of Parliament Act, 1963; and Legal opinion confirms this position and advises that section 216 of the Constitution must be read to mean that the treasury control in the case of Parliament and provincial legislatures is subject to the authority over finances. Compliance with the constitutional values of transparency, accountability, and effective financial management with reference to uniform expenditure classifications and uniform treasury norms and standards – see section 215: Format of budget - clause 16 (see especially clause 16(2)(h) referring to maintaining consistency with other organs of state); Format of financial statements – clause 56(1); and Uniformity with reference to audit committee and internal auditr unit (clauses 47(5) and 50(1)).

7 Chapter 4: Cash management and investment In accordance with policy that Executive Authority must prescribe Accounting Officer must establish systems and procedures Bank accounts Restrictions on borrowing Requisitioning of funds

16 Consultation Memorandum: Bill published for public comment in GG No 28166 on 28 October 2005. Auditor-General, National Treasury, Parliamentary Service. Amendment to PFMA – Minister of Finance consulted on clauses 23, 25 and 72 – as required by the PFMA [see s. 4 and 13(3)]. 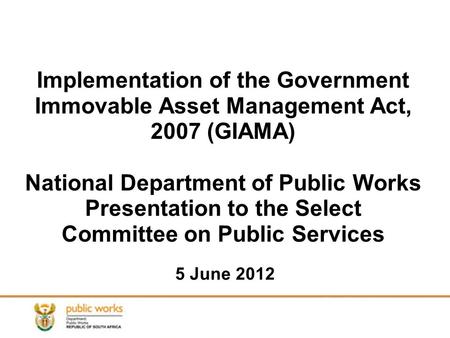 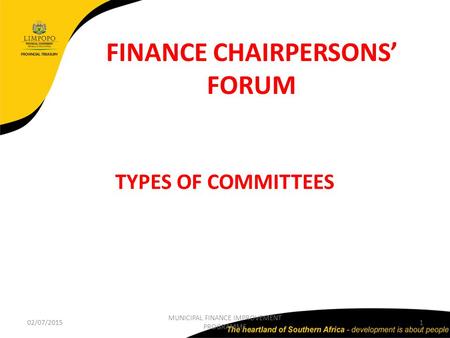 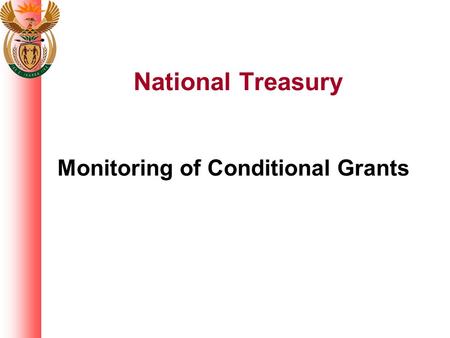 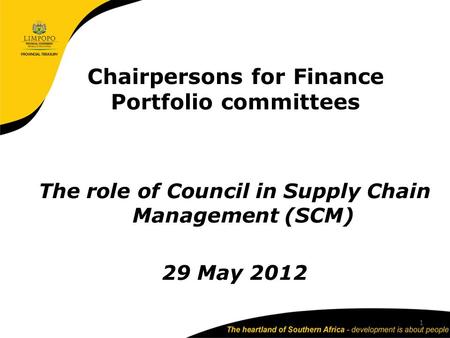 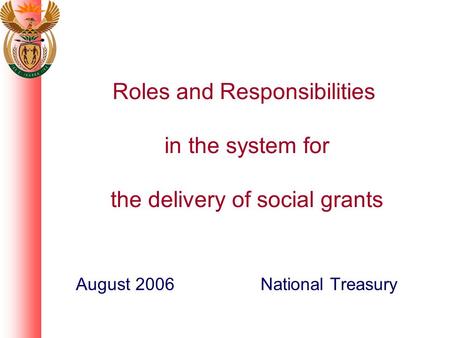 Roles and Responsibilities in the system for the delivery of social grants August 2006 National Treasury. 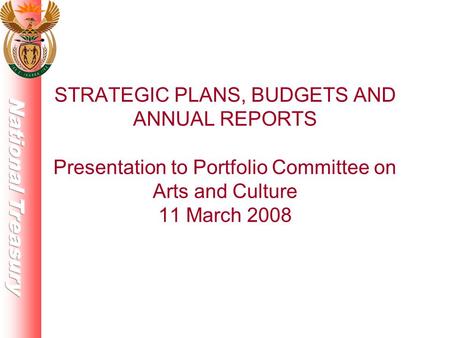 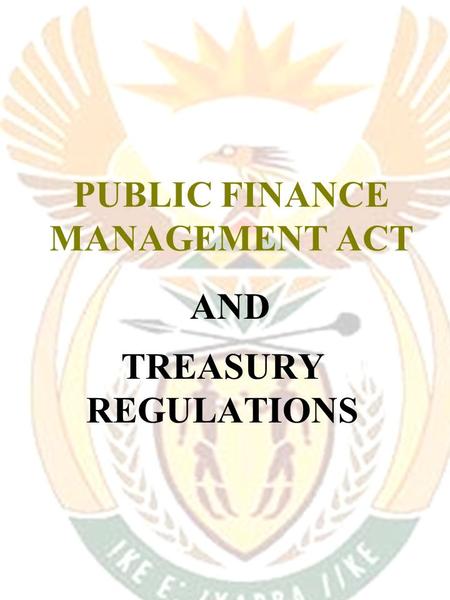 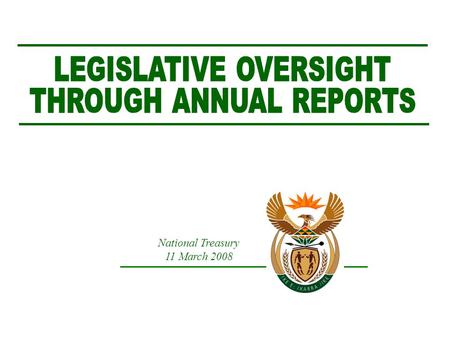 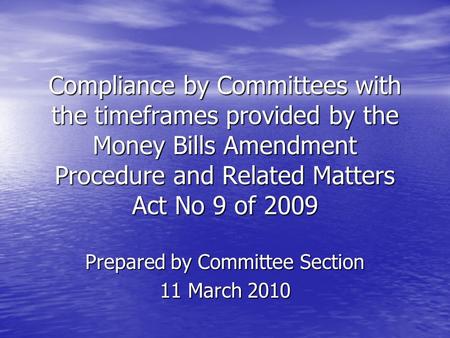 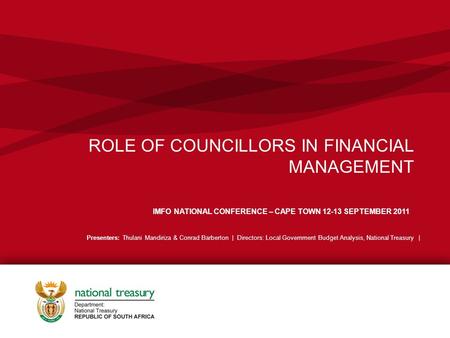 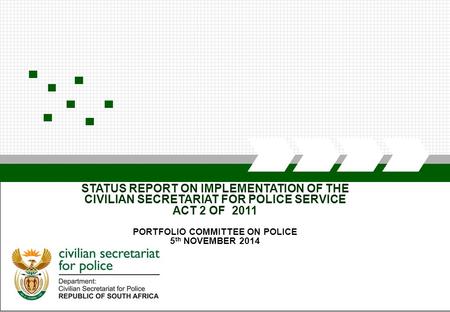 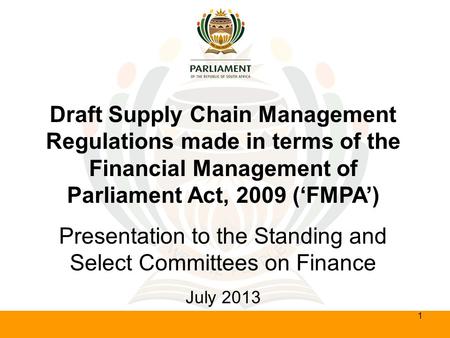 Draft Supply Chain Management Regulations made in terms of the Financial Management of Parliament Act, 2009 (‘FMPA’) Presentation to the Standing and Select. 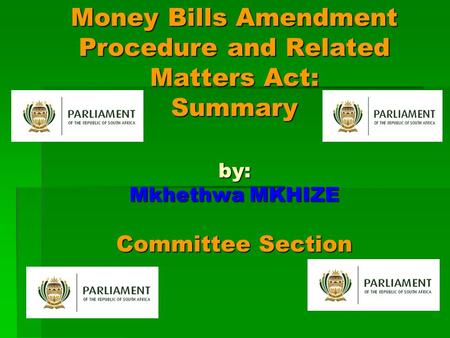 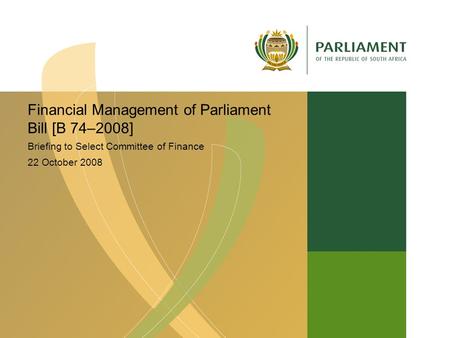 Financial Management of Parliament Bill [B 74–2008] Briefing to Select Committee of Finance 22 October 2008. 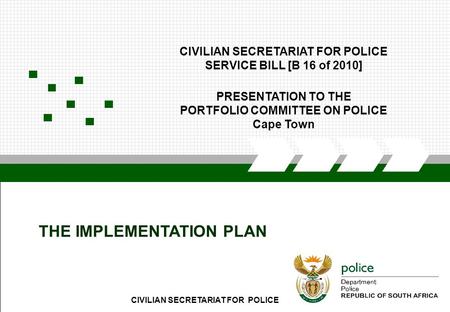 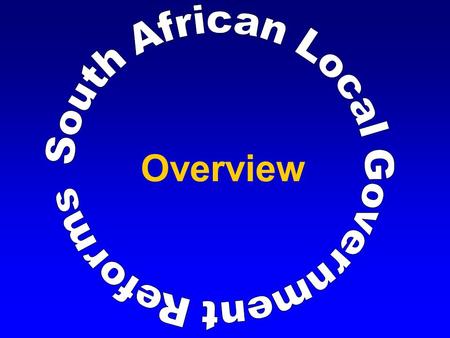 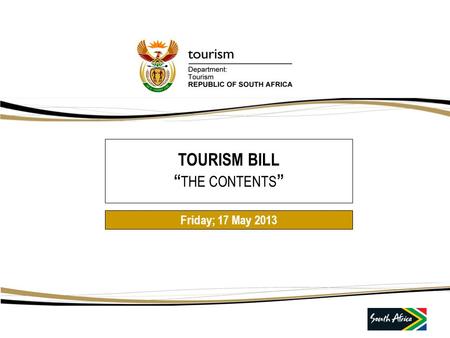 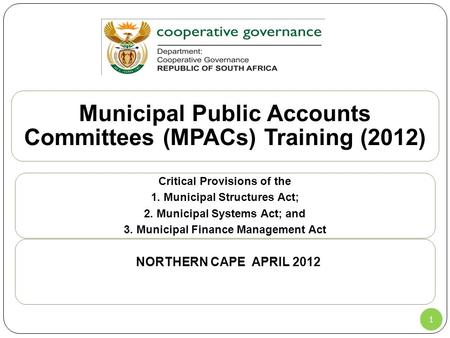 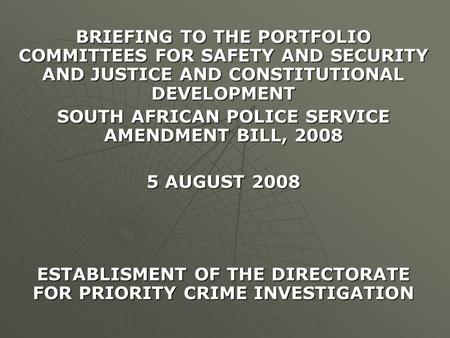 BRIEFING TO THE PORTFOLIO COMMITTEES FOR SAFETY AND SECURITY AND JUSTICE AND CONSTITUTIONAL DEVELOPMENT SOUTH AFRICAN POLICE SERVICE AMENDMENT BILL, 2008. 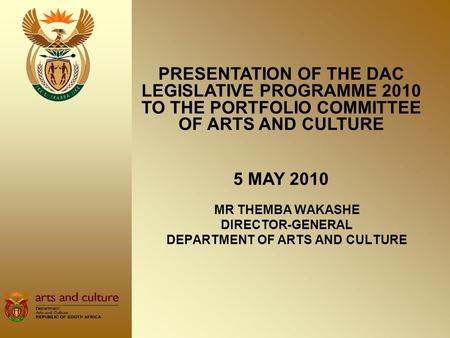 MR THEMBA WAKASHE DIRECTOR-GENERAL DEPARTMENT OF ARTS AND CULTURE PRESENTATION OF THE DAC LEGISLATIVE PROGRAMME 2010 TO THE PORTFOLIO COMMITTEE OF ARTS.