8 8 Thread Definition  The user-level model, runs on top of the existing operating system and is transparent to it.  Library functions and system calls made within the thread are wrapped in special code to allow for thread run-time management.  Threads implemented in this manner have low system overhead and are easily extensible.  More importantly, user-level threads are designed to share resources with other threads within their process space when running on a single processor. THREADS

10 10 Creating a Thread  Every process contains at least one main or initial thread of control created by the operating system when the process begins to execute.  The library function pthread_create is used to add a new thread of control to the current process. The new thread executes with the other threads within the process and, if directed, with other threads of control in other processes. ( Table 11.1.) THREADS

12 12 Creating a Thread  Once a thread is created, it has its own set of attributes and an execution stack.  It inherits its signal mask (which it then can alter) and scheduling priority from the calling program (the initiating thread).  It does not inherit any pending signals. If needed, a thread can allocate its own storage for thread-specific data. THREADS

14 14 Exiting a Thread  The pthread_exit library call terminates a thread in much the same manner as a call to exit terminates a process. (Table 11.2.) THREADS

16 16 Basic Thread Management  Once a thread is created, we can direct the calling process to wait until the thread is finished (it calls pthread_exit or is cancelled). This is accomplished with a call to the pthread_join library function. (Table 11.3.) THREADS

18 18 Basic Thread Management  There are some caveats associated with joining threads.  A thread should be waited upon (joined) by only one other thread.  The thread issuing the join does not need to be the initiating thread.  If multiple threads wait for the same thread to complete, only one will receive the correct status information.  The joins in competing threads will return an error.  Should the thread initiating the join be canceled, the waited upon thread can be joined by another thread. THREADS

19 19 Basic Thread Management  If the targeted thread has terminated prior to the issuing of the call to pthread_join, the call will return immediately and will not block.  A non detached thread (which is the default) that is not joined will not release its resources when the thread finishes and will only release its resources when its creating process terminates.  Such threads can be the source of memory leaks. THREADS

20 20 Basic Thread Management  The process of joining a thread is somewhat analogous to a process waiting on a forked child process.  Unlike a forked child process, a thread can become detached with a single library call.  When a detached thread finishes, its resources are automatically returned to the system.  The pthread_detach library call is used to dynamically detach a joinable thread. (Table 11.4) THREADS

22 22 Basic Thread Management  Once a thread is detached, other threads can no longer synchronize their activities based on its termination.  Exp 6.1: The program for creating and joining threads. Exp 6.1 THREADS

23 23 Thread Attributes  In a POSIX implementation, if we want to generate a thread that does not have the default attributes (obtained by setting the second parameter of the pthread_create call to NULL), an attribute object is used.  To use an attribute object, it must first be initialized. This is accomplished using the library call pthread_attr_init. (Table 11.5) THREADS

25 25 Thread Attributes  If the call is successful, it returns a 0 and initializes the referenced attribute object with the default value for each attribute. (Table 11.6) THREADS

26 26 Thread Attributes CommentsDefaultAttribute A non detached thread that can be joined by other threads. The thread's resources are not freed until a call is made to pthread_join or the calling process exits. PTHREAD_CREATE_JOINABL E detachstate Indicates whether or not scheduling attributes are inherited from parent thread or set explicitly by the attribute object. PTHREAD_EXPLICIT_SCHEDinheritsched Scheduling parameters (priority).0schedparam Scheduling is determined by the system (most often some sort of timesharing). Note the missing PTHREAD_prefix. SCHED_OTHERschedpolicy Scope of scheduling contention—with all threads in same process or all processes in the system. PTHREAD_SCOPE_SYSTEscope Table 11.6. Thread Attributes and Default Settings. THREADS

27 27 Thread Attributes  Once initialized, individual attribute values can be modified.  The newly created thread will have the specified attributes.  The attribute object is independent of the thread, and changes to the attribute object after a thread has been created are not reflected in existing threads.  Once established, a thread attribute object can be used in the generation of multiple threads. THREADS

34 34 Scheduling Threads  Understanding the Linux Kernel provides an excellent in-depth presentation of Linux scheduling.  Essentially, scheduling is used to determine which ready-to-run task the CPU will execute next.  A good operating system will reveal a variety of scheduling policies, some of the more common of which are: THREADS

36 36 Scheduling Threads  Furthermore, many of these strategies can be implemented as  Nonpreemptive Once the task begins, it goes to completion  Preemptive The task can be removed by a task of a higher priority  In current operating systems preemption is the norm.  Keep in mind, processes can be in user mode or kernel mode. THREADS

37 37 Scheduling Threads  Traditionally, a process running on a single processor system is nonpreemptive when it is in kernel mode.  Similar to processes, Threads can be in ready, running and blocked states.  Scheduling of a POSIX thread in Linux is determined by priority and scheduling policy parameters.  sched_get_priority_max  sched_get_priority_min can be used to determine the actual priority limits for a specific scheduling policy. THREADS

38 38 Scheduling Threads  Three scheduling policies for threads: 1.SCHED_OTHER: (system default) It is a time sharing policy in which all threads with same static priority 0 receives a time slice. 2.SCHED_FIFO: First in first out 3.SCHED_RR: Round robin  A scheduling policy and priority of a thread that already exists can be set with the pthread_setschedparam library function. (Table 11.8.)  Exp 6.2 : See the program for scheduling the threads Exp 6.2 THREADS

40 40 Scheduling Threads  The first argument of pthread_setschedparam is a valid thread ID.  The second argument should be one of the following defined constants:  SCHED_OTHER  SCHED_FIFO  SCHED_RR  The third argument for this call is a reference to a sched_param structure. THREADS

41 41 Scheduling Threads  If successful, the pthread_setschedparam library returns a 0; otherwise, it returns one of the following values:  EPERM (1), the calling process does not have superuser privileges;  ESRCH (3), the specified thread does not exist;  EFAULT (14), param references an illegal address;  EINVAL (22), invalid policy or param value or priority value is inconsistent with scheduling policy. THREADS 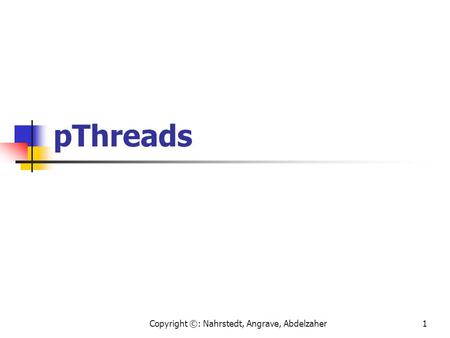 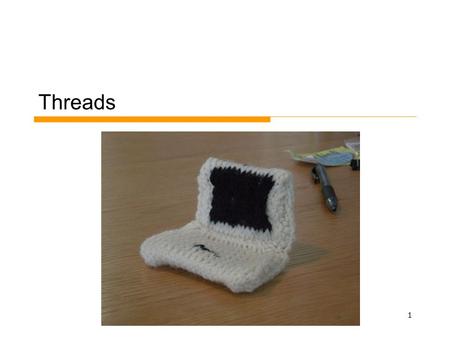 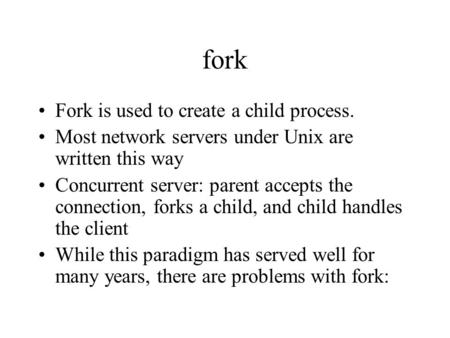 Fork Fork is used to create a child process. Most network servers under Unix are written this way Concurrent server: parent accepts the connection, forks. 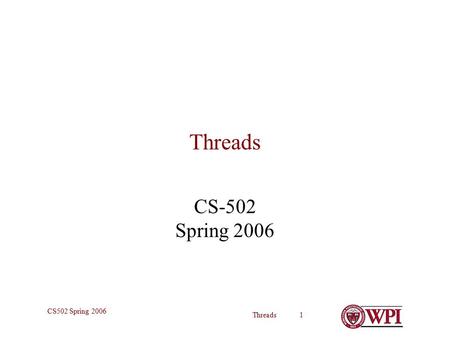 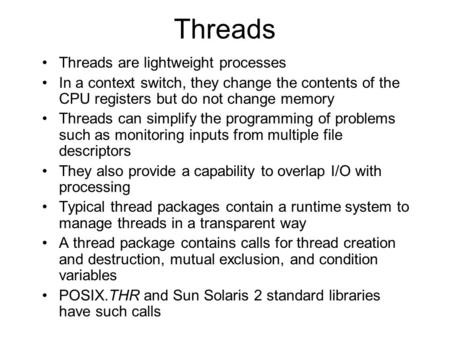 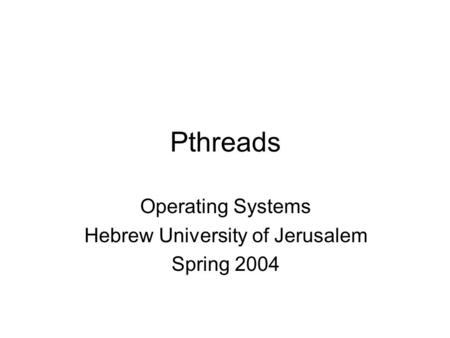 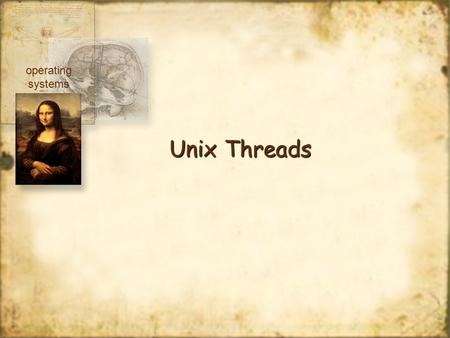 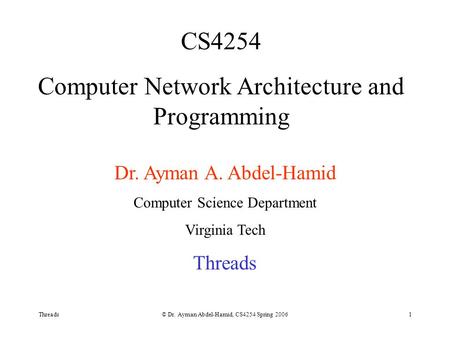 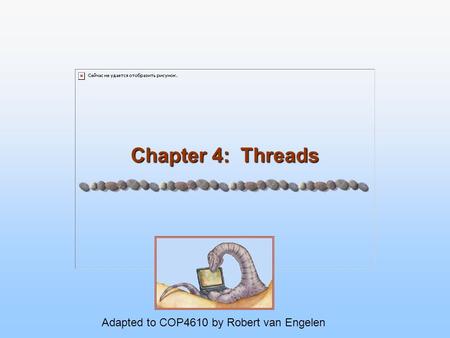 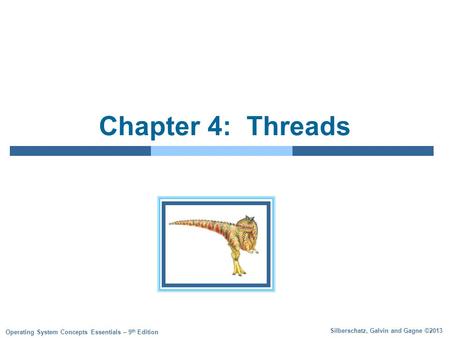 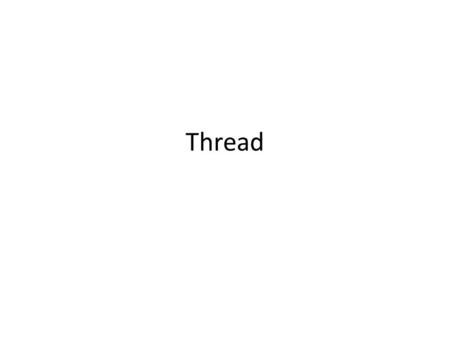 Thread. A basic unit of CPU utilization. It comprises a thread ID, a program counter, a register set, and a stack. It is a single sequential flow of control. 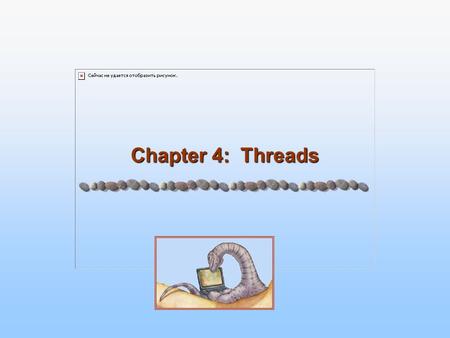 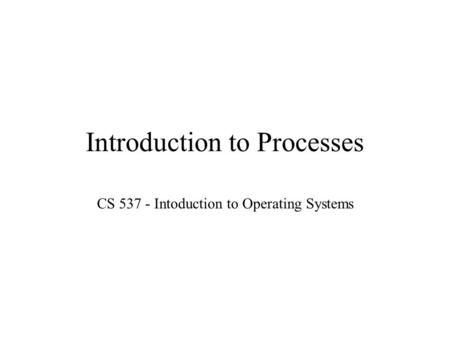 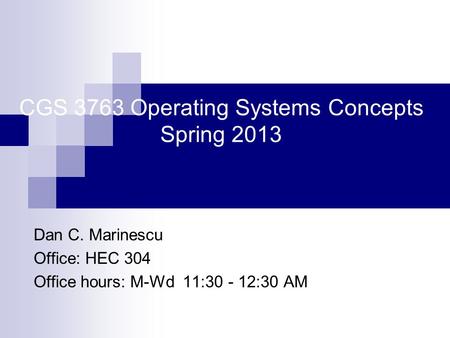 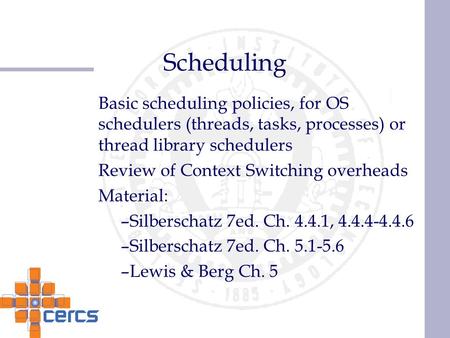 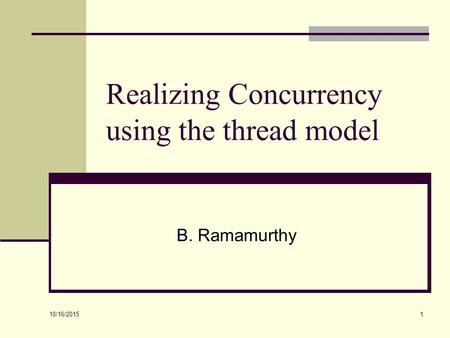 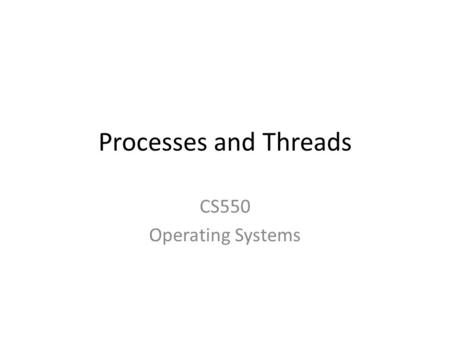 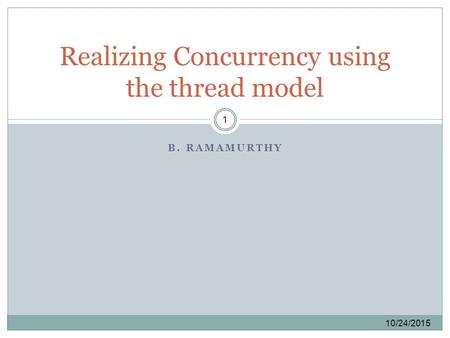 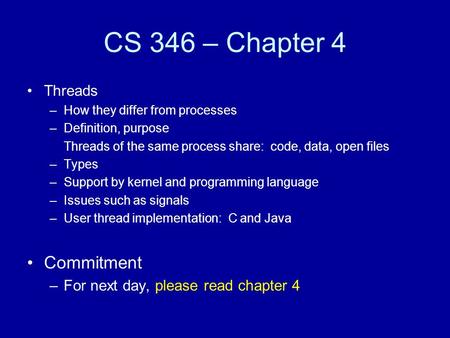