6 Holy Grail In Christian mythology the cup used by Jesus during the last supper. In Arthurian legends the hero must prove himself worthy to be in its presence

7 “Siege Perilous” Special seat at Round Table for the knight destined to return with the Holy Grail Sir Galahad- only knight who sits in it. Fatal to anyone else who sat in it.

8 Excalibur (Cut Stele) King Arthur's mythical sword
Given by the Lady of the Lake Sword in the stone could only drawn by real king.

18 Morgan le Fay “Fay” is French for “fairy” King Arthur’s half sister
Studied the evil arts under Merlin Conjured the Green Knight to test the knights of the round table Seduced many knights (in one version, even King Arthur—resulting in son, Mordred)

20 The Siege of Benwick Sir Gawain and Sir Lancelot battle
Sir Gawain becomes stronger for 3 hours, until noon—weakens Sir Lancelot shows forbearance and does not kill him

21 Meanwhile:The Siege of Benwick
Mordred falsely proclaimed himself the King of England Incestuously claimed Guinevere as wife. Guinevere escaped to the Tower of London

23 The Day of Destiny Mordred meets Arthur at Dover, they discuss a delay
They make a truce until a knight draws his sword (to kill an adder) The opponents see the glint of his sword and the battle begins.

24 The Day of Destiny As predicted, almost all die in the epic battle
Arthur kills Mordred But Arthur is mortally wounded and is brought by Bedivere to the nearest church. I am your father, Luke

25 The Day of Destiny Arthur tasked Bedivere to throw the sword into the lake. He failed to obey Arthur twice Finally he throws Excalibur into the lake 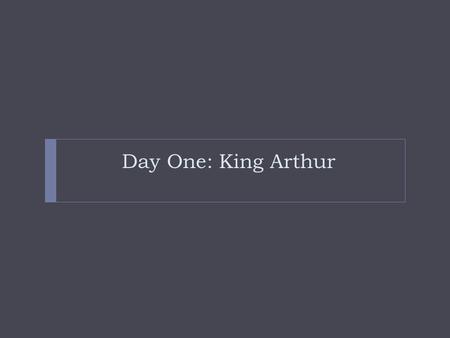