1 Our Living Sphere From Earth to Space

4 Earth’s solid, rocky outer layer is called the lithosphere. The lithosphere includes continents and islands. It extends under oceans, on plains and at the tops of mountains. The prefix litho means stone.

5 The Atmosphere As you know, the atmosphere is the mixture of gases that surrounds the Earth. The atmosphere includes: Nitrogen 78% Oxygen 21% and other gases 1% Remember that Carbon Dioxide is less than 1% of our atmosphere! Water vapor, clouds and solid particles also make up our atmosphere.

9 The biosphere is our “LIVING SPHERE.” Bio means life. The biosphere is that area on top of, below and above the Earth where life exists. Our atmosphere, lithosphere and hydrosphere all contain living things. What does biodiversity mean?

10 Four Layers of the Atmosphere

11 Do Now For Now What happens to both the air pressure and density inside a weather balloon as it floats higher and higher through our atmosphere?

13 Describe Pressure and Density As you rise through the layers of the atmosphere, both pressure and density decrease. The percentage of N 2 (78%) & O 2 (21%) remain the same, but there are actually less molecules of everything. This is why it is harder to breathe at higher elevations Hiking at 14,000 feet tires you out fast. Climbing at 29,000 feet is almost impossible without bottled O 2.

14 The four layers of Earth’s atmosphere are classified according to changes in TEMPERATURE! These layers include the troposphere, stratosphere, mesosphere and thermosphere.

16 The Troposphere The lowest portion of Earth’s atmosphere. The Troposphere actually rests on the Earth’s surface. Contains 80% of atmosphere’s mass and 99% of it’s water vapor and extends for about 17 km (11 miles). Tropo means changing: This is where Earth’s weather occurs. For every 1 km increase in altitude within the troposphere the temperature drops by 6.5 0 C to a maximum of -60 0 C at the top of the troposphere.

18 Without Ozone, more of the sun’s ultraviolet radiation reaches the planet.

19 The Mesosphere Meso means middle. Starts at 50 km and extends to about 80 km (up to 50 miles above Earth). Much colder again up to – 80 0 C. Meteriods burn in this layer. Shooting Stars! The Mesosphere protects Earth from being hit by objects from space.

21 Thermosphere In the Ionosphere, charged particles from the sun strike O2 and N2 molecules causing the Aurora Borealis or Northern Lights!

23 The Greenhouse Effect Humans have changed the atmosphere (even slightly) by burning fossil fuels which adds more CO 2 to our air. CO 2 along with water vapor and methane trap the sun’s infrared solar energy in the Troposphere which is causing an increase in global temperatures (Global Warming). The Greenhouse effect combined with OZONE Depletion is causing temperatures to rise on Earth.

24 Time to Review! Begin with the crossword puzzle. Look over your notes, your “Do Nows,” any activities and your textbooks (pages 22, and Chapter 15). My notes are posted on my calendar. We have covered Earth’s atmospheric composition and layers, the greenhouse effect and the water, carbon and nitrogen cycles. 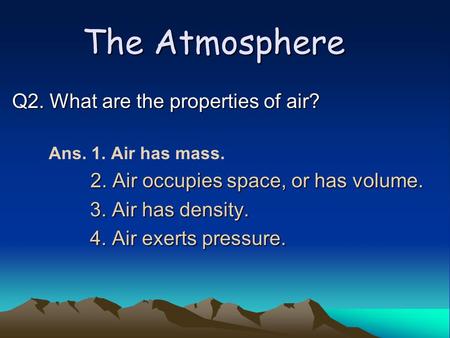 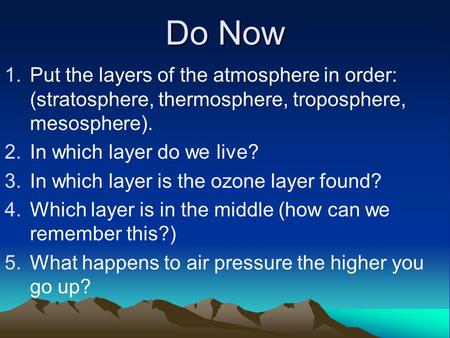 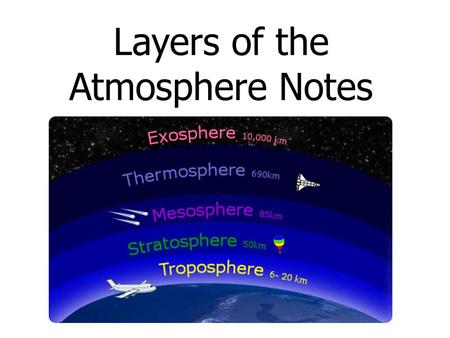 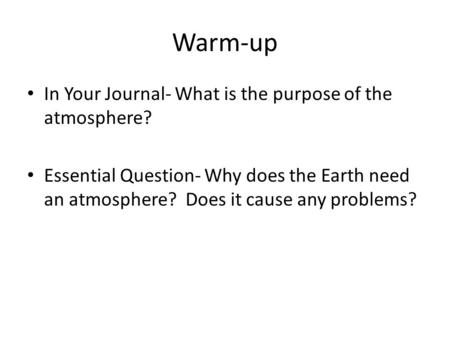