3 Theories of Interest Group Politics Pluralist Theory – Politics is mainly a competition among groups, each one pressing for its own preferred policies. Elite Theory – Societies are divided along class lines and an upper-class elite rules, regardless of the formal niceties of governmental organization. Hyperpluralist Theory – Groups are so strong that government is weakened. This is an extreme, exaggerated form of pluralism.

4 Theories of Interest Group Politics Pluralism and Group Theory – Groups provide a key link between the people and the government. – Groups compete and no one group will become too dominant. – Groups play by the “rules of the game.” – Groups weak in one resource may use another. – Lobbying is open to all so is not a problem.

5 Theories of Interest Group Politics: Pluralism Elites and the Denial of Pluralism – Real power is held by the relatively few. – The largest corporations hold the most power. – Elite power is fortified by a system of interlocking directorates of these corporations and other institutions. – Other groups may win many minor policy battles, but elites prevail when it comes to big policy decisions. – Lobbying is a problem because it benefits the few at the expense of the many.

6 Theories of Interest Group Politics: Hyperpluralism Subgovernments – Networks of groups that exercise a great deal of control over specific policy areas. – Consist of interest groups, government agency, and congressional committees that handle particular policies – Also known as iron triangles The hyperpluralist critique – Groups have become too powerful as the government tries to appease every interest. – Many subgovernments (iron triangles) aggravate the process. – Trying to please every group results in contradictory policies.

7 What Makes an Interest Group Successful?

8 The Surprising Ineffectiveness of Large Groups – Potential group: all the people who might be interest group members because they share a common interest – Actual group: the part of the potential group consisting of members who actually join – Collective good: something of value that cannot be withheld from a group member

9 What Makes an Interest Group Successful? Free-Rider Problem – Some people don’t join interest groups because they benefit from the group’s activities without officially joining. – Bigger the group, larger the problem – Large groups are difficult to organize Olson’s law of large groups: – “The larger the group, the further it will fall short of providing an optimal amount of a collective good.” – Overcome Olson’s law by providing selective benefits: Goods that a group can restrict to those who pay their annual dues

10 What Makes an Interest Group Successful? Small groups are better organized and more focused on the group’s goals. – Multinational corporations are successful because there are few of them and, therefore, have an easier time organizing for political action. – Consumer groups have a difficult time getting significant policy gains because the benefits are spread over the entire population. – Public interest lobbies seek “a collective good, the achievement of which will not selectively and materially benefit the membership activities of the organization.”

11 What Makes an Interest Group Successful? Intensity – Single-Issue groups: groups that focus on a narrow interest, dislike compromise, and often draw membership from people new to politics – Groups may focus on an emotional issue, providing them with a psychological advantage. – Intensity encourages non-conventional means of participation, i.e.—protests

12 What Makes an Interest Group Successful? Financial Resources – Not all groups have equal amounts of money. – Monetary donations usually translate into access to the politicians, such as a phone call, meeting, or support for policy. – Wealthier groups have more resources—and presumably more access—but they do not always win on policy. 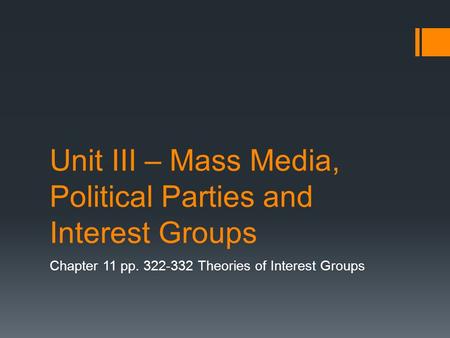