3 The Role and Reputation of Interest Groups Why Interest Groups Get Bad Press – The writers of the Constitution disliked organized groups- parties and interest groups. – Dishonest lobbyists get more press than the honest ones- even though there are far more honest lobbyists. – The term “lobbying” in general has negative connotations.

5 Theories of Interest Group Politics- Pluralism Definition: – Politics is mainly a competition among groups, each one pressing for its own preferred policies. – Many centers of power and many diverse, competing groups. – No group wins or loses all the time. – Groups provide the key link between the people and the government.

6 Theories of Interest Group Politics- Pluralism Continued… – Groups compete – No group becomes too dominant – Groups play by the rules – Groups weak in one resource can rely on another resource. – Lobbying is open to all, therefore, not a problem.

7 Theories of Interest Group Politics- Elitism Definition: – Societies are divided along class lines and an upper-class elite will rule, regardless of the formal niceties of governmental organization. – Numerous groups means nothing, the power is not equally divided among them- some have much more. – The largest corporations hold the most power.

8 Theories of Interest Group Politics- Elitism Continued… – The power is strengthened by a system of interlocking directorates of these corporations and other institutions. – Corporate elites are willing to lose the minor policy battles, but work to win the major policy issues in their favor. – Lobbying is a problem because it benefits the few at the expense of the many.

9 Theories of Interest Group Politics- Hyperpluralism Definition: – Groups are so strong that government is weakened. Extreme, exaggerated form of pluralism. – Iron Triangles keep government from working properly. – Interest groups have become too powerful since the government tries to serve every interest.

10 Theories of Interest Group Politics- Hyperpluralism Continued… – The many subgovernments (iron triangles) aggravate the process. – When the government tries to please all the groups, the policies become confusing and contradictory. – But with more interest groups getting involved, these subgovernments may be dissolving.

12 What Makes an Interest Group Successful? The Surprising Ineffectiveness of Large Groups – Free-Rider problem: Some people don’t join interest groups because they benefit from the group’s activities without officially joining. – The bigger the group, the larger the free-rider problem. – Large groups are difficult to keep organized.

13 What Makes an Interest Group Successful? – Small groups are better organized and more focused on the group’s goals. – Thus consumer groups have a difficult time getting significant policy gains- the benefits are spread over the entire population. – Groups that can provide selective benefits is a way to overcome this problem.

14 What Makes an Interest Group Successful? Intensity – Single-Issue groups: Groups that focus on a narrow interest and dislike compromise. – Groups may focus on an emotional issue, providing them with a psychological advantage. – May be more likely to use protests and other means of political participation than traditional interest groups that use lobbyists.

15 What Makes an Interest Group Successful? Financial Resources – Not all groups have equal amounts of money. – Monetary donations usually translate into access to the politicians- a phone call, a meeting, etc. – There is a bias towards the wealthier groups. – But, the wealthier groups don’t always win in the policy arena.

17 How Groups Try to Shape Policy Lobbying – “communication by someone other than a citizen acting on his own behalf, directed to a governmental decisionmaker with the hope of influencing his decision.” – Two basic types: Those that are employed by a group, and those that are hired temporarily.

19 How Groups Try to Shape Policy Electioneering – Direct group involvement in the election process. – Political Action Committee (PAC): Used by corporations and unions to donate money to candidates. Sometimes used by groups as well. – Groups are often picky about who gets money. – Groups can do more than just donate money.

20 How Groups Try to Shape Policy Litigation – If an interest group fails in one area, the courts may be able to provide a remedy. – Interest groups can file amicus curiae briefs in court cases to support their position. – Class Action lawsuits permit small groups of people to try and correct a situation on behalf of a much larger group.

21 How Groups Try to Shape Policy Going Public – Groups try and cultivate a good public image. – Groups use marketing strategies to influence public opinion of the group and its issues. – Groups will purchase advertising to motivate the public about an issue. – Currently, some groups use a more “soft sell” approach style of public relations.

23 Understanding Interest Groups Interest Groups and Democracy – A wide open government would force groups to compete and counterbalance each other. – More groups mean more lobbyists and thus better democracy to some. – Others argue that groups are not equal and some get more than they should, which is not good for democracy. 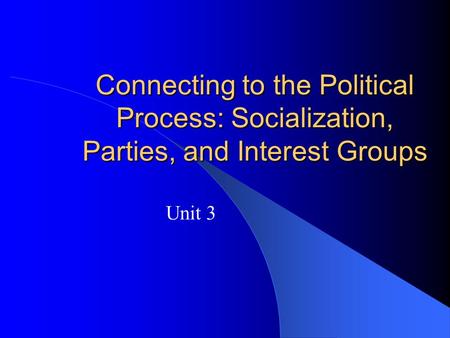