4 Major Ocean Currents Surface currents extend to about 400 m below the surface, and they move as fast as 100 km/day. Earth’s major wind belts, called prevailing winds, influence the formation of ocean currents and the direction they move.

5 Rip Currents A rip current is a narrow, powerful surface current which flows away from the shore. It is caused by pressure building up from uneven buildup of water from waves. They can flow very quickly and can be difficult to detect until you are in one.

6 Rip Currents are Dangerous!
Rip currents are responsible for about 150 deaths every year in the United States. About 80 percent of all beach rescues are related to rip currents. Rip currents don’t pull swimmers under, they flow out for several miles. If you get caught in a rip current, swim parallel to the shore until you are out of the current.

7 Coriolis Effect The Coriolis Effect is the movement of wind and water to the right or left that is caused by Earth’s rotation. It causes fluids such as air and water to curve to the right in the Northern hemisphere, in a clockwise direction. The Coriolis effect also cases fluids to curve to the left in the southern hemisphere, in a counterclockwise direction.

8 Coriolis Effect The shapes of continents and other land masses affect the flow and speed of currents. Currents form small or large loops and move at different speeds, depending on the land masses they contact.

13 Great Ocean Conveyor Belt
The Great Ocean conveyor Belt is the name for a model of the large system of ocean currents that affects weather and climate by circulating thermal energy around Earth. In this model, high salinity water cools and sinks in the North Atlantic, and deep water returns to the surface in the Indian and Pacific Oceans through upwelling

15 Video on Ocean Currents
Mass flows of water, or currents, are essential to understanding how heat energy moves between the Earth’s water bodies, landmasses, and atmosphere. The ocean covers 71 percent of the planet and holds 97 percent of its water, making the ocean a key factor in the storage and transfer of heat energy across the globe. The movement of this heat through local and global ocean currents affects the regulation of local weather conditions and temperature extremes, stabilization of global climate patterns, cycling of gases, and delivery of nutrients and larva to marine ecosystems. 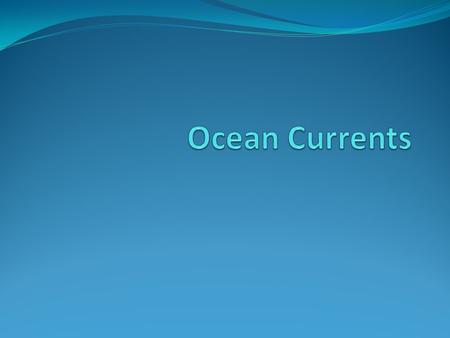 Major Ocean Currents An Ocean Current is a large volume of water flowing in a certain direction. Surface currents are driven by wind and carry warm or. 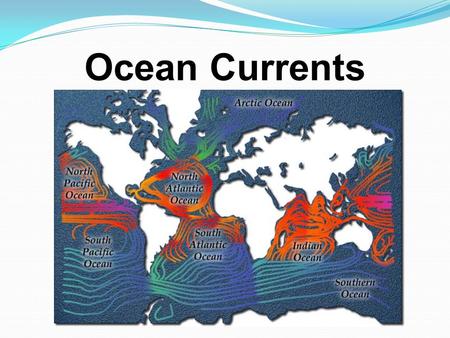