2 THINK ABOUT IT The only system in the body that food actually enters is the digestive system. So how does food get to the rest of the body after the process of digestion?

7 Absorption Once food has been broken into small molecules, it can be absorbed by the cells of the small intestine. From there, the molecules enter the circulatory system, which transports them throughout the body.

8 Elimination The digestive system cannot digest and absorb all food products that enter the body. Some materials travel through the large intestine and are eliminated from the body as feces.

9 The Process of Digestion
What occurs during digestion?

10 The Process of Digestion
What occurs during digestion? During digestion, food travels through the mouth, esophagus, stomach, and small intestine. Mechanical digestion and chemical digestion are the two processes by which food is reduced to molecules that can be absorbed.

11 The Process of Digestion
The human digestive system is built around an alimentary canal—a one-way tube that passes through the body.

12 The Process of Digestion
During digestion, food travels through the mouth, esophagus, stomach, and small intestine. Mechanical and chemical digestion are the two processes by which food is reduced to molecules that can be absorbed.

13 The Mouth Chewing begins the process of mechanical digestion.
Chemical digestion begins as digestive enzymes in saliva start the breakdown of complex carbohydrates into smaller molecules.

14 Teeth The teeth are anchored in the bones of the jaw.
The incisors, cuspids, and bicuspids cut into and tear at food. The molars grind and crush food into a fine paste that can be swallowed. Meanwhile, your tongue moves food around so that it comes in contact with your teeth.

15 Saliva The salivary glands secrete saliva, which helps to moisten the food and make it easier to chew. The release of saliva is under the control of the nervous system and can be triggered by the scent of food.

16 Saliva Saliva also begins the process of chemical digestion.
Saliva contains an enzyme called amylase that begins to break the chemical bonds in starches, forming sugars. Saliva also has lysozyme, an enzyme that fights infection by digesting the cell walls of many bacteria that enter the mouth with food.

17 The Mouth Once food is chewed, the combined actions of the tongue and throat muscles push the clump of food, called a bolus, down the throat.

18 The Process of Digestion
The bolus enters the area at the back of the throat called the pharynx. As this occurs, a flap of connective tissue called the epiglottis closes over the opening to the trachea.

19 The Process of Digestion
The action of the epiglottis prevents food from moving into the air passageways to the lungs as it passes through the pharynx and into the esophagus.

20 The Esophagus The bolus passes through a tube called the esophagus into the stomach. Contractions of smooth muscles, known as peristalsis, provide the force that moves food through the esophagus toward the stomach. Peristalsis is shown in the figure below.

21 Esophagus After food passes into the stomach, a thick ring of muscle called the cardiac sphincter closes the esophagus. This prevents the contents of the stomach from flowing back. A backflow of stomach acid into the esophagus results in a burning sensation in the center of the chest known as heartburn.

22 Chemical Digestion in the Stomach
The stomach is a large muscular sac that continues chemical and mechanical digestion of food.

23 Chemical Digestion in the Stomach
The lining of the stomach contains millions of microscopic gastric glands that release hydrochloric acid and an enzyme called pepsin that functions best in acidic conditions. Pepsin begins the digestion of proteins by breaking them into smaller polypeptide fragments.

24 Chemical Digestion in the Stomach
Another stomach gland produces mucus, a fluid that lubricates and protects the stomach wall. If this mucous layer fails, acids may erode the stomach lining and cause a sore called a peptic ulcer. Most peptic ulcers are the result of infection with the bacterium Helicobacter pylori (shown in the micrograph) and can be cured with antibiotics that kill the bacteria.

25 Mechanical Digestion in the Stomach
Alternating contractions of the stomach’s three smooth muscle layers thoroughly churn and mix the swallowed food, breaking it down and allowing enzymes greater access to the food. A mixture with an oatmeal-like consistency called chyme is produced.

26 Mechanical Digestion in the Stomach
After an hour or two, the pyloric valve—located between the stomach and small intestine—opens, and chyme begins to spurt into the small intestine.

27 Digestion in the Small Intestine
As chyme is pushed through the pyloric valve, it enters the duodenum. The duodenum, where almost all of the digestive enzymes enter the intestine, is the first of three parts of the small intestine.

28 Digestion in the Small Intestine
As chyme enters the duodenum from the stomach, it mixes with enzymes and digestive fluids from the pancreas, the liver, and the lining of the duodenum.

29 Pancreas Just behind the stomach is the pancreas, a gland that serves three important functions. 1. One function is to produce hormones that regulate blood sugar levels.

30 Pancreas Just behind the stomach is the pancreas, a gland that serves three important functions. 2. It also produces enzymes that break down carbohydrates, proteins, lipids, and nucleic acids.

31 Pancreas Just behind the stomach is the pancreas, a gland that serves three important functions. 3. The pancreas also produces sodium bicarbonate, a base that quickly neutralizes stomach acid as chyme enters the duodenum.

32 The Liver and Gallbladder
Assisting the pancreas in fat digestion is the liver. The liver produces bile, a fluid loaded with lipids and salts. Bile is stored in a small, pouchlike organ called the gallbladder.

33 The Liver and Gallbladder
When fat is present in the duodenum, the gallbladder releases bile through a duct into the small intestine. Bile breaks up the globs of fat into smaller droplets, making it possible for enzymes to reach the smaller fat droplets and break them down.

34 Effects of Digestive Enzymes
Digestive enzymes hasten the breakdown of foods and make nutrients available to the body.

35 Absorption and Elimination
How are nutrients absorbed and wastes eliminated?

36 Absorption and Elimination
How are nutrients absorbed and wastes eliminated? Most nutrients from food are absorbed through the walls of the small intestine. The large intestine absorbs water and several vitamins and prepares waste for elimination from the body.

37 Absorption From the Small Intestine
After leaving the duodenum, chyme moves along the rest of the small intestine. The chyme is now a rich mixture of small- and medium-sized nutrient molecules that are ready to be absorbed.

40 Absorption From the Small Intestine
By the time chyme is ready to leave the small intestine, complex organic molecules have been digested and absorbed, leaving only water, cellulose, and other undigestible substances behind. As materials move from the small intestine to the large intestine, they pass the appendix. In some mammals, the appendix processes cellulose and other materials. Humans usually notice their appendix only if it becomes infected and needs to be surgically removed.

43 Absorption From the Small Intestine
Colonies of bacteria present in the large intestine produce compounds that the body is able to use, including vitamin K. When large doses of antibiotics are given to fight an infection, they can destroy these bacteria, and vitamin K deficiency can occur.

44 Elimination The concentrated waste material—the feces—that remains after most of the water has been removed passes into the rectum and is eliminated from the body through the anus. 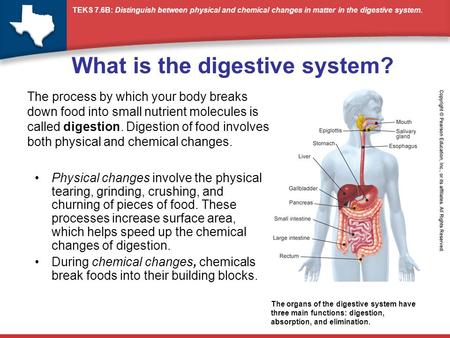 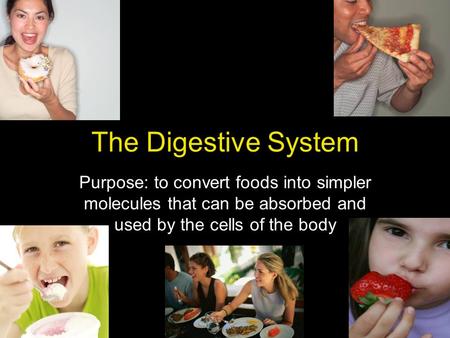 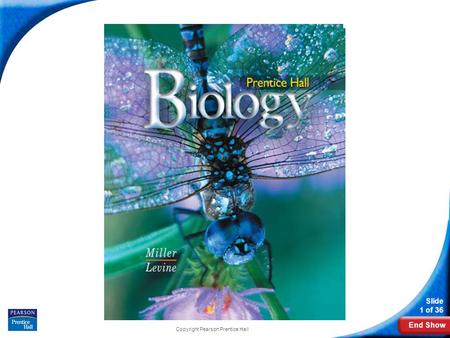 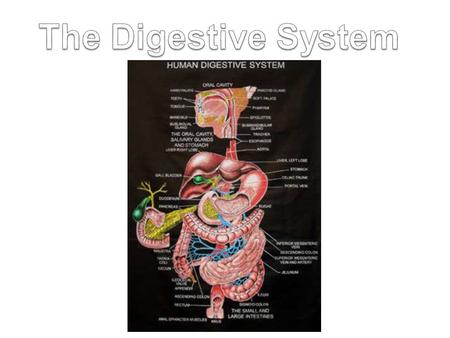 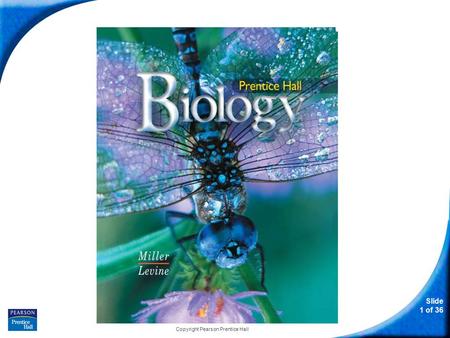 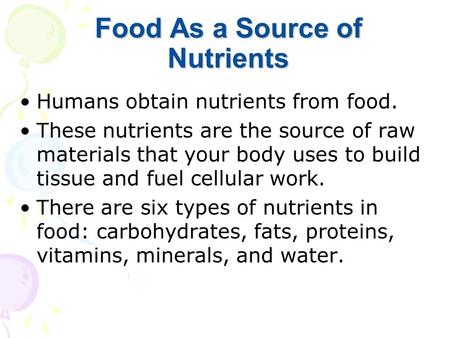 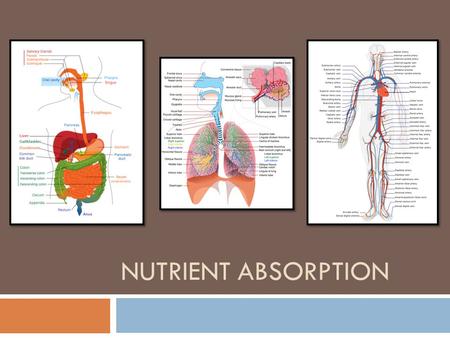 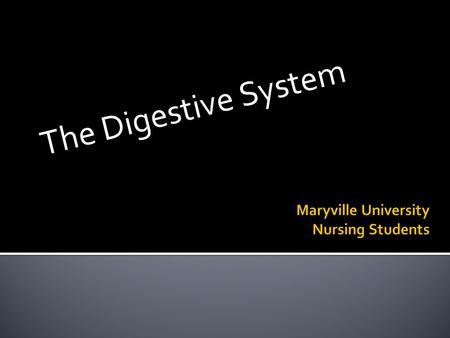 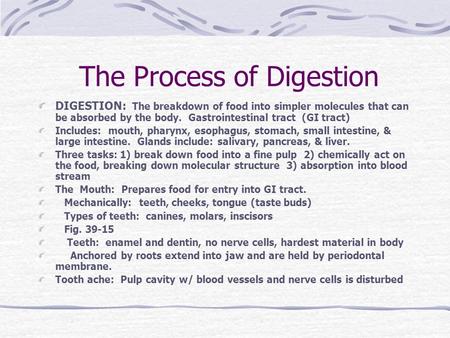