Presentation on theme: "Chapter 2: The Nature of Molecules & the Properties of Water"— Presentation transcript:

1 Chapter 2: The Nature of Molecules & the Properties of Water
OCC Bio-114 Created by Dave Werner

2 What are you worth? Compare chemistry of the human body to the earth’s crust and seawater. Any similarities?

3 2.1 The Nature of Atoms ELEMENTS ARE PURE SUBSTANCES THAT CANNOT BE BROKEN DOWN CHEMICALLY INTO SIMPLER KINDS OF MATTER. More than 100 elements have been identified, though fewer than 30 are Important in Living Things.  (The Periodic Table of Elements, Fig. 2.3) All of the Elements are arranged on a Chart known as THE PERIODIC TABLE.  Among the information provided in The Periodic Table are the ATOMIC NUMBER, THE CHEMICAL SYMBOL, AND THE ATOMIC MASS FOR EACH ELEMENT. Who developed the Periodic Table? Dmitry Mendeleev

4 ELEMENTS AND ATOMS > 90 Percent of the Mass of living things is composed of JUST FOUR ELEMENTS:  OXYGEN, O, CARBON, C, HYDROGEN, H, AND NITROGEN, N. Each Element has different Chemical Symbol which consist of One or Two Letters. Can you give any examples?

5 ELEMENTS AND ATOMS In most cases, the Symbol Derives from the First Letter or Other Letters in the Name of the Element, like - C for Carbon or Cl for Chlorine. Some of the Symbol Names come form their Latin Name - Na for Sodium (natrium) or K for Potassium (Kalium).

7 ATOMS (fig.2-3) Protons Neutrons Electrons What are the charges for:
The Simplest Particle of an Element that RETAINS ALL of the PROPERTIES of the Element is an ATOM.  Atoms are so small that their TRUE Structure Cannot be Observe, but scientist have developed Models that describe the Structure and Properties of the Atom (Figure 2.2). An Atom consists of THREE Kinds of Particles, PROTONS AND NEUTRONS FOUND IN THE ATOMS NUCLEUS, AND ELECTRONS. The Central Core of an Atom is called the NUCLEUS, Most of the MASS of an Atom is concentrated in its Nucleus and consists of Two Kinds of Particles: What are the charges for: Protons Neutrons Electrons

8 Atoms Continued A. PROTONS:  A POSITIVE CHARGED PARTICLE.  All Atoms of a given Element have the SAME Number of Protons.  The Number of Protons in an Atom is called the ATOMIC NUMBER which appears Above the Chemical Symbol. B. NEUTRONS - NEUTRONS HAVE NO ELECTRICAL CHARGE.  The number of Neutrons in an Atom is derived by the ATOMIC MASS MINUS THE ATOMIC NUMBER.  OR THE NUMBER OF PROTONS PLUS THE NUMBER OF NEUTRONS EQUAL THE ATOMIC MASS. C. The number of Positively Charged Protons is Balanced by an Equal Number of small,  NEGATIVELY CHARGED PARTICLES called ELECTRONS (e-).

11 Radioisotope An unstable, or radioactive isotope.
Radioactive Decay = Natural process by which an atom emits energy as subatomic particles and x-rays as its unstable nucleus spontaneously breaks apart; transforms one element into another in a predictable time span. Ex: Carbon Dating

14 2.3 What Happens when Atom Bonds With Atom?
Each Orbital or Energy Level (shell) can hold only a certain number of electrons. The First Level, Nearest the Nucleus, can only hold TWO Electrons.  The Second and other OUTER Levels can hold up to EIGHT Electrons each. A STABLE ATOM IS AN ATOM THAT HAS A FULL OUTER LEVEL.

15 Atoms Continued The Electrical Charges of the Electrons OFFSET those of the Protons, making the NET Electrical Charge of an Atom ZERO. Electrons are high-energy particles with very little mass.  They MOVE About the Nucleus at very High Speeds in one of seven different ORBITALS OR ENERGY LEVELS. An orbitals is a three-dimentional region around a nucleus that indicates the probable location of an electron. (fig.) Electrons in orbitals that are farther away form the nucleus have Greater Energy than electrons that are in orbitals closer to the nucleus.

17 From Atoms to Molecules
1. Under Natural Conditions, MOST Elements DO NOT Exist by themselves; Most elements COMBINE with other Elements. 2. A PURE SUBSTANCE that is made up of Atoms of TWO or MORE Elements is called a COMPOUND. 3. The Proportion of each kind of Atom is FIXED,  A CHEMICAL FORMULA Shows the KIND and PROPORTION of Atoms each Element that forms a particular Compound - WATER = H20 - indicates TWO HYDROGEN Atoms to ONE OXYGEN Atom.

18 From Atoms to Molecules
Is a Mixture different than a Compound?

19 2.3 The Nature of Chemical Bonds
The Tendency of elements to combine and form Compounds depends on the Number and Arrangement of Electrons in their Atoms. An Atom is Chemically Stable when its Outermost Energy Level is Filled (8 E-) Most Atoms are NOT Stable in their Natural State, so they tend to React, or Combine with other Atoms (CHEMICAL REACTIONS), in ways that make the Atoms More Stable. Most Atoms tend to undergo CHEMICAL REACTIONS,  Combining in ways that Cause their Atoms to Become Stable.  In Chemical Reactions, CHEMICAL BONDS are broken, Atoms are Rearranged, and New Chemical Bonds, or Attachments, are formed.

22 COVALENT BONDS - SHARING OF ELECTRONS
1. A COVALENT BOND forms when TWO Atoms SHARE One or MORE Pairs of Electrons. (Figure) 2. Water is made up by Atoms Held together by a Covalent Bonds.  In the Presence of one another, hydrogen atoms and oxygen atoms can achieve stability by sharing pairs of electrons in a ration of TWO Atoms of Hydrogen to ONE Atom of Oxygen. 3. Covalent Bonding Results in the Formation of MOLECULES. 4. A MOLECULE is the Simplest Part of a Substance that Retains all the Properties of the Substance and that can Exist in a Free State. 5.   Water formation is an example of a Molecule of Water.

23 HYDROGEN BONDING 1. The Polar Nature of Water also causes Water Molecules to be attracted to one another or stick together. 2. The Type of ATTRACTION that Holds TWO Water Molecules Together is called HYDROGEN BONDING. (Fig. 2.8c) 3. A POSITIVE REGION OF ONE MOLECULE IS ATRACTED TO THE NEGATIVE REGION OF ANOTHER MOLECULE. 4. A Hydrogen Bond is a WEAK Bond that can be easily broken.

24 2.4-2.5 Water: A Vital Compound Polarity of the Water Molecule
Many of Water's Biological Functions stem from its Chemical Structure. In the Water Molecule, H2O, the Hydrogen and Oxygen Atoms SHARE Electrons to form a Covalent Bond, but these atoms DO NOT Share the electrons Equally. The Oxygen Atom, because of it 8 Protons versus Hydrogen's 1 Proton, PULLS the Shared Electrons towards its Nucleus and AWAY from the Hydrogen Atom.  As a result, the Electrical Charge is UNEVENLY Distributed in the Water molecule. (Fig. 2.9) Although the TOTAL Electrical Charge on a Water Molecule is NEUTRAL, the region of the molecule where the Oxygen Atom is located has a Slightly NEGATIVE Charge, while the regions of the molecule where each of the Two Hydrogen Atoms are located have a Slightly POSITIVE Charge.

26 Water’s Solvent Properties
Because of this UNEVEN PATTERN of CHARGE, Water is called a POLAR MOLECULE.  Molecules with a Slightly Negative End and a Slightly Positive are called Polar Molecules. It is this Polar Nature that makes Water VERY EFFECTIVE in Dissolving many other substances. Water Dissolves Other Polar Substances including, Sugars, some Proteins, and Ionic Compounds such as Sodium Chloride, NaCl. An Ionic Compound mixed in water trends to DISSOCIATE (Break Apart) into Ions.  This breaking up of an Ionic Compound FREES Ions to participate in many Biological Reactions. Demonstration – Salt in water

27 SOLUTIONS SOLUTION is a Mixture in which One or More Substances are UNIFORMLY Distributed in Another Substance.  Solutions can be mixtures of liquids, solids, or gases. Think of Sugar Water (The Solution) - the Sugar is dissolved in the Water and is Uniformly Distributed. The SOLUTE (Sugar) is the Substance Dissolved in the Solution (Sugar Water).  The particles that compose the Solute may be Ions, Atoms, or Molecules. The SOLVENT (Water) is the Substance in which the Solute is dissolved. When Sugar, a Solute, and Water, a Solvent, are mixed, a Solution of Sugar Water Results.

29 Water’s Adhesion ADHESION is the Attractive Force BETWEEN UNLIKE SUBSTANCES. Together, Adhesion and Cohesion enable Water Molecules to MOVE UPWARD through narrow tubes Against the PULL OF GRAVITY.  This Property of Water is known as CAPILLARITY.  This is what allows Plants to move Water from their Roots to their Leaves. Water MUST GAIN or LOSE a LARGE Amount of ENERGY for its Temperature to Change = High Specific Heat.  This makes Water a VERY STABLE Molecule. Water's ability to Absorb Large amounts of Energy HELPS keep cells at an EVEN Temperature despite Temperature changes in the Environment.

Download ppt "Chapter 2: The Nature of Molecules & the Properties of Water" 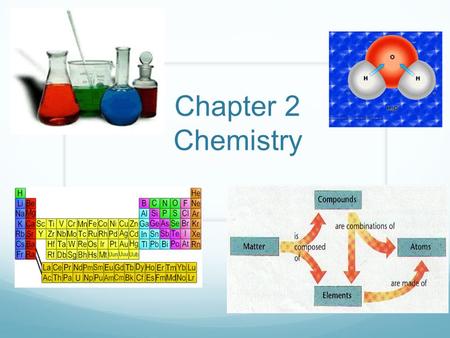 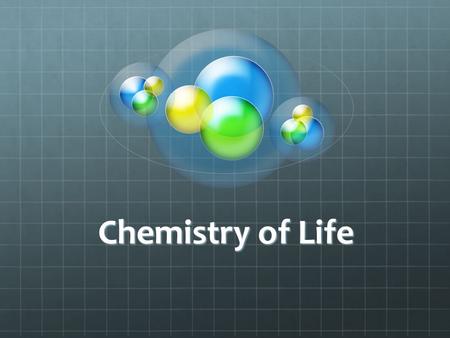 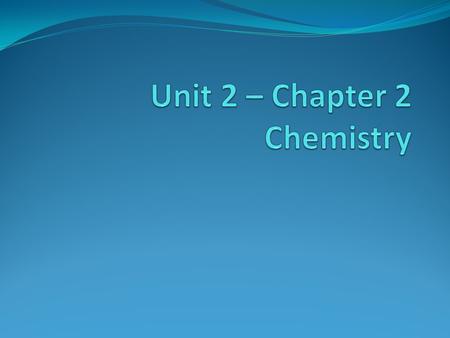