WAVES Unit 4 Mr. Olsen What is a wave? A vibration or disturbance. SOUND & LIGHT are forms of energy that travel in waves.

Presentation on theme: "WAVES Unit 4 Mr. Olsen What is a wave? A vibration or disturbance. SOUND & LIGHT are forms of energy that travel in waves."— Presentation transcript:

4 What is a wave? A vibration or disturbance. SOUND & LIGHT are forms of energy that travel in waves.

8 Parts of a wave

11 Wavelength (λ) The length of one wave is measured from a point on one wave to that same point on the next wave. Crest to crest Trough to trough Midpoint (past crest & trough) to midpoint

18 Types of Waves Compressional A Compressional wave is when matter vibrates in the same direction as the wave travels. These are also known as Longitudinal waves.

19 Longitudinal: The medium moves in the same direction as the wave. Example: Sound waves

20 Parts of a Compressional Wave Compression: where the wave “squeezes” or compresses the medium Rarefraction: Where there is space in the wave with no compression.

23 Type of medium The type of medium changes the way a wave moves. Mediums with close molecules travel quickly. This is why waves travel better in liquids and solids than in gases.

24 Waves through air However, air can still let waves pass at a great speed. The speed of sound through air is 344 m/s! That is really fast!

25 What happens to a wave when it runs into something? REFLECT- Bounce off REFRACT- Break DIFFRACT- Bend GET ABSORBED- Soak into PENETRATE- Pass through

29 How does sound travel? Sound is a form of energy that moves in waves through matter. Sound waves are longitudinal waves or compressional waves.

30 Properties of Sound Waves Sound waves move out from a vibrating object in all directions. As a sound wave travels further from the object, the wave gets weaker.

31 How is sound produced? The movement of particles around a vibrating object creates a sound wave. Your vocal cords vibrate air molecules. They vibrate other air molecules and so on until the air molecules by the listener’s ear vibrate their ear drum.

33 Speed of Sound If the particles are closer together, they hit faster and the wave (sound) moves faster. Does sound move faster in: air or water? water or steel?

36 LOUD and soft Sounds Intensity: strength of a sound Which sound is more intense, an airplane or talking? Which has more energy? Intensity is measured in Decibels. Your ear hears intensity as volume of a sound.

39 and sounds The pitch describes high and low sounds. A high sound like a flute has a high pitch. A low sound like a tuba has a low pitch.

42 ECHOS When sound waves reflect, they make an echo. Sonar uses echo to locate objects under water. Ultrasound uses echos to “see” inside the human body.

45 Types of Light Waves Light waves are grouped by different frequencies and wavelengths. These are the different types of electromagnetic waves.

46 Electromagnetic Spectrum Energy that is given off by electrons that moves in waves.

52 Microwaves Microwaves can be used to study the Universe, communicate with satellites in Earth orbit, and cook popcorn.

53 Infrared Waves Infrared waves are used to heat food at restaurants, by police scanners, in your remote control.

54 Ultraviolet Waves UV Waves are used in tanning and in sterilization of equipment.

55 X-Ray Waves X-Rays are so strong, they can go right through you!

56 Gamma Waves Gamma rays and X- Rays can cause cancer, but gamma rays can also be used to destroy cancer cells: this is called radio-therapy or radiation.

60 LIGHT WAVES- Visible Light VISIBLE LIGHT is a form of electromagnetic energy that we can see.

63 PRISM A prism REFRACTS white light into all its colors!

64 What color light is refracted the most?

69 How does light travel? Light is made up of bunches of energy called photons. Light travels in waves. Light is an example of a transverse wave.

74 When light hits a material, the light may: Reflect: Bounce off Refract: Bend Get Absorbed

77 The Law of Reflection

82 Diffusion = the breaking up of light

85 Look at the curved mirrors. What do you observe about the reflection?

88 Sound waves that hit this would all go to the microphone.

89 What color light is in the middle?

92 Refraction Waves bend when they pass into a different medium. This happens because the speed of light changes.

101 Your eyes have color sensors. Thousands of rods & cones in your eye tell your brain how much red, green and blue light hits your eye.

103 When ALL of the colors of light combine… White light is produced.

105 The Sun gives off "white" light, a mixture of all the colors in the spectrum. The object looks WHITE because an equal mixture of RED, BLUE, and GREEN light is reflected off the object and interpreted by our eyes and brain as WHITE.

106 You can use a FILTER to absorb a color of light.

107 Your TV works using little pixels that look like this: Any color can be made from a combination of these three colors of light.

108 When colors of pigment, (or paint) combine:

110 Colorblindness Some people have trouble telling the difference between colors. Their rods and cones do not detect differences.

114 Sometimes your eyes get tired! Your rods & cones get used to what they see and it takes them some time to go back to normal.

116 Sometimes, your eyes play tricks on you!

120 How many shelves are here?

122 Are these bricks in straight rows?

123 Look at the center and move closer to the screen!

131 Are the long lines parallel?

133 Are the purple lines parallel?

Download ppt "WAVES Unit 4 Mr. Olsen What is a wave? A vibration or disturbance. SOUND & LIGHT are forms of energy that travel in waves." 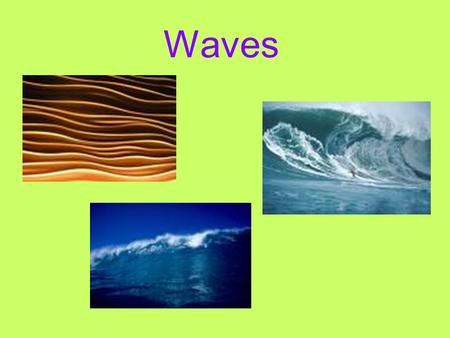 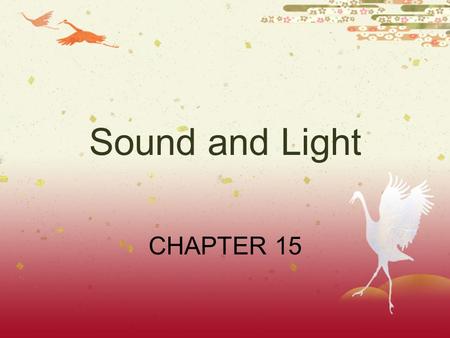 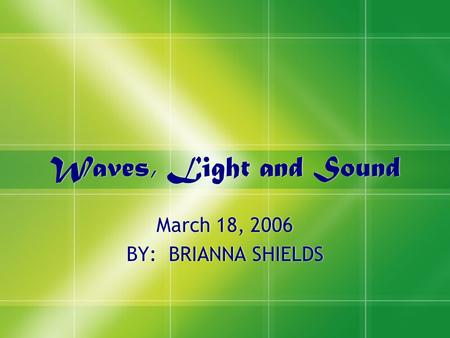 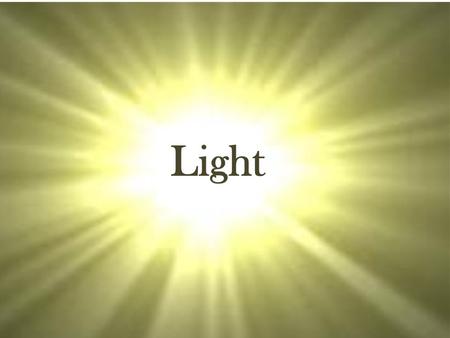 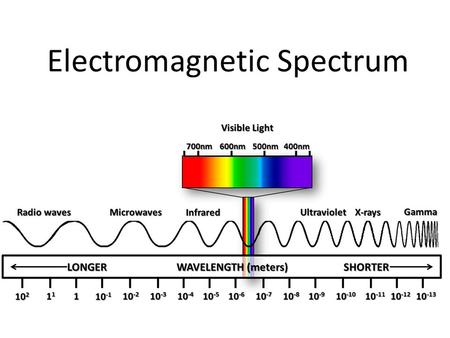 Electromagnetic Spectrum. Waves are everywhere! Wave – Disturbance that moves through space – Takes energy/information and moves it from one location. 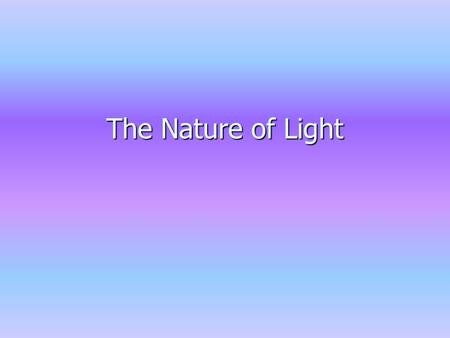 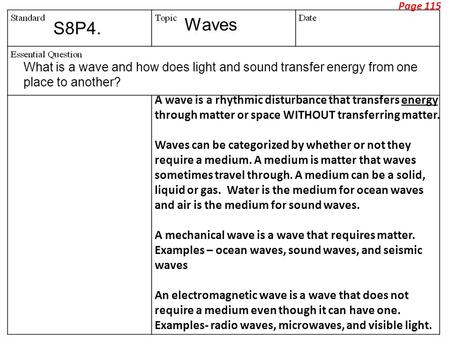