7 what is geography? The study of spatial variation
How and why things differ from place to place on the surface of the earth The study of how observable spatial patterns evolved through time

11 what is geography? Geography is a spatial science Spatial behavior of people Spatial relationships between places Spatial processes that create or maintain those behaviors and relationships

15 Spatial, spatial, spatial
still confused? -adjective 1. of or pertaining to space. 2. existing or occurring in space; having extension in space

18 Five themes of geography
1) Place: the distinctive and distinguishing physical and human characteristics of locales. How you describe a “place.” Vocab : Physical geography and cultural landscape, sense of place Skills: Description, compare and contrast Questions: What does ____ look like? Why? How is it different from ____?

19 five themes of geography: Place
Every place has characteristics that are natural and some that are man-made. Examples of Physical or Natural include: weather, climate, natural vegetation, landforms, bodies of water, native animal life, etc. Examples of Human and Cultural include: jobs and economic activities, population distribution and density, religion, government, food, types of homes, education, history, language, etc.

20 five themes of geography: Place
Every place is a place – we study the character and meaning of that place We have a “Sense of Place” (ex: the feeling of home). We have a “Perception of Place” (even if you’ve never been somewhere, you think you know what it’s like from TV, movies, others, pictures, etc.

27 Five themes of geography
2) Location: the meaning of absolute and relative position on the earth's surface Vocab : Global Positioning Systems (GPS), scale, latitude and longitude, distance Skills: Map reading, identification Questions: Where is ____? Where is ____ relative to where I am?

28 Relative and absolute location
Everyone Stand up! Tell the person next to you: Where you were born? Where you live? (not exact address of course… creepers!) Where’s the most beautiful place you’ve ever been?

31 Five themes of geography: INTERACTION
3) Interaction (Human/Environment): This is how people ADAPT to their environment. EX: People that move to a cold climate would have to change their style by buying warmer clothes. Also…

32 Five themes of geography: INTERACTION
How people CHANGE (modify) the environment! EX: Building subdivisions on what was once a forest or building levees along rivers.

37 Good Afternoon Look over PLIRM lists and make sure you have Examples and Drawings!

39 Five themes of geography: Regions
4) Regions: how they form and change A region can be a place united by PHYSICAL conditions. EX: A desert, forest, mountain range, plain, or a coast can be described as a region

40 Five themes of geography: Regions
4) Regions: how they form and change A region can also be somewhere that is united by SIMILAR cultural traits. EX: A place that is largely populated by people of the Muslim religion would be considered a region.

49 Can a place be included in more than one region?

50 Five themes of geography
5) Movement: patterns and change in human spatial interaction on the earth Vocab: Migration, diffusion, globalization Skills: Explanation, prediction Questions: Why did people move from one place to another? What does it mean for the people and places involved? What affect did their new ideas have on the native population? 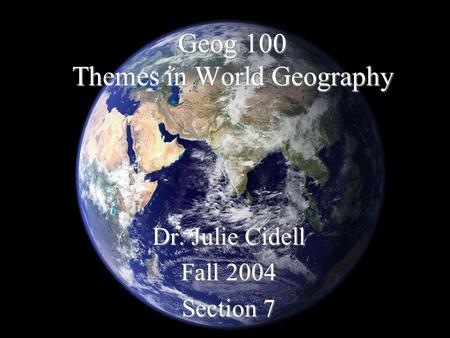 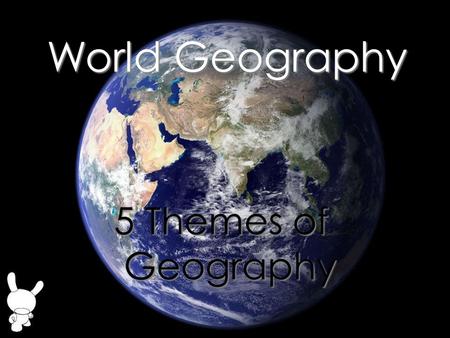 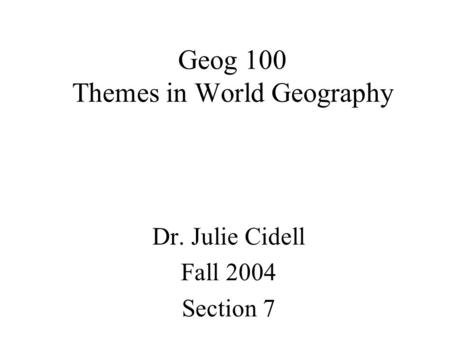 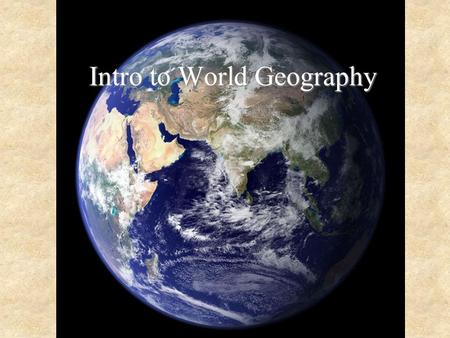 Intro to World Geography. What is geography? The study of spatial variation How – and why – things differ from place to place on the surface of the earth. 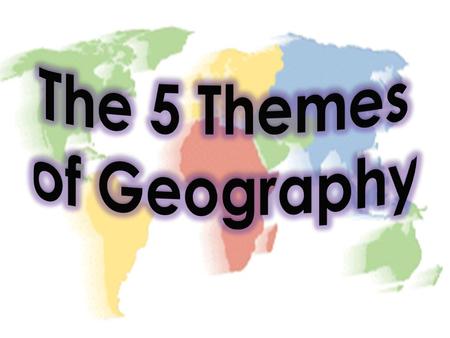 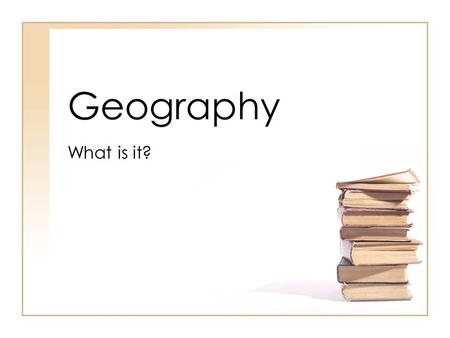 Geography What is it?. 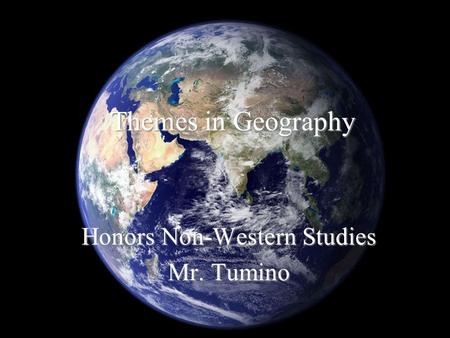 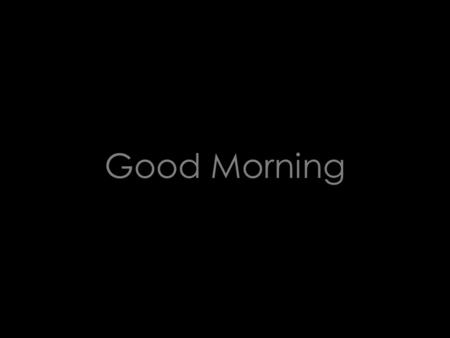 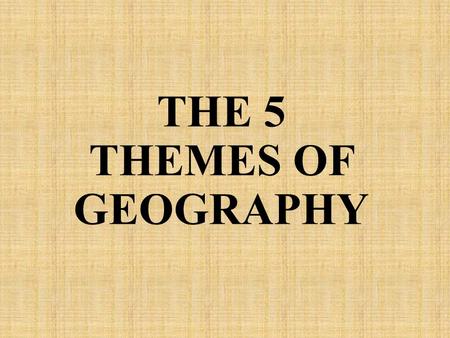 THE 5 THEMES OF GEOGRAPHY. Bell Work Where have you traveled to? What types of people did you see? List any environmental features you saw. 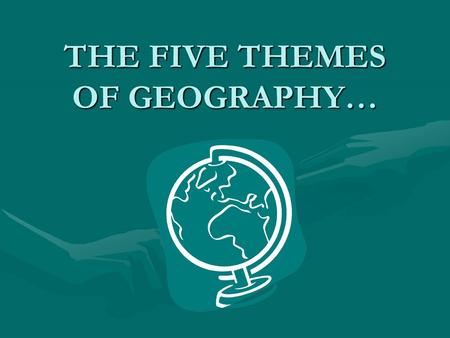 THE FIVE THEMES OF GEOGRAPHY… 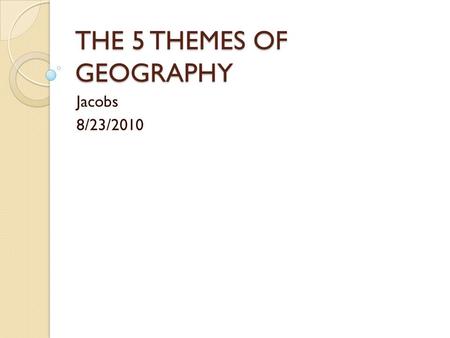 THE 5 THEMES OF GEOGRAPHY Jacobs 8/23/2010. What is geography? Geography- the study of the distribution and interaction of physical and human features.

Course Overview EdSc 143- Elements of Geography (3 hours lecture/week) Deals with man and his habitat. This includes the use of the world atlas, map reading. 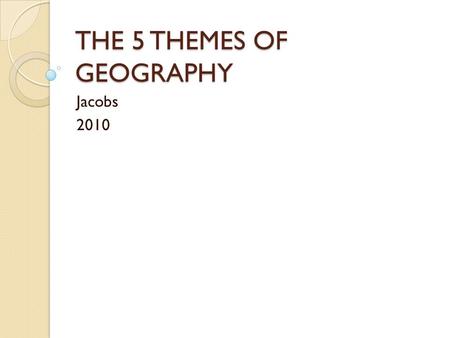 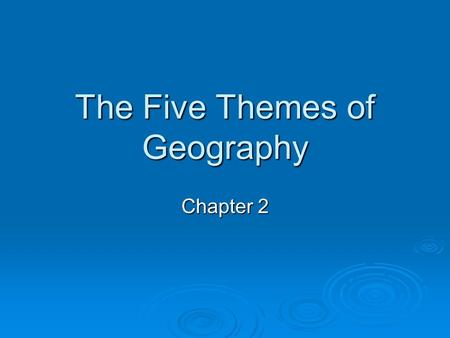 The Five Themes of Geography Chapter 2. What is Geography? ge·og·ra·phy 1 : a science that deals with the description, distribution, and interaction of. 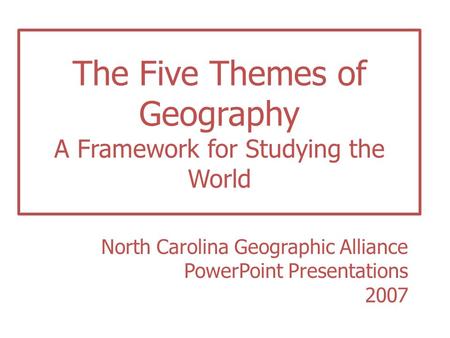 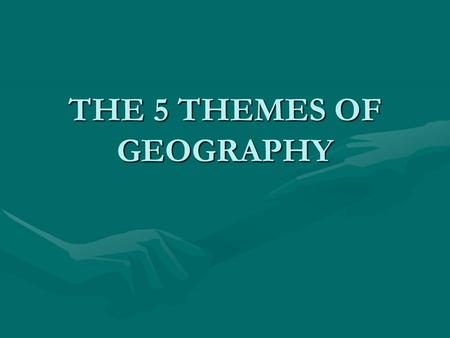 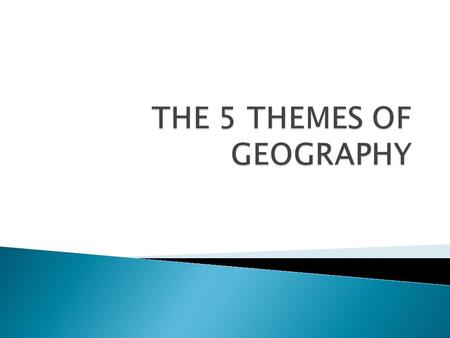 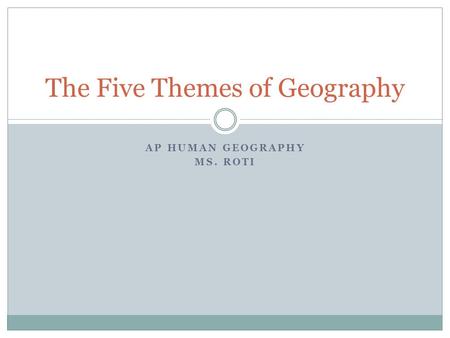 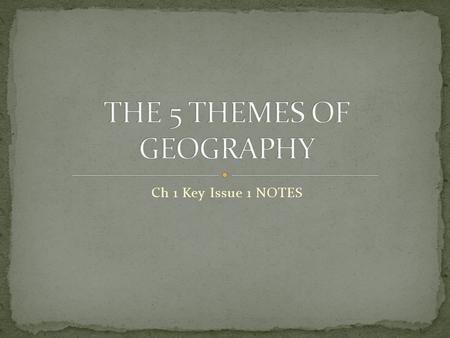 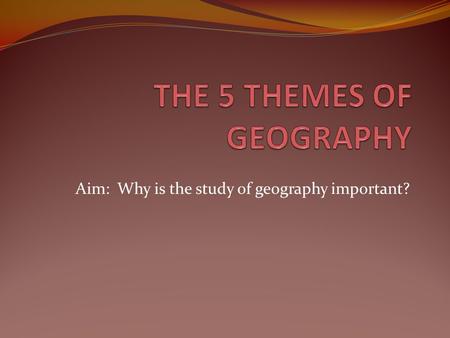 THE 5 THEMES OF GEOGRAPHY