3 Hardware of Computer Systems Motherboard: the primary printed circuit board in a PC All the other circuit boards in the computer are connected to motherboard CPU RAM chips Expansion cards Processor and coprocessor sockets Memory sockets Serial and parallel ports Peripheral controllers System bus by Li Ma3

4 Hardware of Computer Systems (cont’) The central processing unit (CPU) Fetch instructions, follow the instructions, and produce some results Control unit Arithmetic and logic unit (ALU) Main memory ( Random-access memory, RAM) It holds the sequences of instructions in the programs that are running and the data those programs are using It is a volatile type of memory, used only for temporary storage Data will be lost when power is off by Li Ma4

6 Hardware of Computer Systems (cont’) Others Modem: a communication device Video Card: an expansion card, responsible for transforming graphics and text signals onto the monitor Power Supply: responsible for converting the standard power into an energy form that your computer can use System Buses: channels over which information flows between two or more devices by Li Ma6

8 MS-DOS A set of programs that allows users to interact with a computer Once you turn on the computer, it will be loaded It has a command-line interface File and Directory Structure Tree-like Nodes: directories and files Windows 95 folded DOS into GUI (Graphical User Interface) Friendly interface Easier to operate by Li Ma8

11 Windows XP Windows refers to the operating system that runs the PC or PC-compatible computers It is loaded once you turn on the computer Desktop: the basic screen on which Windows and application run Taskbar, Shortcut icons, Start button, Quick-Launch toolbar, System tray, Mouse pointer A window is a rectangle area for some certain application It can be opened and closed It can also be resized, moved, and reduced to a button (to the task bar) by Li Ma11 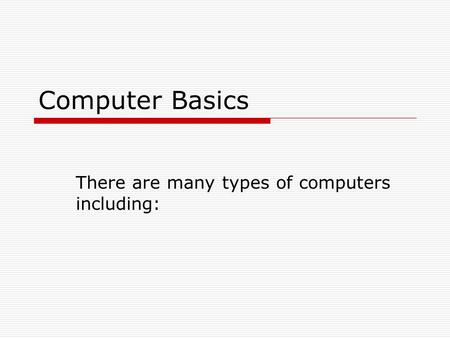 There are many types of computers including: 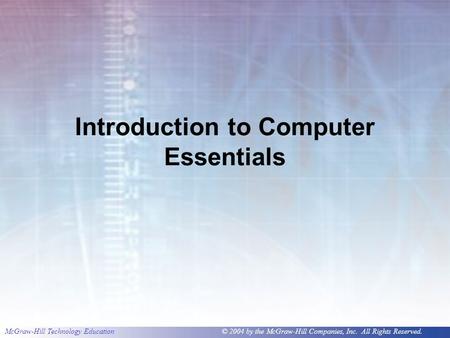