6.01 LEGAL AND ETHICAL RESPONSIBILITIES OF THE HEALTHCARE WORKER.

Presentation on theme: "6.01 LEGAL AND ETHICAL RESPONSIBILITIES OF THE HEALTHCARE WORKER."— Presentation transcript:

1 6.01 LEGAL AND ETHICAL RESPONSIBILITIES OF THE HEALTHCARE WORKER

3 LEGAL AND ETHICAL RESPONSIBILITIES Legal responsibilities are based on law and they must be followed. Federal, state and local governments enforce the laws. Healthcare workers must follow any laws that affect healthcare and they must also know and follow state laws that regulate their license or registration. (These are a set of standards for their profession to prevent a lawsuit.) Why? Following legal responsibilities will protect you, your employer and the patient.

6 *LEGAL AND ETHICAL RESPONSIBILITIES Tort: a wrongful act; a civil crime that does not involve a contract.

7 *COMMON TORTS :“bad practice”; “professional negligence”; the failure of a professional to use learned knowledge or skills and an injury occurs, or, there is loss or damage to the person receiving care. Malpractice (Ex.: a nurse performs surgery; the doctor accidentally cuts the patients bladder while removing the appendix.)

10 *COMMON TORTS : hitting, forcing against will, restraining movement, withholding food and/or water, not providing physical care. Physical abuse (Ex.: slapping a child because she keeps pulling on her I.V. dressing.)

14 *COMMON TORTS Defamation: False statements or incorrect information that causes the person to be ridiculed or damages their reputation. (Ex.: Assuming that someone in a car accident was drunk and they report that to the news media, but actually the accident was caused by a medical condition.)

16 *COMMON TORTS Slander: Spoken, incorrect information; lies. (Ex.: Telling your friends that your neighbor is having a wild party and actually her church youth group is at her house cooking for a homeless shelter.) Defamation:

17 *COMMON TORTS Libel: Written, incorrect information; lies. Defamation: (Ex: A dentist writes a letter to a newspaper editor claiming that a patient is a big baby and never pays his bills.)

18 *COMMON TORTS Negligence: Ex.: Improper use of a heat pack or hot water and the patient gets burned, leaving side rails down on bed, or leaving arm rests up on dental chair) Failure to give normally expected care which results in injury to a person. (Ex.: Patient falls out of the bed because the side rails were not put up)

19 *COMMON TORTS Assault and Battery: is the threat or attempt to injure. Assault: (Example of assault: threatening to hit a patient if the patient doesn’t cooperate.)

20 *COMMON TORTS Assault and Battery:  Battery: is the unlawful touching of a person without consent. (Example of battery: A EMT forces an accident victim into the ambulance when the victim told the EMT that he didn’t need help and he didn’t want the EMT to touch him.)

21 *COMMON TORTS Unnecessarily exposing an individual; revealing personal information without consent. Invasion of Privacy: (Ex.: Improperly uncovering a patient during a procedure and leaving the door open; taking a famous person’s picture (Miley Cyrus) and selling it to the newspaper without her consent.

22 *COMMON TORTS INVASION OF PRIVACY: STD Ex.: Leaving a patient’s record open and a visitor sees that the patient has an STD.

23 restraining an individual or restricting an individual’s freedom. *COMMON TORTS False Imprisonment: (Ex.: Keeping patients hospitalized against their will, or applying physical restraints without proper authorization.) *Must have physician’s order for restraints

Download ppt "6.01 LEGAL AND ETHICAL RESPONSIBILITIES OF THE HEALTHCARE WORKER." 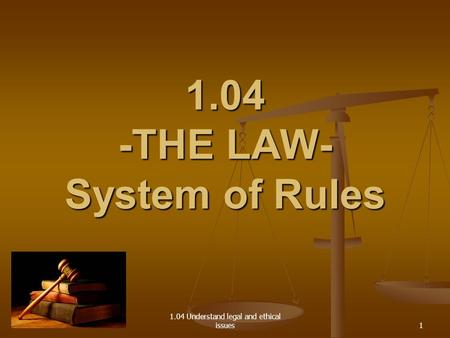 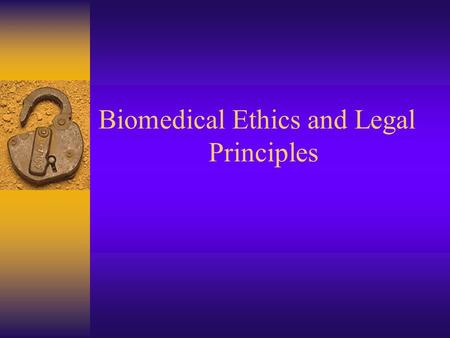 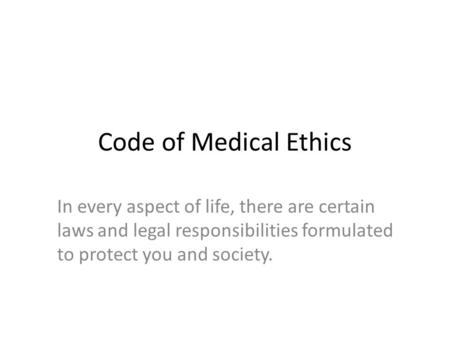 Code of Medical Ethics In every aspect of life, there are certain laws and legal responsibilities formulated to protect you and society. 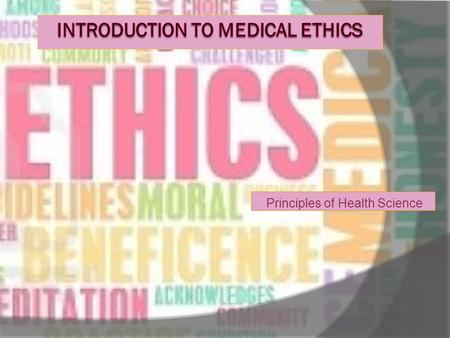 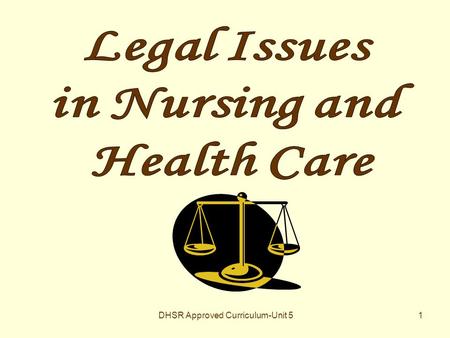 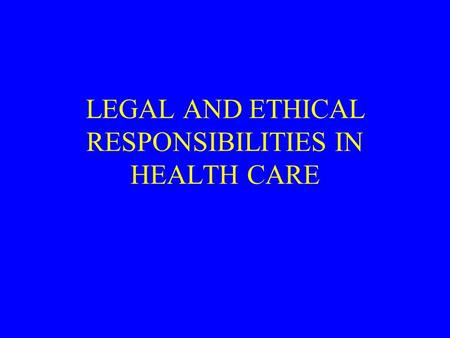 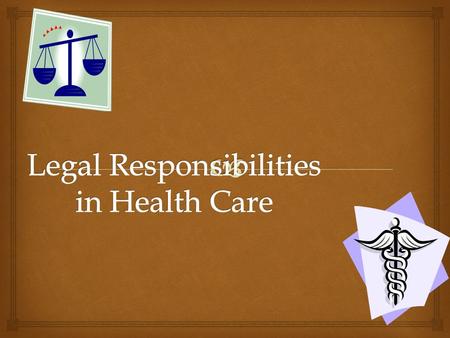 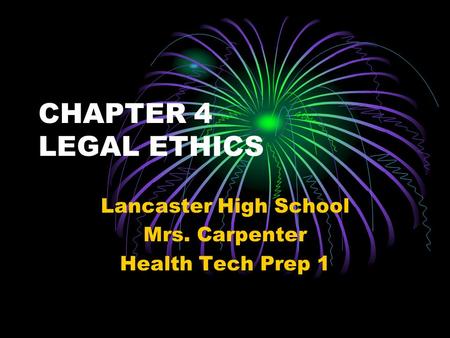 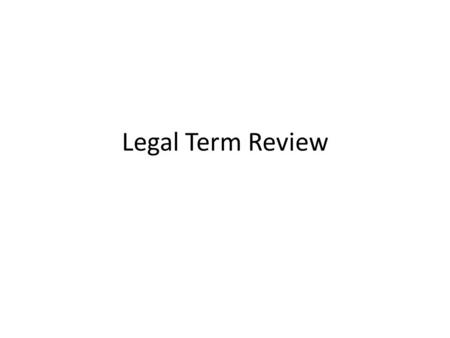 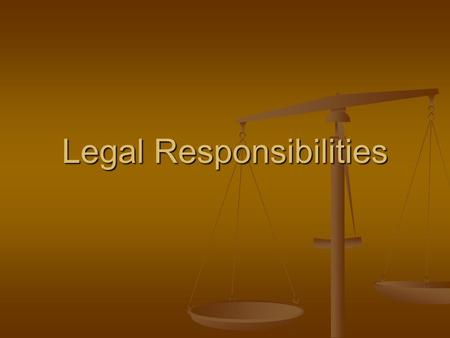 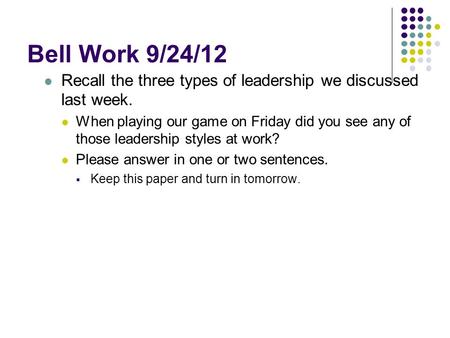 Bell Work 9/24/12 Recall the three types of leadership we discussed last week. When playing our game on Friday did you see any of those leadership styles. 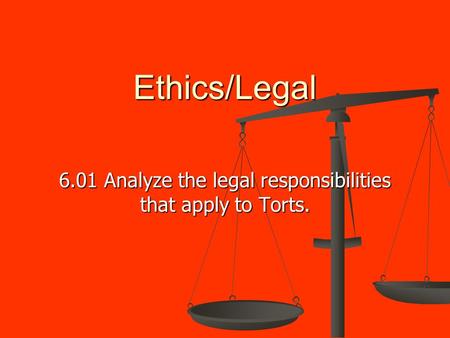 6.01 Analyze the legal responsibilities that apply to Torts. 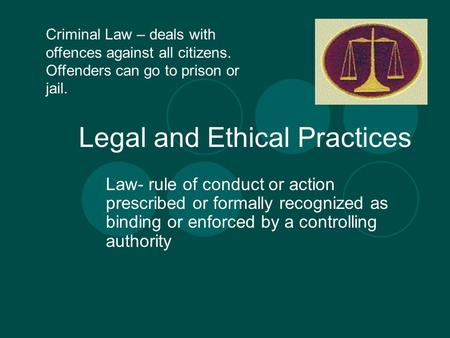 Legal and Ethical Practices Law- rule of conduct or action prescribed or formally recognized as binding or enforced by a controlling authority Criminal. 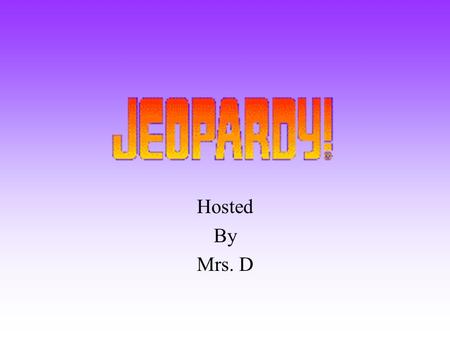 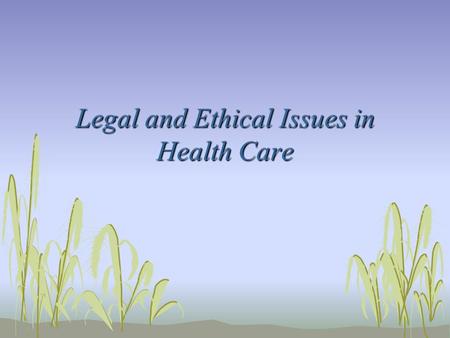 Legal and Ethical Issues in Health Care. Legally Speaking… Malpractice: “professional negligence” Defined as: failure of a professional to use the degree. 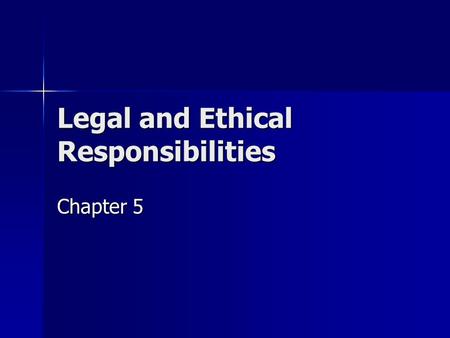 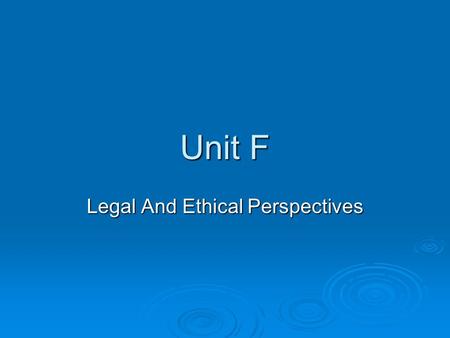 Unit F Legal And Ethical Perspectives. Malpractice  Any bad practice that is given by any health care provider to a patient. 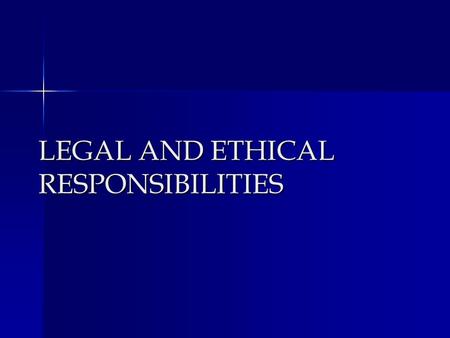 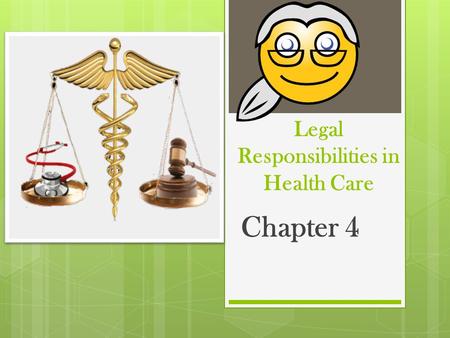 Legal Responsibilities in Health Care Chapter 4. Introduction 10/24/2015  Every aspect of our life is governed by certain laws or legal responsibilities. 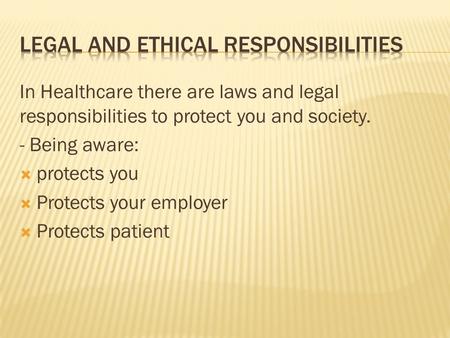 In Healthcare there are laws and legal responsibilities to protect you and society. - Being aware:  protects you  Protects your employer  Protects patient.