3 Why It’s Important Learning how to apply ethical principles will help you make ethical decisions.

4 Pre-Learning Question
How do you make ethical decisions?

5 How Ethical Decisions Are Made
Determining the difference between right and wrong can be difficult. Individuals use different methods to choose the right thing to do in any given situation.

6 How Ethical Decisions Are Made
Morality involves the values that govern a society’s attitude toward right and wrong. Ethics, in contrast, are the means for determining what a society’s values ought to be.

7 How Ethical Decisions Are Made
Throughout your life, you will face many ethical problems. Adopting a consistent ethical standard can help you with big or small moral problems.

8 Feelings and Opinions Some people base their ethical standards on whether or not the act “feels” right.

9 The Greatest Good Some people feel that an action that creates the greatest good for the greatest number of people is a sound basis for making ethical decisions. Example 2 – page 7

11 Ethical Character Traits
Honesty is being open and truthful with other people. Justice is treating other people fairly and equally.

12 Ethical Character Traits
Compassion is being sympathetic to the difficulties of others. Integrity is doing what is right regardless of personal consequences.

13 Describe the characteristics of justice.

15 Pre-Learning Question
How do you think ethics relates to law?

16 The Relationship Between Ethics and Law
If everyone made the same ethical decisions with the same results, there would be no need for law. In the real world, however, some people engage in conduct that most people agree is wrong.

17 Why Law Is Necessary Law is the system of rules of conduct established by the government of a society to maintain stability and justice.

19 Ethics and Legal Conflicts
Because law is made by people, it is imperfect. Legislators and judges bring their own personal opinions on ethics to the lawmaking process. As a result, ethics and law will sometime conflict. Example: Obey the Ethics of journalism by refusing to identify the source of the story, however refused to obey the legal order of a judge to identify the source.

21 ANSWER Law is the rules of conduct established by the government of a society to maintain stability and justice. End of Section 1.1

23 Why It’s Important Learning how the law is made will help you make decisions regarding your legal responsibilities.

25 Constitutional Law A country’s constitution spells out the principles by which the government operates. In our country, the most fundamental law is the U.S. Constitution

26 The U. S. Constitution sets forth the fundamental rights of citizens
defines the limits within which the federal and state governments may pass laws describes the functions of different branches and divisions of our national government

27 The U. S. Constitution consists of 7 articles and 27 amendments
the articles establish the national government the amendments outline the rights of the people The constitution was ratified in 1787 (Articles of Confederation and US Constitution)

29 Amendments First 10 are called Bill of Rights
limit the power of the government The basic purpose is to protect two kinds of rights. rights of individual liberty rights of persons accused of crimes The other 17 amendments are revisions made to the constitution.

30 State Constitutions Each state has its own constitution
Not identical to the federal Constitution Can be more protective, narrow, and more restrictive

31 Common Law In the early days of English history, judges traveled in circuits around England deciding cases. Because there was no written law, judges made decisions based on customs and traditions.

32 Common Law Judges shared their decisions with other judges.
They tried to share the same law “in common” with everyone else throughout the country. This practice formed the basis of common law.

33 Precedent Common law led to the doctrine of precedent, which means a judge is required to follow an earlier court decision when deciding a case with similar circumstances. Stare decisis means “let the decision stand.”

34 Precedent What rules are established in your home because it follows a precedent? What “laws” exist between parents and children?

35 How many amendments are there to the U.S. Constitution?

37 Statutory Law Statutes are laws specifically passed by a governing body, such as the U.S. Congress, state legislatures, and city councils.

40 Statutory Law Federal and state statutes cannot conflict with the U.S. Constitution, or they may be ruled unconstitutional, or invalid by the Supreme Court.

42 Administrative Regulations
Legislatures often give the power to regulate a particular kind of activity to an administrative, or regulatory, agency. (i.e. FCC, FDA, FTC) Administrative law consists of those rules and procedures established by regulatory agencies.

43 Sunflower City passed an ordinance that requires all commercial signage to incorporate a sunflower into the design. What is the source of this law? 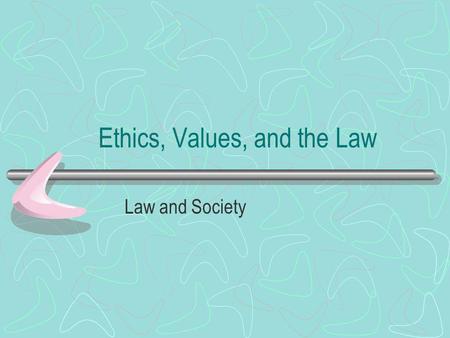 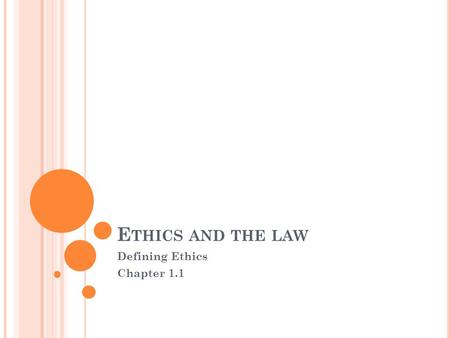 E THICS AND THE LAW Defining Ethics Chapter 1.1. H OW E THICAL D ECISIONS ARE M ADE The difference between right and wrong can be difficult to determine. 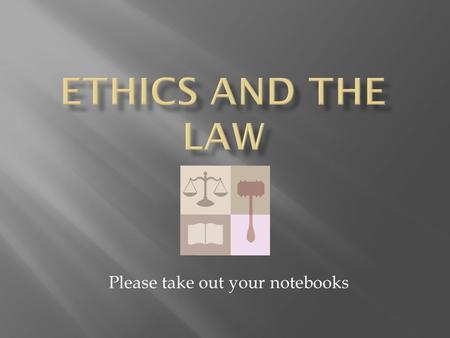 Please take out your notebooks.  Take a moment to write down in your Do Now section what you think ethics are  Where do you think are the sources for. 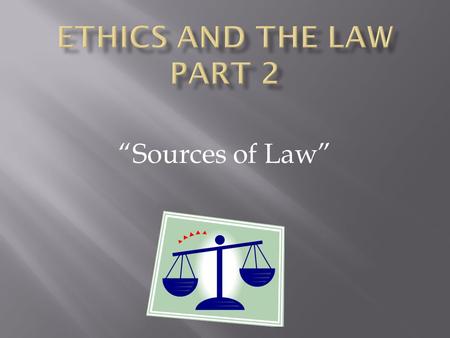 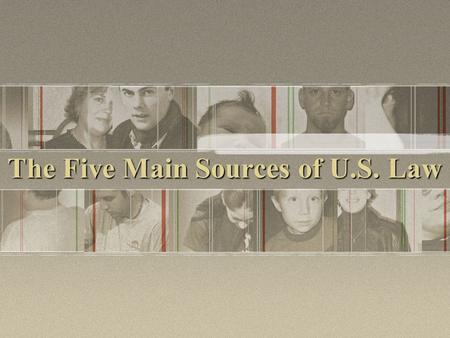 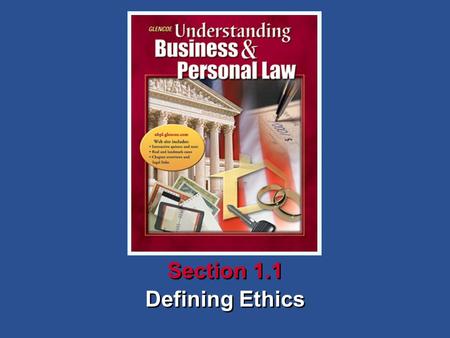 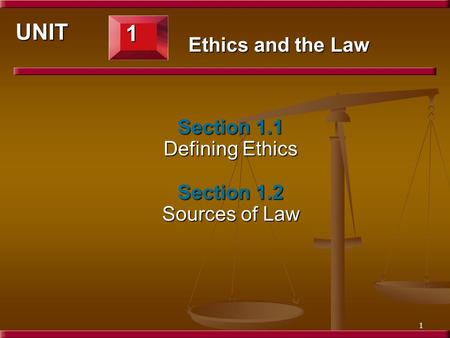 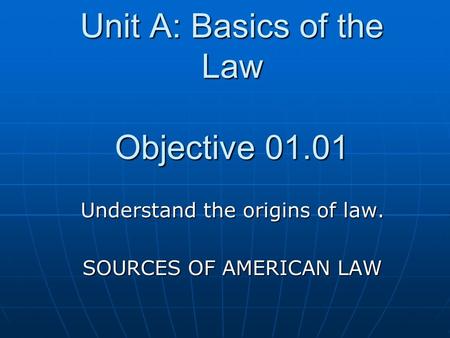 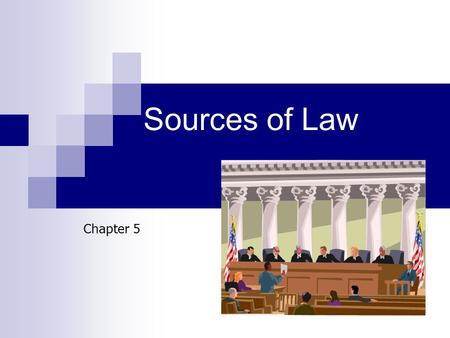 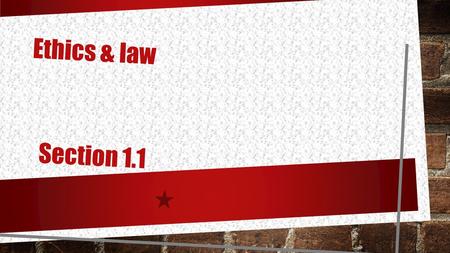 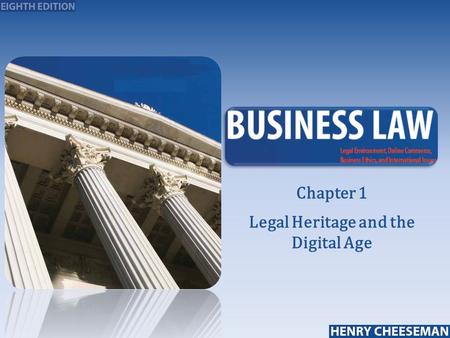