1 Forces and The Laws of Motion
Chapter 4

4 Force Force is, an action exerted on an object which changes the object’s state of rest or motion. Force can cause an acceleration The SI unit of force is a Newton (N). A newton is dervived from the units of mass (kg) and acceleration (m/s2). 1 N = 1 kg • m/s2 Clip 310 Forces can act through contact or at a distance. Contact forces result from physical contact between two objects. Pulling a wagon Catching a football Field forces does not involve contact The force of gravity is an example of field force. Clip 512

5 Force Diagrams Force is a vector.
It depends on the magnitude and the direction of the force Diagrams that show force vectors as arrows are called a force diagram. The force vector points in the direction of the force. Its length is proportional to its magnitude Assume that all forces act on the center of the object No matter where the force is applied A free-body diagram helps analyze a situation Used to analyze only the forces affecting the motion of a single object Show clip 566

8 Free-body Diagram Sample Problem
Draw a free body diagram for a person pulling a sled. The magnitudes of the forces acting on the sled are 60 N by the string, 130 N by the earth, and 90 N upward by the ground. F ground F string F earth

12 Newton’s First Law An object at rest remains at rest, and an object in motion remains in motion with constant velocity unless the object experiences a net external force. Sometimes referred to as the law of inertia. Inertia is the tendency of an object to resist change in motion. Mass is the measure of inertia Show Clip 589 First Law says that when the net force on an object is zero the objects acceleration is also zero. The sum of the forces acting on an object is the net force. Although several forces are acting on this car, the vector sum of the forces is zero. Thus, the net force is zero, and the car moves at a constant velocity.

13 Determining Net Force Define the problem, and identify the variables
Select a coordinate system, and apply it to the free body diagram Find the X and Y components of all vectors Find the net force in the x and y directions Find the net force.

14 Sample Problem B Derek leaves his physics book on top of a drafting table that is inclined at a 35° angle. The free body diagram at the right shows the forces acting on book. Find the net force acting on the book. F friction = 11N F table on book = 18 N F gravity on book = 22 N

18 Section Objectives Describe an object’s acceleration in terms of its mass and the net force acting on it. Predict the direction and magnitude of the acceleration caused by a known net force Identify action-reaction pairs

20 Sample Problem C Roberto and Laura are studying across form each other at a wide table. Laura slides a 2.2 kg book towards Roberto. If the net force acting on the book is 1.6 N to the right, what is the books acceleration? Given: m = 2.2 kg F = 1.6 N to the right Unknown: a = ?

21 Newton’s Third Law Forces always work in pairs.
Newton’s third laws says: If two objects interact, the magnitude of the force on object 1 by object 2 is equal to the magnitude of the force simultaneously exerted on object 2 by object 1, and these two forces are opposite in direction. This is more commonly heard as: For every action there is an equal but opposite reaction.

22 Third Law con’t. If forces are equal why don’t they cancel each other out? Action-reaction pairs do not imply that the net force on either object is zero. The action-reaction forces are equal and opposite, but either object may still have a net force on it. Consider driving a nail into wood with a hammer. The force that the nail exerts on the hammer is equal and opposite to the force that the hammer exerts on the nail. But there is a net force acting on the nail, which drives the nail into the wood.

23 Third Law con’t. Remember the forces are acting on different objects.
Also there may be a mass difference between the two objects. See Clip 715

26 Section Objectives Explain the difference between mass and weight
Find the direction and magnitude of normal forces Describe air resistance as a form of friction Use coefficients of friction to calculate frictional force.

27 Weight Weight is the measure of the force of gravity, Fg.
Because of Newton’s 2nd Law, F=ma, we can calculate weight as: Fg = mag Fg – Force of gravity (weight) ag – acceleration due to gravity, 9.8 m/s2

28 The Normal Force Imagine a television set at rest on a table.
Why doesn’t the television set continue to fall through the table? Forces are in equilibrium. But what force opposes the force of gravity? The Normal force. (Fn) A force that acts on a surface in a direction perpendicular to the surface. The normal force is always perpendicular to the surface. See Clip 592 Fn Fg

29 Normal Force con’t. The normal force is not always opposite of the force of gravity, as shown by the picture of a refrigerator on a ramp. Fn θ θ Fg

31 Coefficient of friction
The quantity that expresses the dependence of frictional forces on the particular surfaces in contact. It is represented by the Greek letter mu, .

34 Sample problem D A 24 kg crate initially at rest on a horizontal floor requires a 75 N horizontal force to set it in motion. Find the coefficient of static friction between the crate and the floor. Given Fs,max = Fapplied = 75 N m = 24 kg s = ? Equation s = Fs,max/Fn Fn = crates weight = mg

35 Air Resistance Air resistance is a form of friction. Whenever an object moves through a fluid medium, such as air or water, the fluid provides a resistance to the object’s motion. For a falling object, when the upward force of air resistance balances the downward gravitational force, the net force on the object is zero. The object continues to move downward with a constant maximum speed, called the terminal speed. 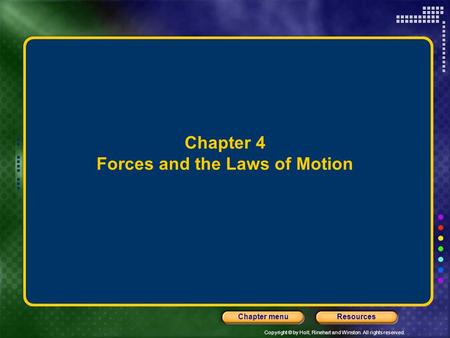 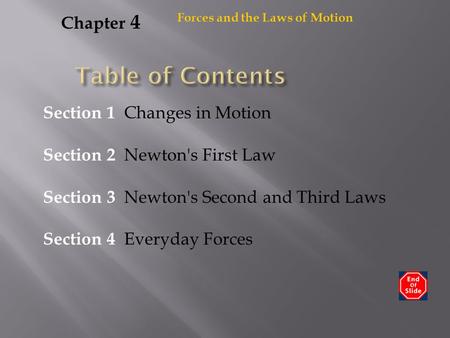 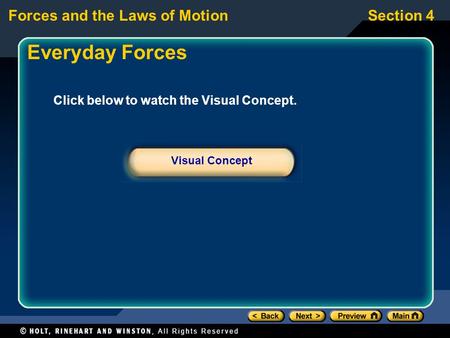 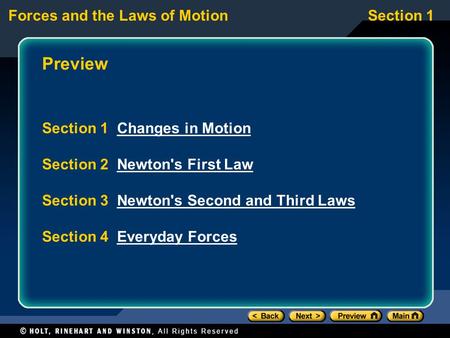