2 1 - $100 Name one of the qualifications that was eliminated in the first stage of extending suffrage? Religious, property, and tax qualifications began to disappear in every state (early 1800s)

4 1 - $300 How did the 24th Amendment change voting requirements in the states? It ended the poll tax as a requirement to vote.

6 1 - $500 What is the 23rd Amendment?
Adds the voters of the District of Columbia to the presidential electorate.

7 2 - $100 Literacy tests used in the South threatened to keep white males from voting, as well as African Americans. What did these southern states do to make sure that white males who couldn’t read could still vote? States added a grandfather clause to their constitutions. This said that anyone who had voted before the 15th amendment (1870), or his male descendants, could become a legal voter.

8 2 - $200 Which federal law passed in 1993 was intended to make voter registration easier? Motor Voter Law Requires every state to allow all eligible voters to register to vote when they apply for or renew a driver’s license; provides for voter registration by mail; and makes registration forms available at state employment offices and social service agencies.

9 2 - $300 What are the three universal requirements for voting in the United States? Citizenship, legal residency, age

12 3 - $100 Violence following Dr. Martin Luther King Jr.’s voter registration drive in Selma led to which act of Congress? Voting Rights Act of 1965. In early 1965, Dr. King mounted a voter registration drive in Selma, Alabama. These efforts were met with violence—three civil rights workers were murdered and many beaten. This led to President Johnson to urge Congress to pass new and stronger legislation to protect voting rights of African Americans.

14 3 - $300 The United States Commission on Civil Rights was set up by which act of Congress? Civil Rights Act of 1957. This group investigated all claims of voter discrimination.

15 3 - $400 What did the Civil Rights Act of 1960 do to help enforce voting rights? Federal referees could investigate discrimination.

17 4 - $100 The “time-zone fallout” problem is most likely to discourage voter turnout where? West

19 4 - $300 What is the main reason for nonvoting? Lack of interest.
Although inconvenient registration requirements, bad weather, and time-zone fallout may all discourage voter turnout, the chief cause is simply lack of interest. These people are usually uninformed.

20 4 - $400 The single most significant and lasting predictor of how a person will vote is…? Party identification

22 Final Jeopardy Which is the only state that does not require voters to register? North Dakota 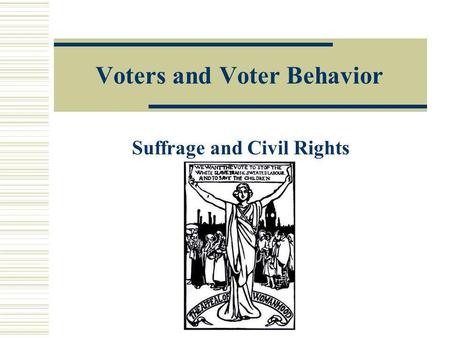 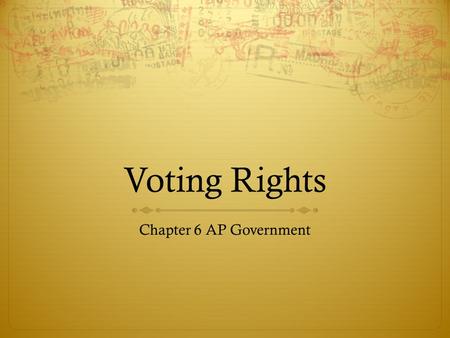 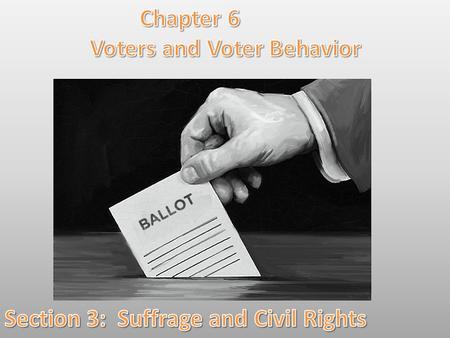 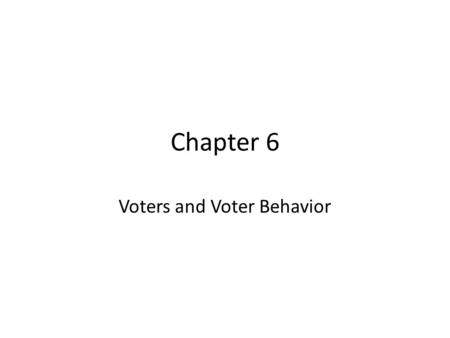