3  Made up of two layers:  (1) Epidermis (superficial epithelium), and Dermis (underlying connective tissue)  (2) Accessory structures – Including hair, nail, exocrine glands. Located mostly in the dermis and protrude into the epidermal layer  (3) Subcutaneous layer deep to the dermis is known as the hypodermis; often not considered part of the integumentary system, but because its fibers extend into the dermis, we will include it here

7  Keratinocytes make up five layers of thick skin, and four layers in thin skin  Thick skin is found in the palms of your hands and soles of your feet  Thin skin is found everywhere else in your body  Thick and thin refer to the thickness of the epidermal layer

9  Stratum germinativum, also known as stratum basale, is the bottom most layer of skin  Epidermal ridges are found here, and they extend into the dermis.  Projections called dermal papillae creates an interlocking arrangement that increases the strength of the bond between the dermal and epidermal layers

11  The contours of the skin surface follow the ridge patterns  Ridges on the palms and soles of feet increase the skin’s surface area and friction, helping to maintain grip  Ridge shapes are genetically determined, unique to you, and do not change throughout your life  Ridge prints located on your fingers are called fingerprints

13  Melanocytes are pigment cells that give skin its color; they are also found in this layer

15  Known as the “grainy layer”  By the time the cells reach this layer, they have stopped dividing and now begin to make lots of the protein keratin  Keratin makes up our hair and nails

17  Top layer of epidermis; consists of 15-30 layers of cells  Keratinization or cornification, is the formation of protective, superficial layers of cells made of keratin  Dead layers of cells so tightly connected that when they slough off they separate as sheets of cells

19  A dry layer, so few microorganisms can survive here  Layer is water resistant, but not waterproof. Water from inside the body slowly penetrates to the surface where it is evaporated. We lose ~500mL (1 pint) of water/day  This process is called insensible perspiration  If this layer is damaged or lost (as in burns), the rate of water loss dramatically increases and you are at risk of dehydration

20  Recall from biology that freshwater will move into cells, causing them to SWELL  This is why when you take a bath your hands swell and look like raisins  Likewise, water will leave cells if placed in highly concentrated solutions, like oceanwater  Although the process occurs slowly, it will accelerate the dehydration process in shipwreck survivors After 51 hours of exposure to seawater and wearing gloves 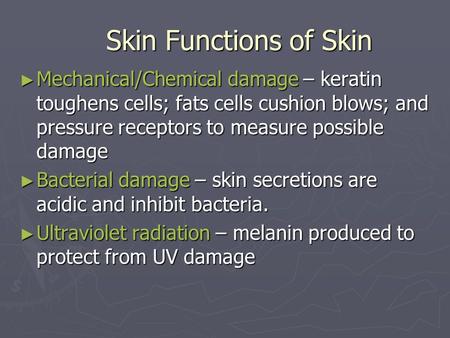 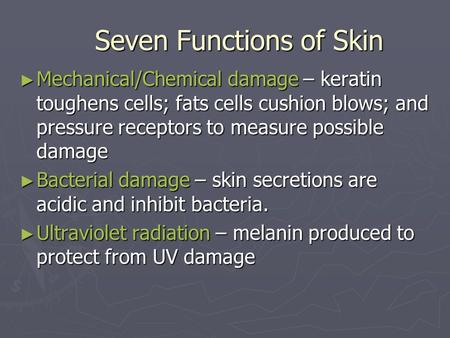 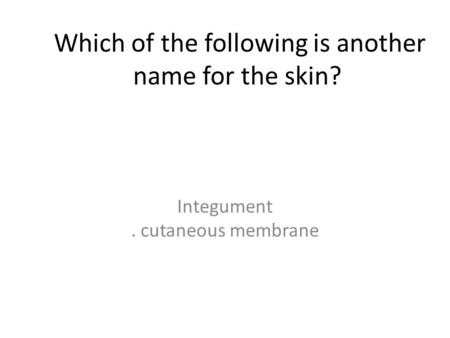 Which of the following is another name for the skin? 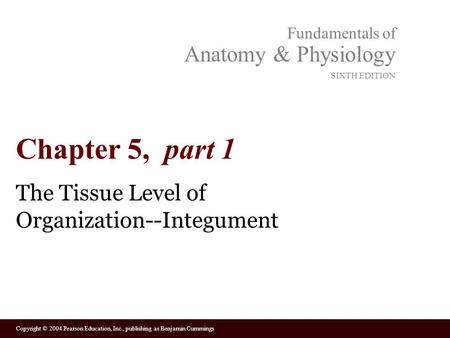 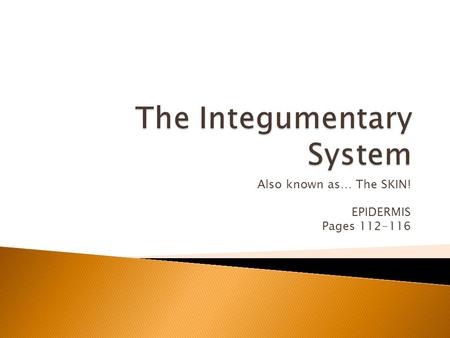 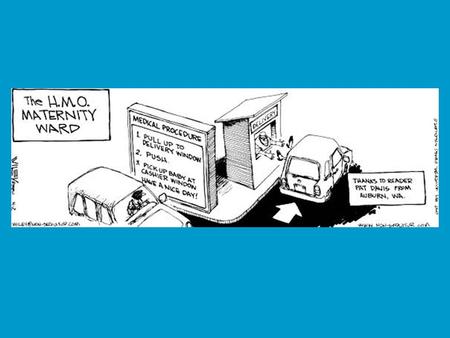 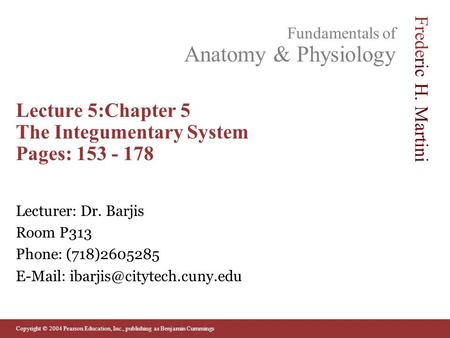 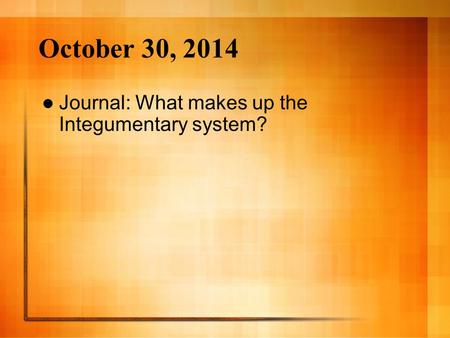 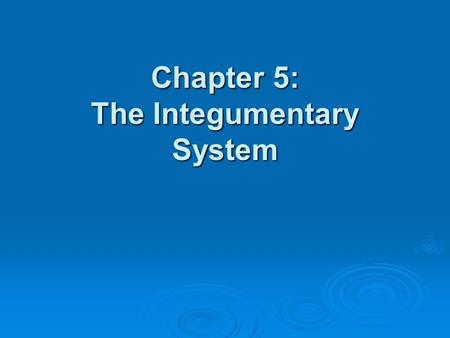 Chapter 5: The Integumentary System.  What are the structures and functions of the integumentary system? 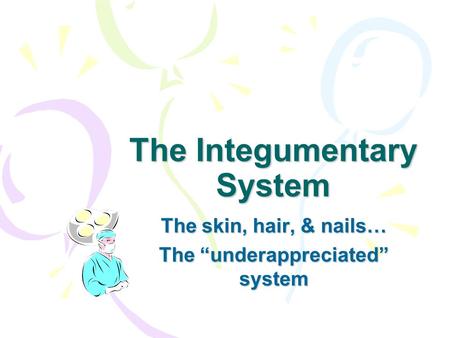 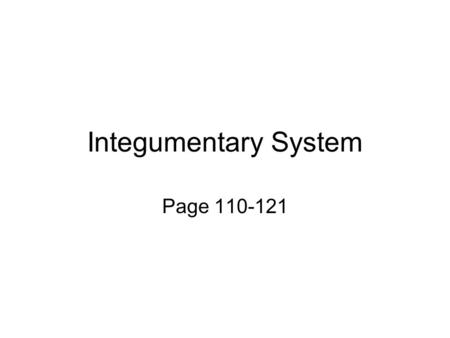 Integumentary System Page Integument Two major components A. Cutaneous membrane – is an organ composed of the superficial epithelium or epidermis. 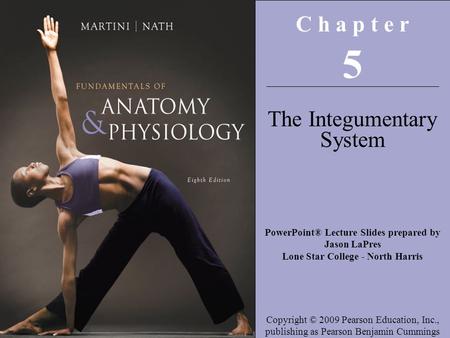 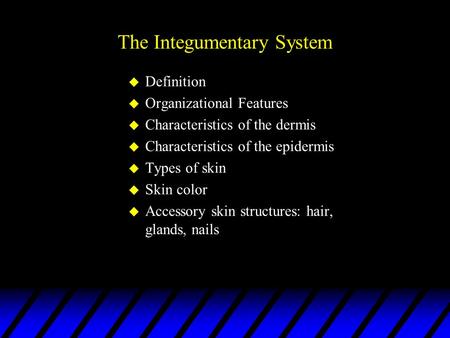 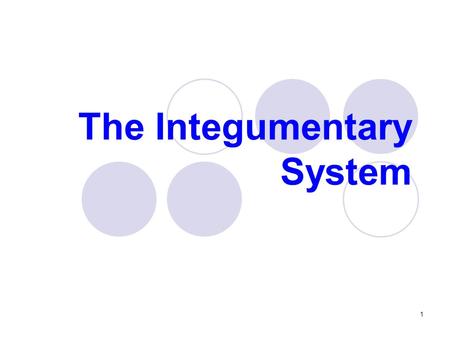 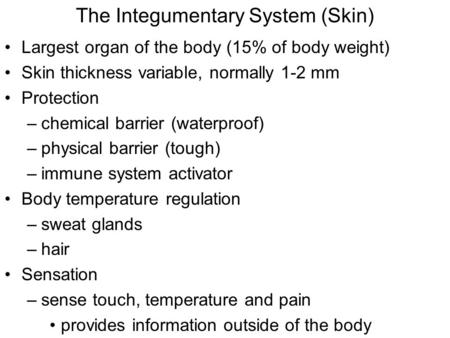 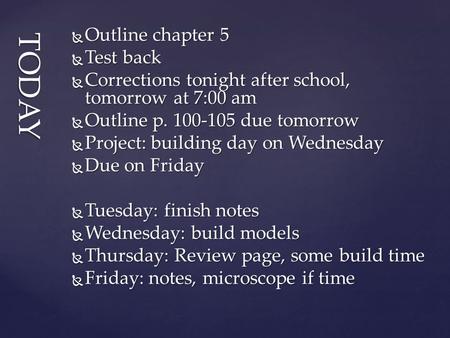 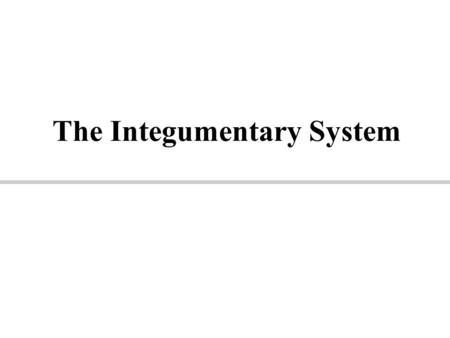 The Integumentary System. Learning Objectives List the components of the integumentary system, including their physical relationships. Specify the functions. 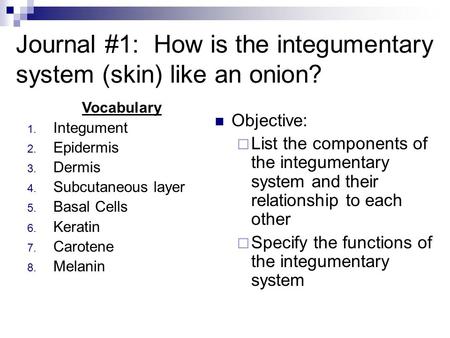 Journal #1: How is the integumentary system (skin) like an onion? 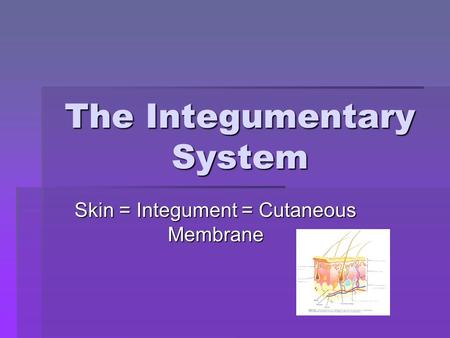 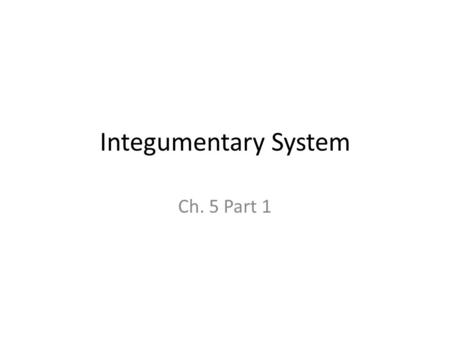