Presentation on theme: "How does one differentiate between transverse and longitudinal waves?"— Presentation transcript:

1 How does one differentiate between transverse and longitudinal waves?
7.11.6

2 Wave Waves are a disturbance that transfers energy from place to place. Waves can be Transverse, Longitudinal (Compressional), or Electromagnetic.

3 Types of waves: Waves are classified according to how they move.

4 Mechanical Waves Waves are created when a source of energy causes a medium to vibrate. A vibration is a repeated back and forth or up and down motion.

5 Mechanical Waves Can be transverse or longitudinal.
All mechanical waves need a material medium to shake vibrate. The wave medium is not the wave and it doesn't make the wave; it merely carries or transports the wave from its source to other locations. A medium can be a gas, liquid, or solid.

6 What type of mechanical wave is this?

9 What type of mechanical wave is this?

15 The straight line that runs from A to G is called what?

21 Electromagnetic Waves
There are different types of electromagnetic waves Radio waves Infrared waves Visible light waves Ultraviolet light waves X-rays Gamma rays These waves can travel through air, through the walls of your house, and even to your TV and radio.

29 Wavelength A wave travels a certain distance before it starts to repeat. The distance between two corresponding parts of a wave is its wavelength. Transverse measure from crest to crest or trough to trough. Longitudinal measure from one compression to the next.

30 Frequency The number of complete waves that pass a given point in a certain amount of time. AKA number of vibrations per second. Frequency measured in hertz (Hz).

31 Speed The speed, wavelength, and frequency of a wave are related to each other by a mathematical formula. Speed = wavelength x frequency Frequency = speed/wavelength Wavelength = speed/frequency

32 Speed Waves in different mediums travel at different speeds. However, in a given medium and under the same conditions the speed of the wave is constant.

35 Reflection When an object or wave hits a surface through which it cannot pass, it bounces back. Angle of incidence Angle of reflection

36 Examples of reflection
Mirror Echo Ball against a wall

37 Refraction is when a wave moves from one medium into another medium at an angle, it changes speed as it enters the second medium which causes it to bend. The bending of waves due to a change in speed is called refraction.

38 Refraction Though all waves change speed when they enter a new medium. Bending occurs when one side of the wave enters the new medium before the other side

39 Diffraction When a wave passes a barrier or moves through a hole in a barrier it bends and spreads out.

43 Nodes and Antinodes Nodes: at certain points, destructive interference causes the two waves to combine and produce an amplitude of zero. Antinodes are the points of maximum energy. The crests and troughs of a standing wave.

Download ppt "How does one differentiate between transverse and longitudinal waves?" 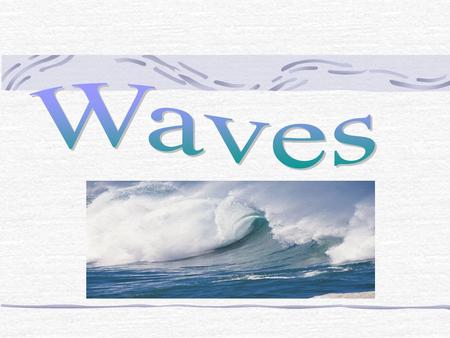