2 Water Pollution Water pollution is the introduction of chemical, physical, or biological agents into water that degrade water quality and adversely affect the organisms that depend on the water The two biggest causes of water pollution are industrialization and human population growth To prevent pollution, people must know from where water pollution comes

9 Wastewater Treatment Process
Filtration: Wastewater is passed through a large screen to remove solid objects. First settling tank: Wastewater is sent into a large tank, where smaller particles sink to the bottom and form sewer sludge. The sludge is removed from the water. Aeration tank: Wastewater is mixed with oxygen and bacteria. The bacteria use the oxygen and feed on the wastes. Second settling tank: Bacteria grown in the aeration tank, as well as other solid wastes, are removed in the form of sludge. Chlorination: chlorine is added to disinfect the water before it is released into a stream, lake, or ocean.

10 Treating Wastewater Most of the water used in homes contains biodegradable material that can be broken down by living organisms Wastewater from toilets and kitchen sinks contain animal and plant waste, paper, and soap all of which re biodegradable Wastewater treatment plants may not remove all of the harmful substances in water

11 Sewage Sludge One of the products of wastewater treatment is sewage sludge, the solid material that remains after treatment If sludge contains toxic chemicals, it must be disposed of as hazardous waste Sludge is often incinerated and the ash buried in a landfill The problem of sludge disposal has led many communities to look for new uses for this waste such as fertilizer or mixing with clay to make bricks

12 Artificial Eutrophication
Most nutrients in water come from organic matter, such as leaves, that is broken down into mineral nutrients Nutrients are essential, but an over abundance can disrupt an ecosystem When slow moving water contains an abundance of nutrients it is eutrophic The natural process of eutrophication is accelerated when inorganic plant nutrients enter the water from sewage and fertilizer runoff Eutrophication caused by humans is called artificial eutrophication

13 Thermal Pollution When the temperature of a body of water increases, thermal pollution can happen It can occur when power plants and other industries use water in their cooling systems and then discharge the warm water into a lake or river The warm water reduces the amount of available oxygen causing aquatic organisms to suffer

15 Cleaning up Groundwater Pollution
One of the most challenging environmental problems faced because even if it stopped today, it would still be polluted for generations Reasons for this are it takes a long time for groundwater to recharge and pollution can cling to the materials that make up an aquifer

16 Ocean Pollution Pollutants are often dumped directly into the oceans
85% of ocean pollution comes from activities on land Sensitive coastal ecosystems, such as coral reefs, estuaries, and coastal marshes, are the most affected by pollution

17 Oil Spills Each year approximately 37 million gallons of oil from tanker accidents are spilled into the oceans Oil spills have dramatic effects, but they only account for 5% of oil pollution in the ocean. Most comes from cities and towns million gallons enter the ocean from nonpoint-sources on land

18 Water Pollution and Ecosystems
Water pollution can cause immediate damage to an ecosystem, and the effects can be far reaching. Many pollutants accumulate because they do not decompose quickly. Polluted soil settles at the bottom of a river where it is eaten by insect larvae which are eaten by fish which are eaten by birds... This buildup of pollutants at higher levels of the food chain is called biomagnification. Biomagnification has alarming consequences for organisms at the top of the food chain. Many states limit the amount of fish that can be eaten from certain bodies of water because of biomagnification.

19 Cleaning Up Water Pollution
In 1969, the Cuyahoga River in Cleveland, OH, was so polluted it caught on fire and burned for days. This led to the passing of the Clean Water Act of It's purpose was to restore and maintain the chemical, physical, and biological integrity of the nation's waters. The goal was to make surface water clean enough for fishing and swimming by 1983. Although the goal was not achieved, much progress was made.

20 Federal Laws to Improve Water Quality
1972--Clean Water Act--surface water fit for swimming and fishing by 1983 and banned pollutant discharge into surface water after Metals are to be removes from wastewater. 1972--Marine Protection Research and Sanctuaries Act--empowered EPA to control the dumping of sewage wastes and toxic chemicals in U.S. waters. 1975--Safe Drinking Water Act--introduced programs to protect groundwater and surface water from pollution. Emphasized sound science and risk-based standards for water quality. 1980--Comprehensive Environmental Response Compensation and Liability Act-- Superfund Act--makes owners, operators, and customers of hazardous waste sites responsible for the cleanup of the sites. This act has reduced the pollution of groundwater by toxic substances leaching from hazardous waste dumps. 1987--Water Quality Act--supports state and local efforts to clean polluted runoff. 1990--Oil Pollution Act--attempts to protect U.S. waterways from oil pollution by requiring that oil tankers in U.S. waters be double-hulled by 2015. 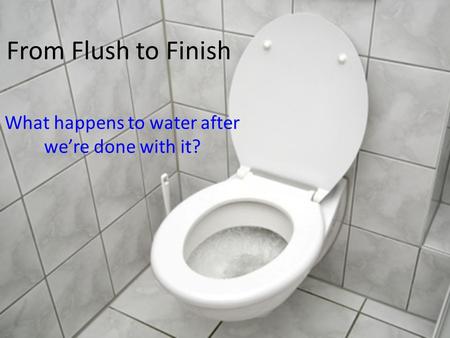 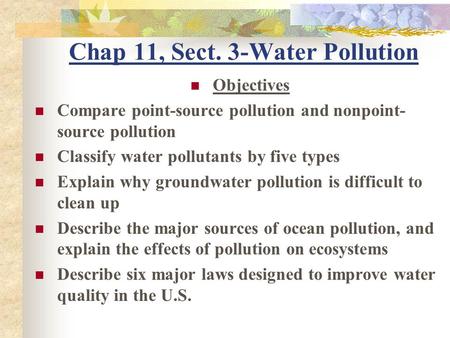 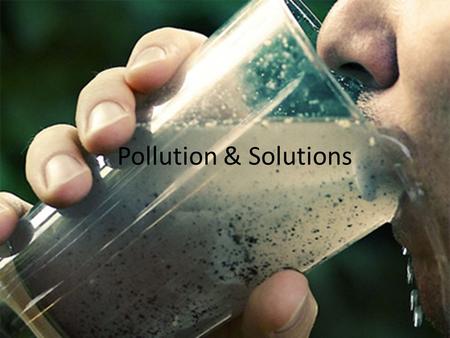 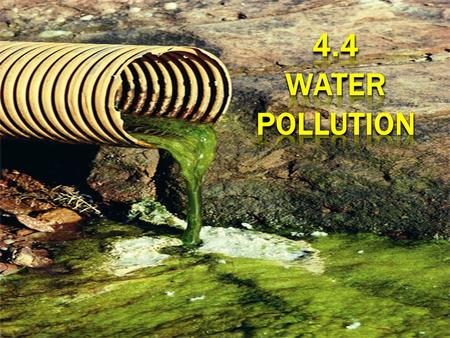 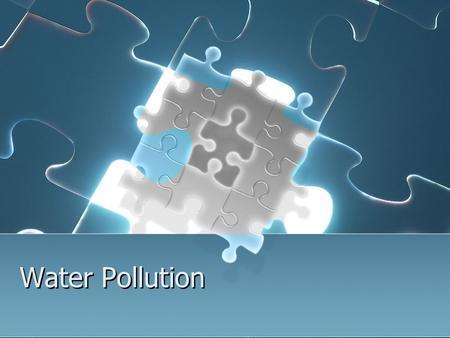