Presentation on theme: "Warm Up – December 17 What kind of stress occurs at a divergent boundary? What type of fault is it? What landform is created? Tension Normal Fault Fault."— Presentation transcript:

1 Warm Up – December 17 What kind of stress occurs at a divergent boundary? What type of fault is it? What landform is created? Tension Normal Fault Fault Block Mountains

3 What are Earthquakes? The shaking and trembling that results from the movement of rock beneath Earth's surface.

4 Where Do Earthquakes Occur? Earthquakes occur along fault lines near tectonic plate edges. Near earth’s surface or deep inside.

6 What Causes Earthquakes? Stress builds on a rock, the rock shatters, releasing energy, creating an earthquake. What are the three types of stress? Tension, Compression, Shearing

7 How do scientists know which fault broke and triggered the earthquake? They use seismic waves to locate the focus.

14 Primary Waves (P-Waves) Begins at focus Arrives first Moves the fastest Move in back and forth in a straight line Move through solids and liquids; slows down in liquids.

15 Secondary Waves (S-Waves) Begins at focus 2 nd fastest to P-waves Vibrates side to side and up and down Can only move through solids; stops at liquids.

18 How are P waves different from S Waves? P waves move back and forth P waves travel through solids and liquids Fastest from the focus S waves vibrate from side to side S waves can not move through liquids Second fastest from focus

22 Describe how a mechanical seismograph records ground movement. A heavy weight attaches to a frame by spring or wire A pen connected to the weight rests its point on a rotating drum During an earthquake the seismic waves cause the drum to shake while the pen stays in place The pen records lines on the paper around the drum

26 Figure 14: How would you rate the damage to the Foligno city hall on the Mercalli scale? The damage would probably rate VII - VIII

30 What is a strength of the Richter scale when measuring earthquakes? What is a weakness? Strength: Provides accurate measurements for small, nearby earthquakes Weakness: Does not measure larger and more distant earthquakes well

35 On which scale would an earthquake’s strength vary from one place to another? Explain. The Mercalli scale because the amount of shaking that people would feel and the damage to objects would be greater in a place closer to the earthquake’s epicenter

36 Checkpoint (Page 68):What are three scales for measuring earthquakes? Explain what each one measures. Mercalli Scale Measures earthquakes on how much damage they cause Richter Scale Measures seismic waves using a seismograph Measures small and nearby earthquakes Moment Magnitude Scale Looks at the total energy released Measures large and distant earthquakes Helps scientists predict how much fault movement their was

39 Figure 17: Use the map scale to determine the distances from Savannah and Houston to the epicenter. Which one is closer? Houston 800 Km Savannah 900 km

Download ppt "Warm Up – December 17 What kind of stress occurs at a divergent boundary? What type of fault is it? What landform is created? Tension Normal Fault Fault." 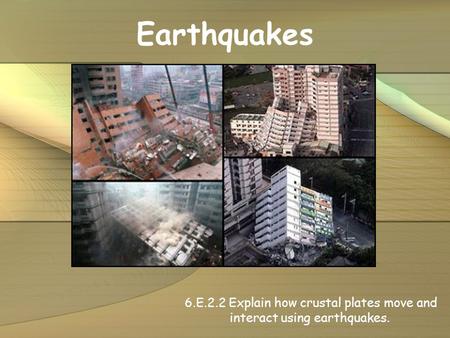 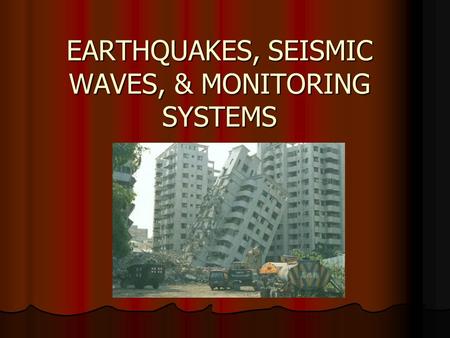